We’re all looking for some good love stories to come out of this crisis. The casual couple who decided to quickly quarantine together on a whim and then got serious. Long-term partners who decided to make it official and get Zoom married. What about friends with benefits who figured out they’re better off together exclusively? That’s what one Redditor says is happening to him—but given the history he has with his partner, he’s not sure he should tell her that he now realizes he’s in love with her.

Being quarantined with my (21m) FWB (20f) has changed things between us immensely. I think I realized that I love her, but I almost feel that telling her after so long would be unfair. pic.twitter.com/T4GnTwJGmE

After dating for about three years but not exclusively, the OP’s friend-with-benefits moved out of her dorm and in with the OP temporarily due to COVID-19. At this point, the two are able to date others but are sexually exclusive with each other—but they’ve been “really jealous” of each other dating other people.

“She has asked a couple times like a year ago why I didn’t wanna be anything more with her, all it did was cause a huge fight because I genuinely didn’t know why,” writes the OP.

Since living together, the two have been basically acting like a monogamous couple, the OP says.

“For the last two years she’s been giving me signs and I saw them but ignored them. So she stopped trying, and things were going smoothly, and I feel like a horrible guy now for wanting more when she probably is over it. It too me SO long to see how beautiful she was and I feel like an ass.”

The OP continues to explain just exactly how quarantining together has opened his eyes.

“She is the goofiest girl you’d ever know…she eats jello like 5 f***ing times a day and her face LIGHTS up when she does. She does these ridiculous dances. She has made a habit of asking me to paint and bake with her at like 4 am and I’ve never felt so like…warm? She buys my dog a treat every time she does Walmart delivery and something about that is like pure to me.”

Is the timing wrong or right?

You can read his entire (now removed) lovesick post here: 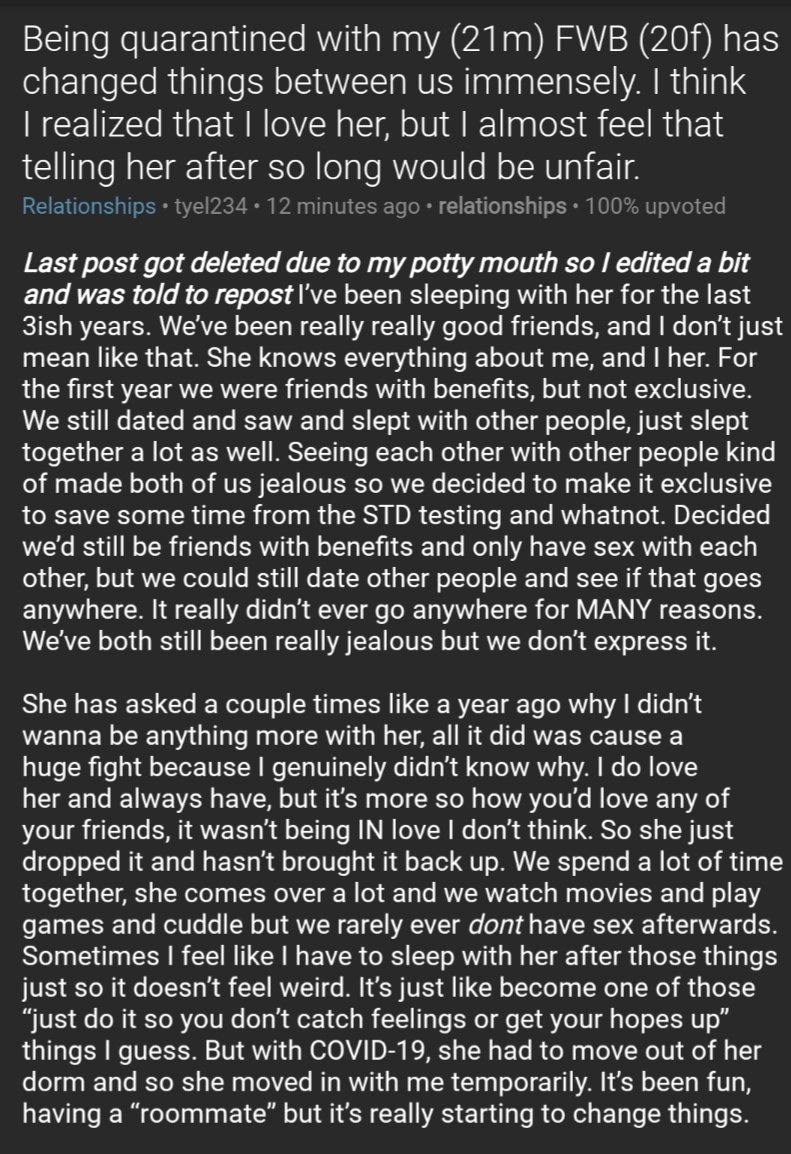 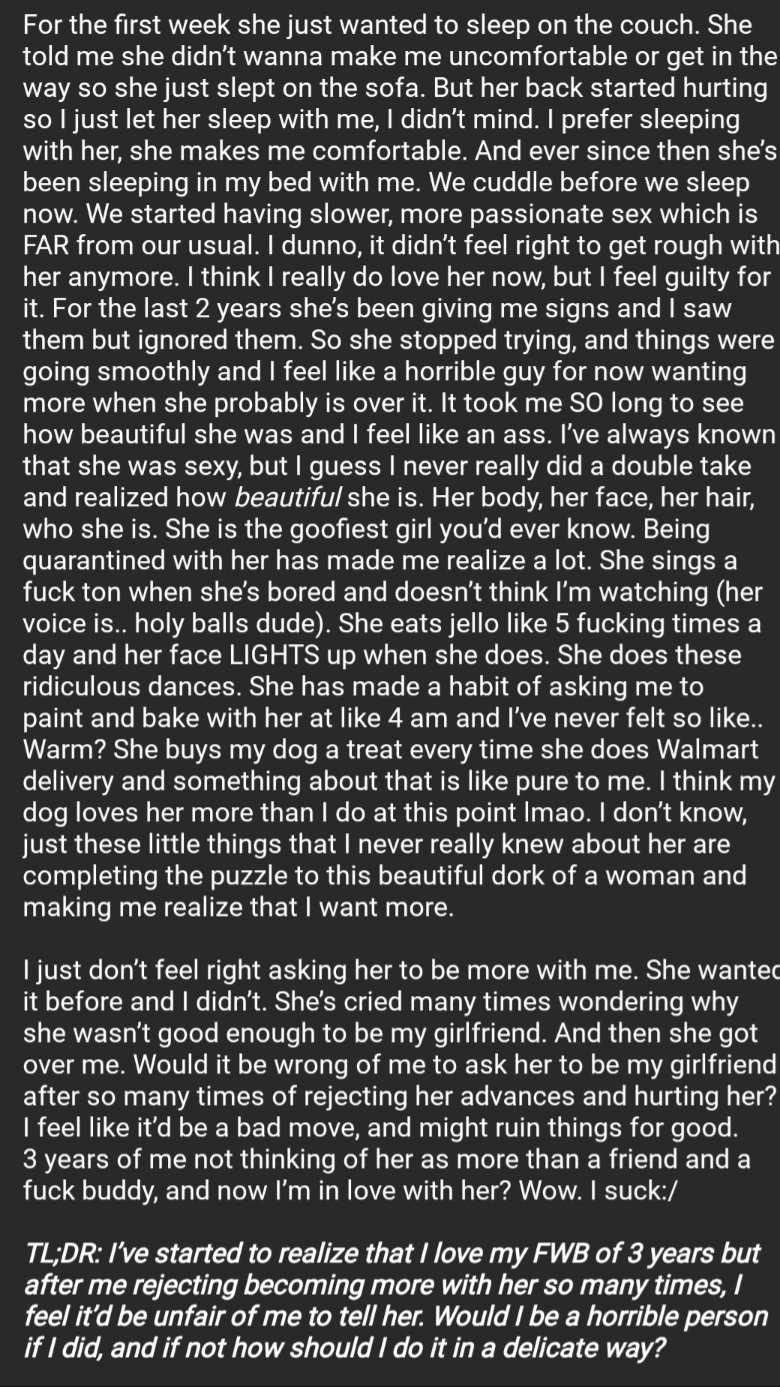 Social media chimed in, taking a real interest in this saga and offering advice. Some were encouraging and had hope for the couple.

Tell her. TELL HER. pic.twitter.com/sB3UyA7Ctg

Has this fuckboy finally become a fuckman?

The way he talks about her pic.twitter.com/Ec9jhdWnyG

Man, what you don’t know about women could fill a book. You ARE in a relationship, you doughnut. She is not moving out, I hope you realise that.

this is an unprecedented level of unprompted self-reflection for this sub, and i love it

OP, tell her what you told the internet and let the ball be in her court

also, love that OP thinks her eating jell-o is adorable, that’s how you know the feelings are real pic.twitter.com/oqnjBrGbDk

FOR THE LOVE OF GOD, ASK THIS WOMAN TO BE YOUR GIRLFRIEND AND MAYBE EVEN YOUR WIFE. THIS IS SO PURE!! pic.twitter.com/j9wlecct3z

Others said that this awesome, Jello-loving chick deserves better.

Men are and will forever be annoying and women will always settle for less than they deserve.

Okay but like they clearly have been in a relationship for years that he wanted to just call a FWB and the whole time she was wildly into him. Which makes me wonder why she continued to let him walk all over her.

Yes, he should tell her his feelings but this isn’t that wholesome

He can tell her that his reasons for not wanting more before had nothing to do with her and everything to do with him needing to grow up. That the more he gets to know her, the more he loves her and he’s an idiot for not realizing it sooner. If she rejects him, he deserves it.

I have a feeling this story isn’t over, so what do you think will happen? Love in the time of the ‘rona or a hot mess?