Welcome to another round of r/AmItheA**hole, in which Redditor u/aitathrowaway501221 asks, “WIBTA if I secretly spend my wife inheritance.” I’m just gonna say YES, but please continue. The OP writes:

My wife recently unexpectedly inherited a large sum of money from an elderly lady for whom she used to work as a housekeeper. She had worked for her for the last five years, during which time they had become quite close, as she seemed to be the only contact for her with the outside world, and to my knowledge she had no living family.

I have big plans for my wife’s inheritance, this is life changing money which should be invested rather than wasted. The problem with this though is that my wife disagrees with me. She wants to do something in the elderly lady memory and also donate some of it to some worthy causes which the elderly lady supported. While I do appreciate my wife’s generosity, I truly think this is not a good way for us to use the inheritance. I tried telling her to leave this to me while she is grieving. We had a huge argument about it which ended up with her threatening me that she won’t join bank accounts with me anymore and won’t give me access to her inheritance. I truly believe my wife is not thinking clearly at the moment and I am considering investing it before it’s too late. WIBTA if I do it? 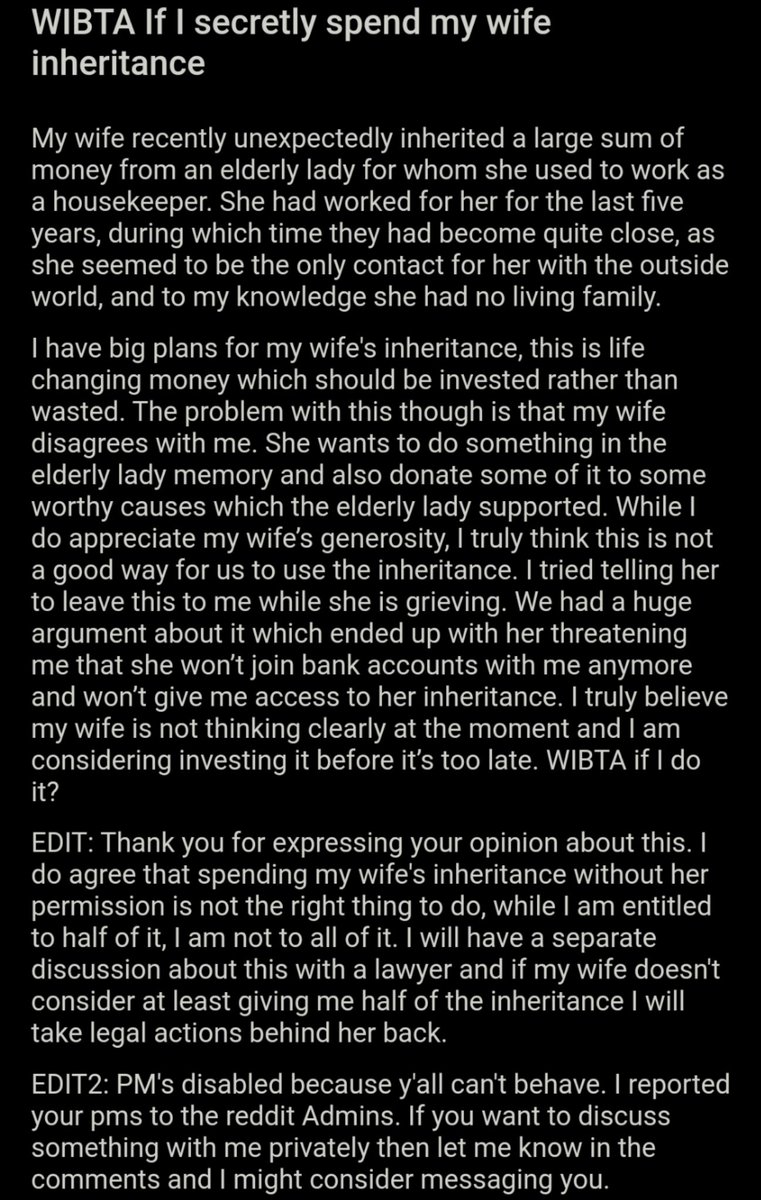 The OP seems to be under the misapprehension that he is entitled to half of it. Some financial assets are automatically split between spouses, but not inheritances, at least not in the U.S. or the U.K., as commenters pointed out: 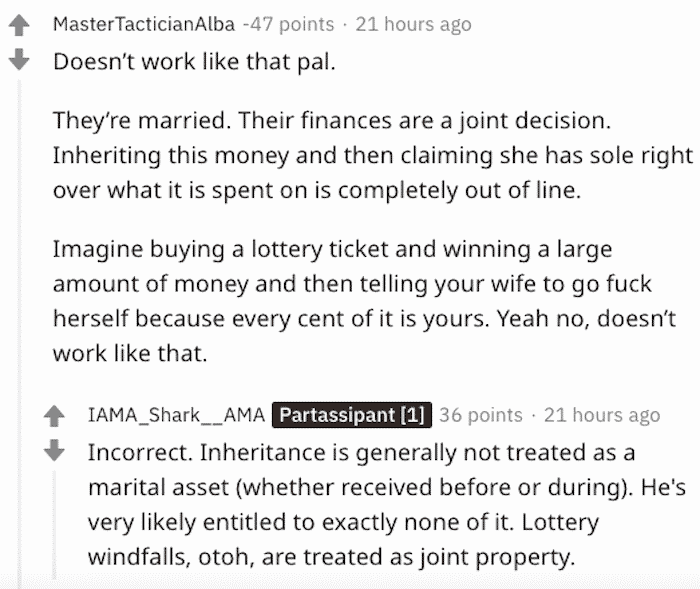 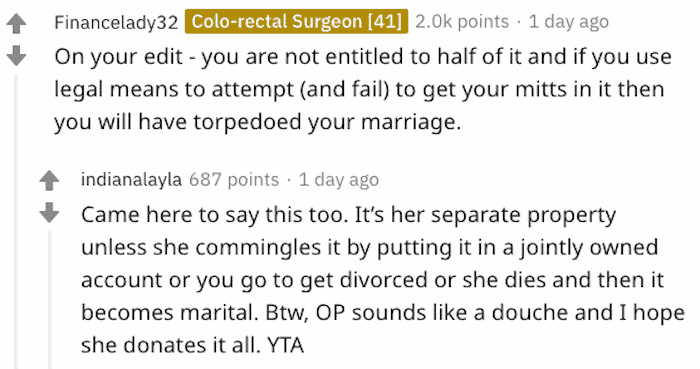 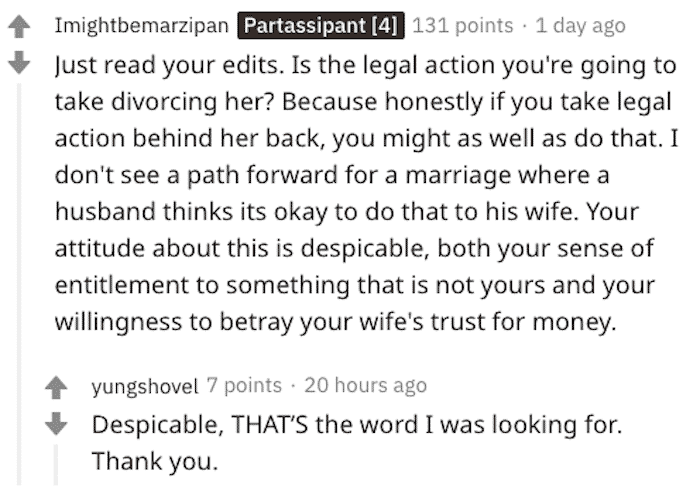 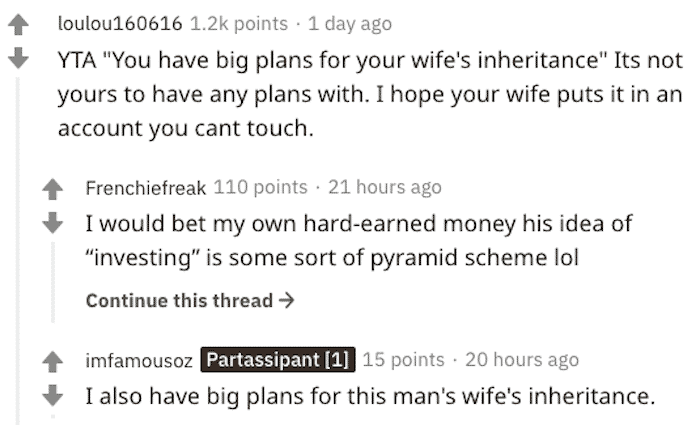 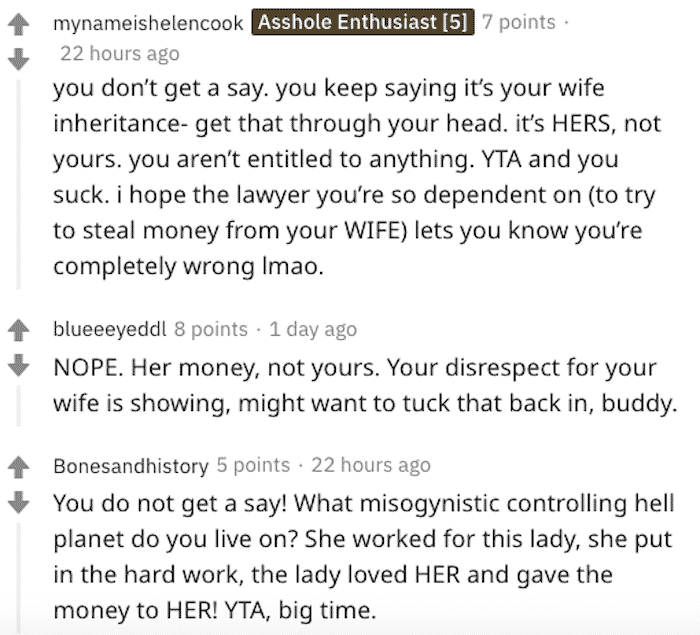 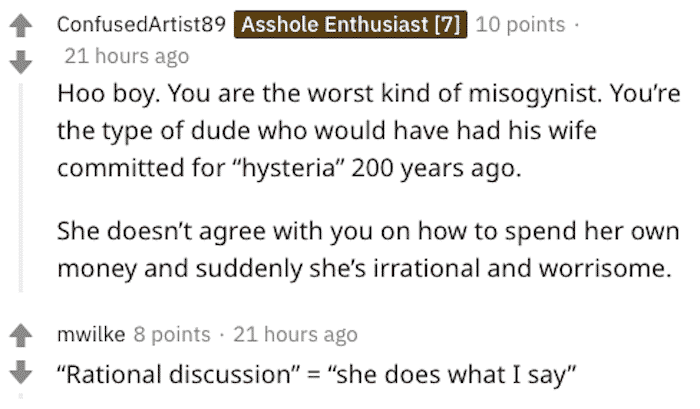 He later added an update saying he has a very secret special plan to steal the money from her and spend it how he deems fit behind her back:

I do agree that spending my wife’s inheritance without her permission is not the right thing to do, while I am entitled to half of it, I am not to all of it. I will have a separate discussion about this with a lawyer and if my wife doesn’t consider at least giving me half of the inheritance I will take legal actions behind her back.

And the post made it’s way to Twitter, where people shared his responses to commenters, which make it clear he doesn’t know the law AND doesn’t know anything about investing, so he’s really got nothing going on for him:

“Is there a law that says you get half?” Yes. “What law?” Well, I’ll have to ask a lawyer. 🙃 pic.twitter.com/zWeCGO5yJD

I can’t wait for him to talk to a lawyer just for them to let him know that it’s her money and her money only. He thinks we live in the 50s when women weren’t allowed to own property

As he’s consulting a lawyer, I think that it’s fair to say that the marriage is over.

He does seem very sure that he can do whatever he wants without losing his wife. I hope he is as wrong about that as he is wrong about everything else.