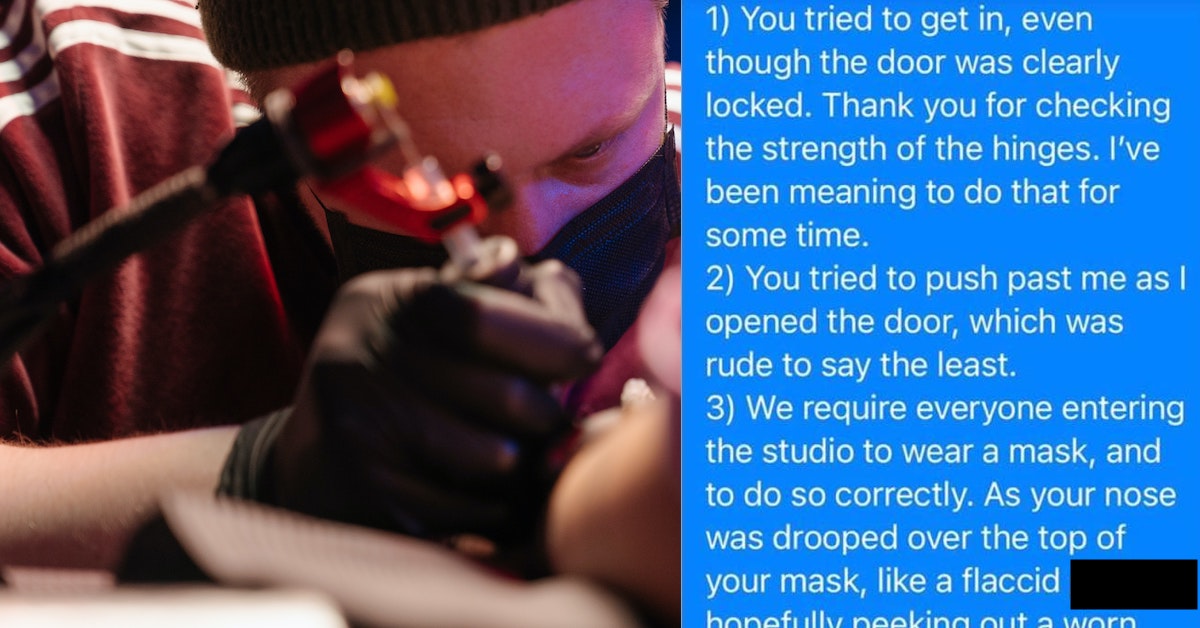 The stereotype of the entitled customer demanding to speak to the manager is a very specific image that usually involves a woman with a duck butt haircut. But entitlement can come from anyone. Even a man who is absurdly determined to get a tattoo from someone who hates him.

This text convo was posted to Reddit on r/F–kYouKaren by u/deckchair1992 under the title “Male Karen tries to get a tattoo.”

It starts with the male Karen in question asking for assistance, receiving an auto-reply asking for tattoo details and then launches to the following day. At that point, the Karen is incensed after a failed attempt to go into the parlor and book a tattoo appointment. He says he was told that he would not be booked on his chosen date even though he’s been thinking about this tattoo “for a year.” Okay? So? But he wasn’t done there. 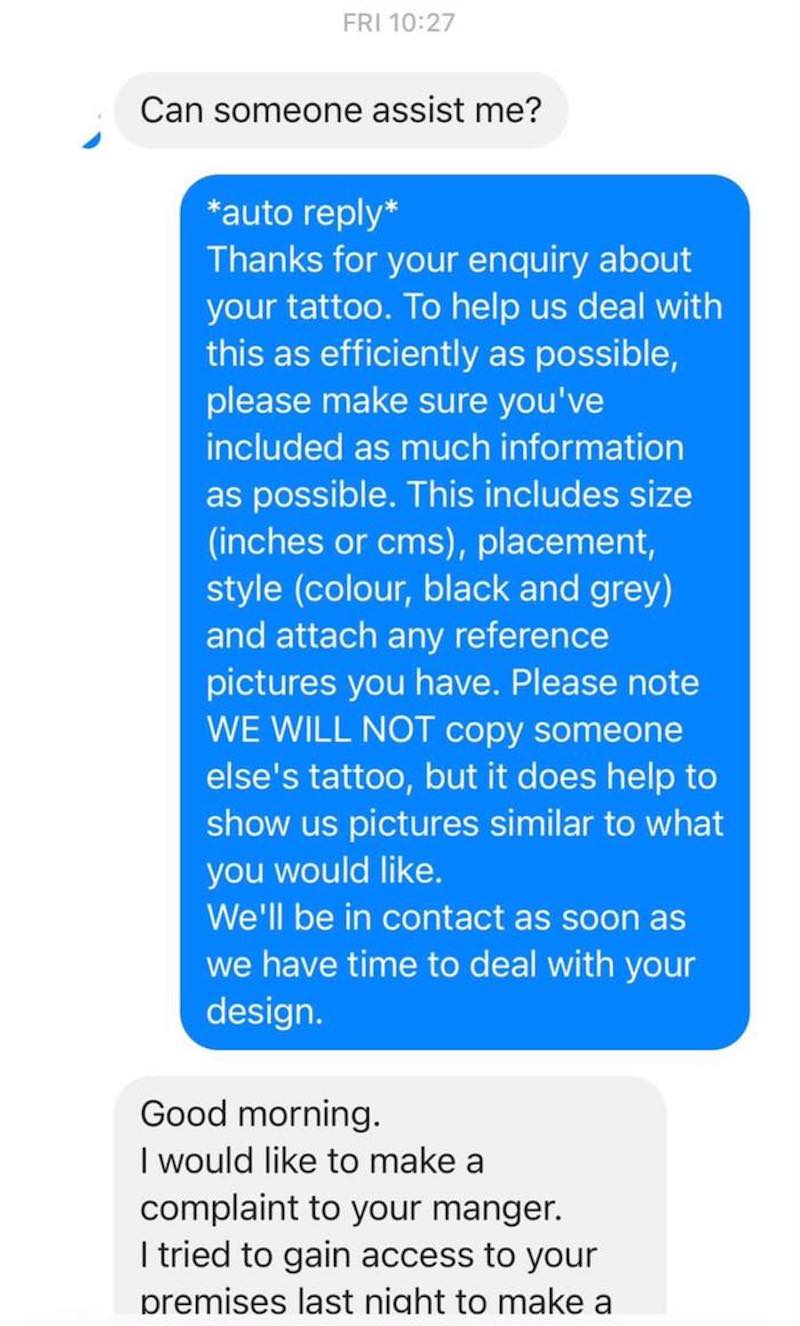 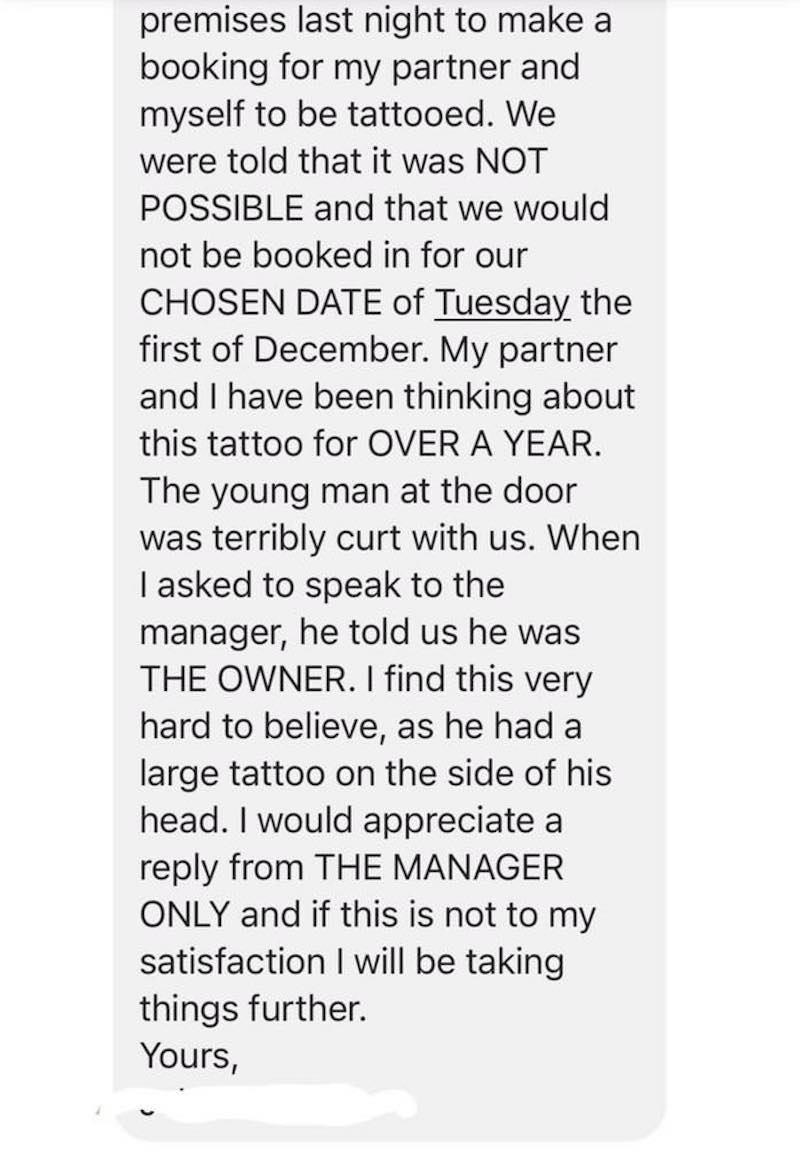 “The young man at the door was terribly curt with us,” added the Karen. “When I asked to speak to a manager, he told us he was THE OWNER. I find this very hard to believe, as he had a large tattoo on the side of his head. I would appreciate a reply from THE MANAGER ONLY and if this is not to my satisfaction I will be taking things further.”

This is so weird—if anyone is going to have a tattoo on their face it’s the owner of a tattoo parlor. Also, talking to a manager is a downgrade from talking to an owner, but I guess it’s with a manager that a tattoo artist feels most powerful. The tattoo artist and OWNER had quite a reply.

“I’m David and I am the owner of the studio,” David replied. “But what is ownership anyway, and for that matter the title of manager? Are they not just man-made constraints imposed by the naive and insecure, desperate to find meaning in  their otherwise directionless lives?”

Then he outlined the reasons Mr. Customer was not admitted: the dude tried to rock the door off its hinges when he realized it was locked, when David opened the door he shoved him, he had his nose peaking over his mask like a “flaccid penis,” and it was 7:45pm and they were “f–king closed!” 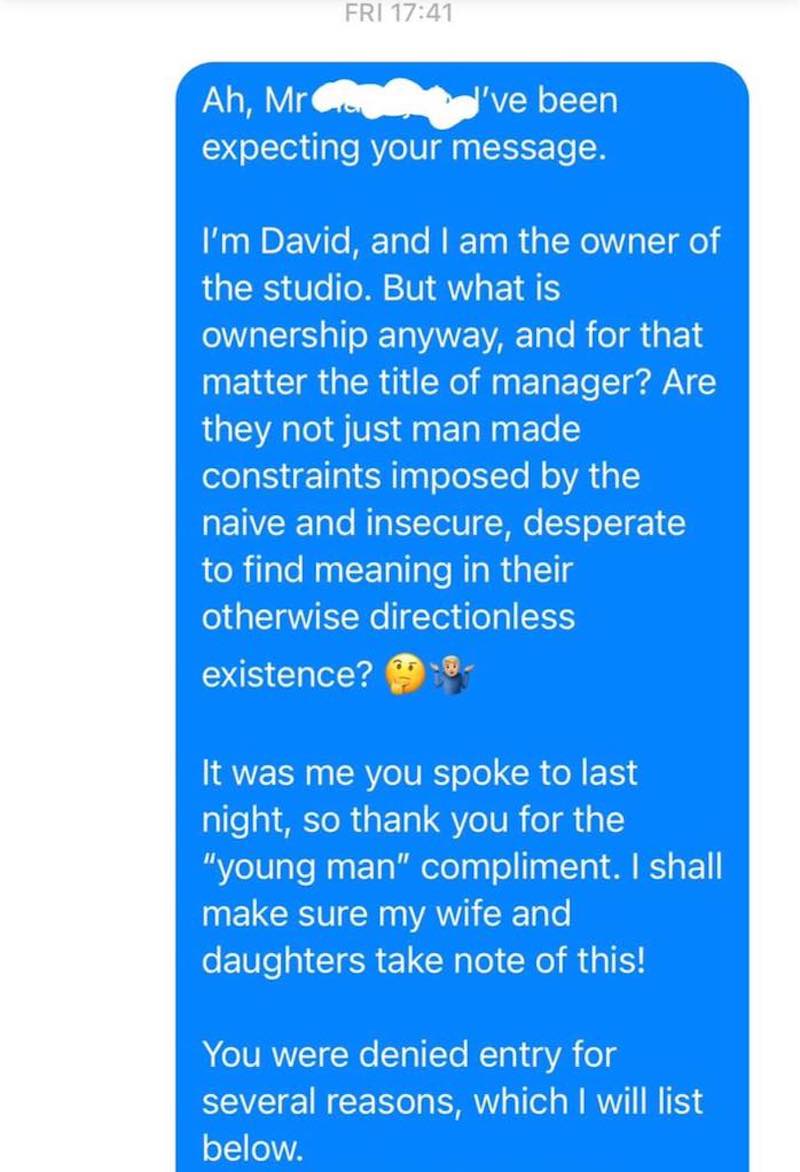 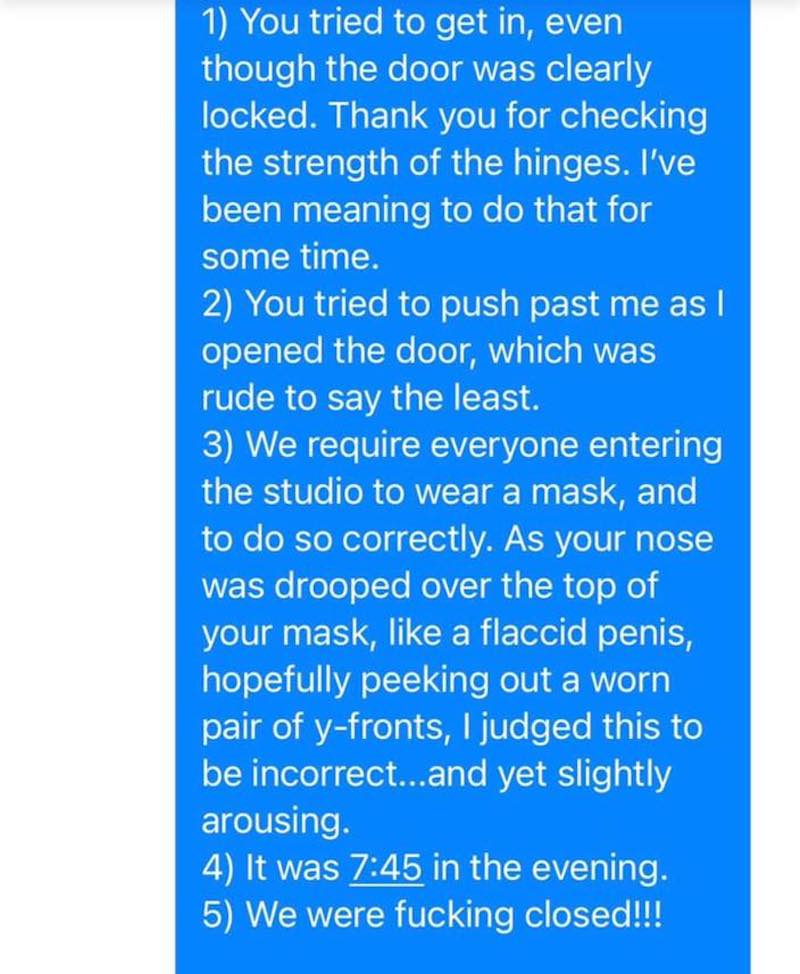 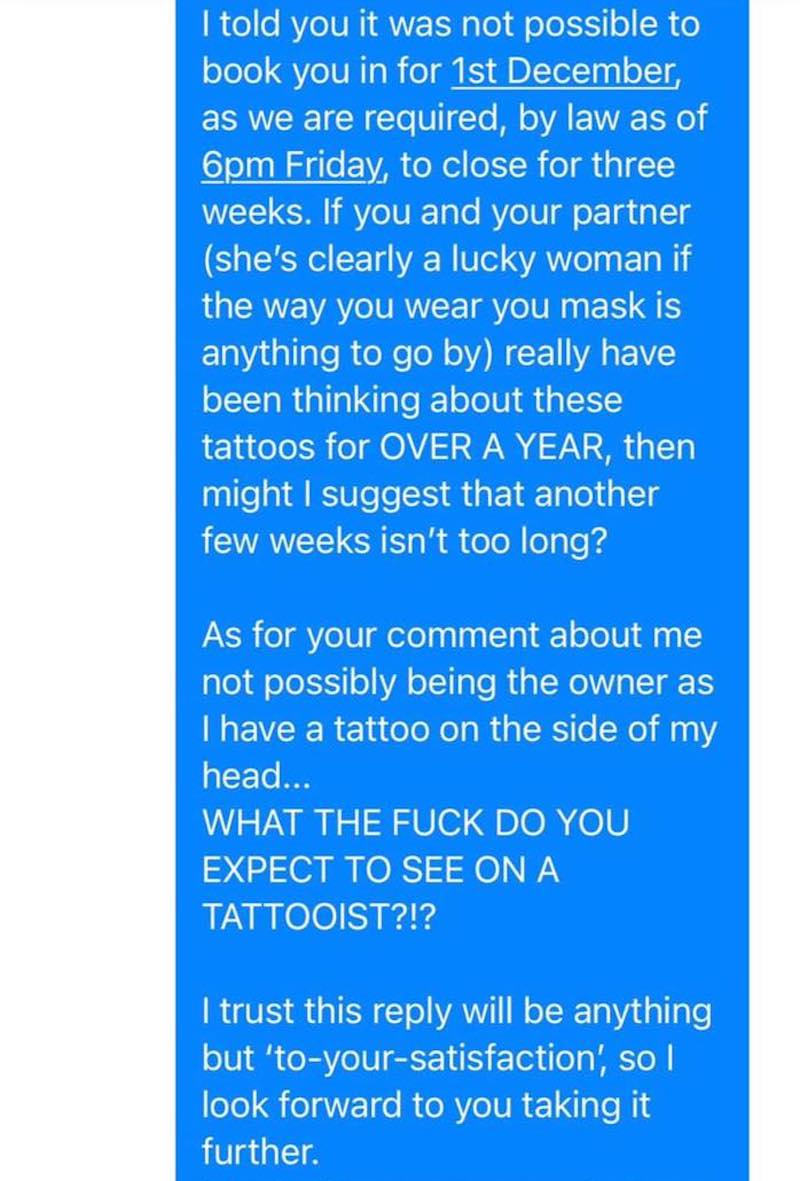 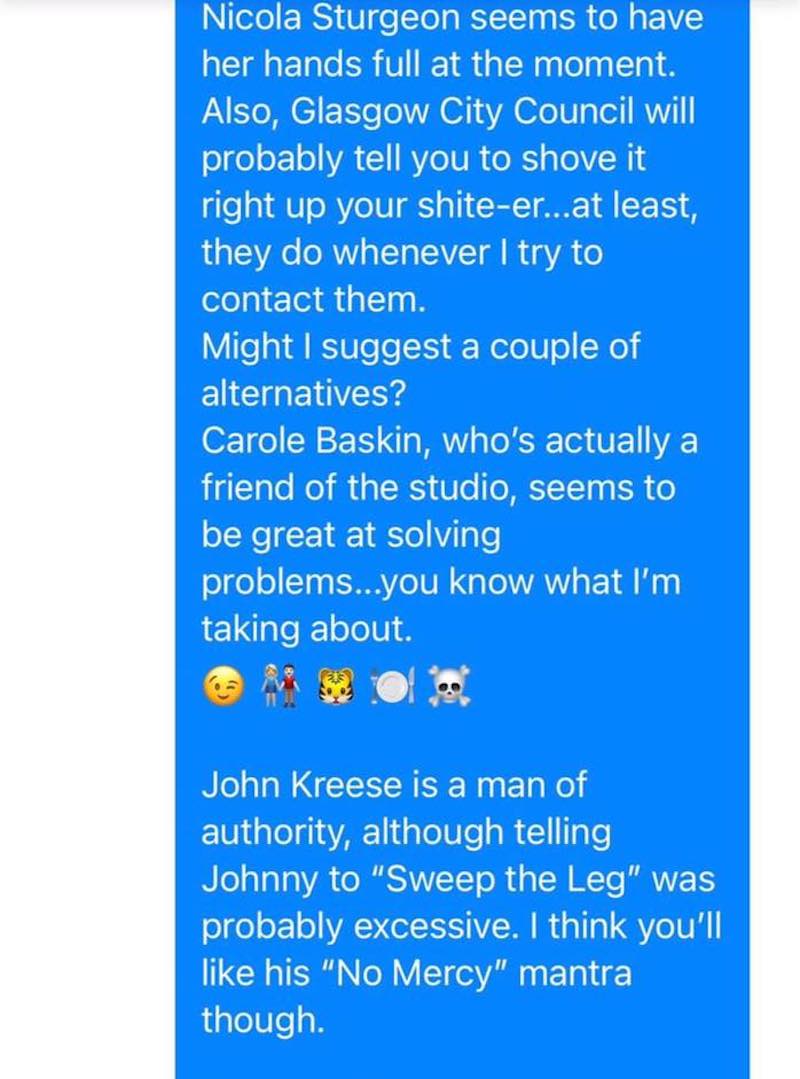 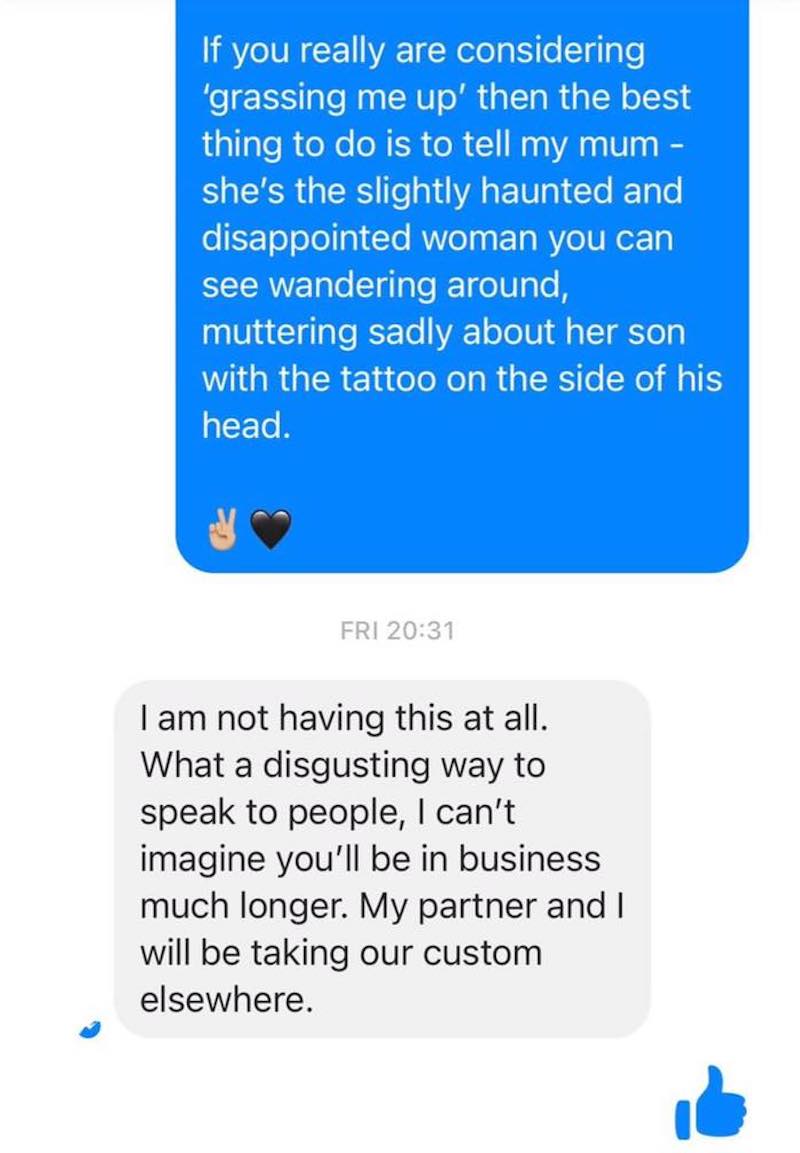 David then suggests a few crazy places the Karen could get tattooed instead, which leads to them saying he’ll be taking his “custom” elsewhere.

The tattoo artist then tells him that making fun of terrible people is kind of his thing.

The Karen then says that the tattoo artist does not have the right to block access to his private business (not true) and they’ll be contacting the proper authorities, whoever that is supposed to be. “Although I am now sure we won’t be requiring YOUR services,” they conclude. 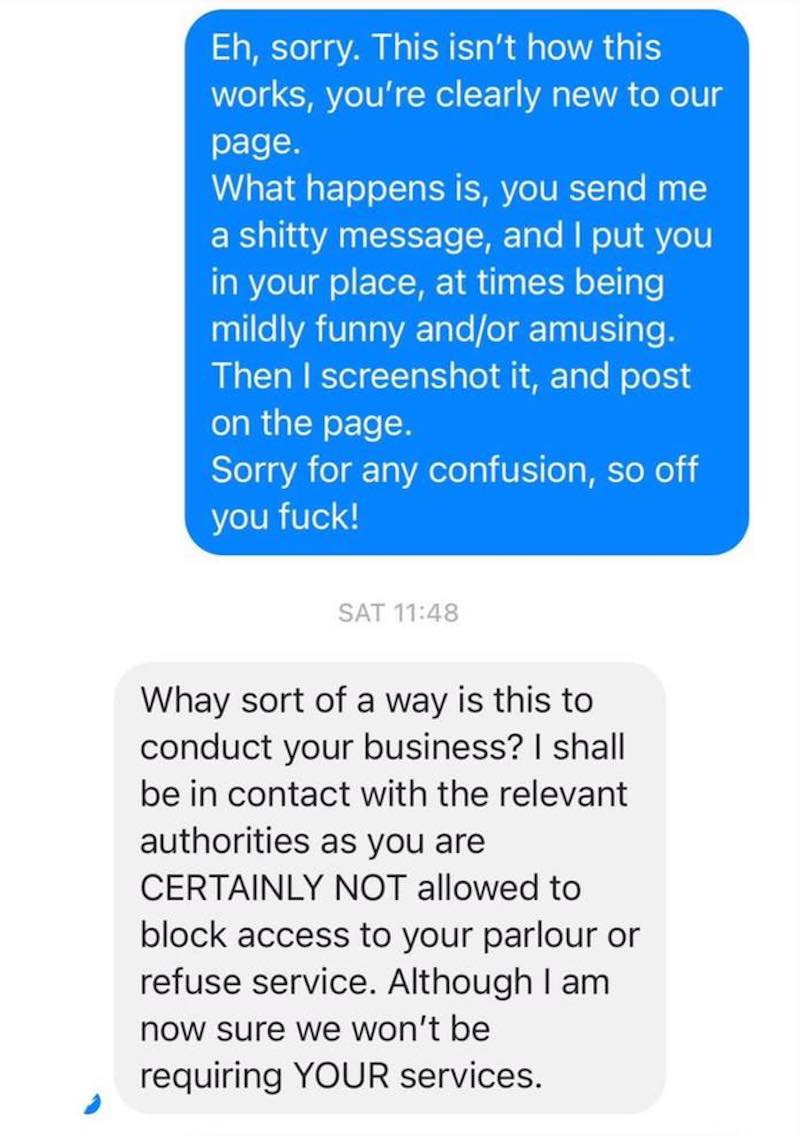 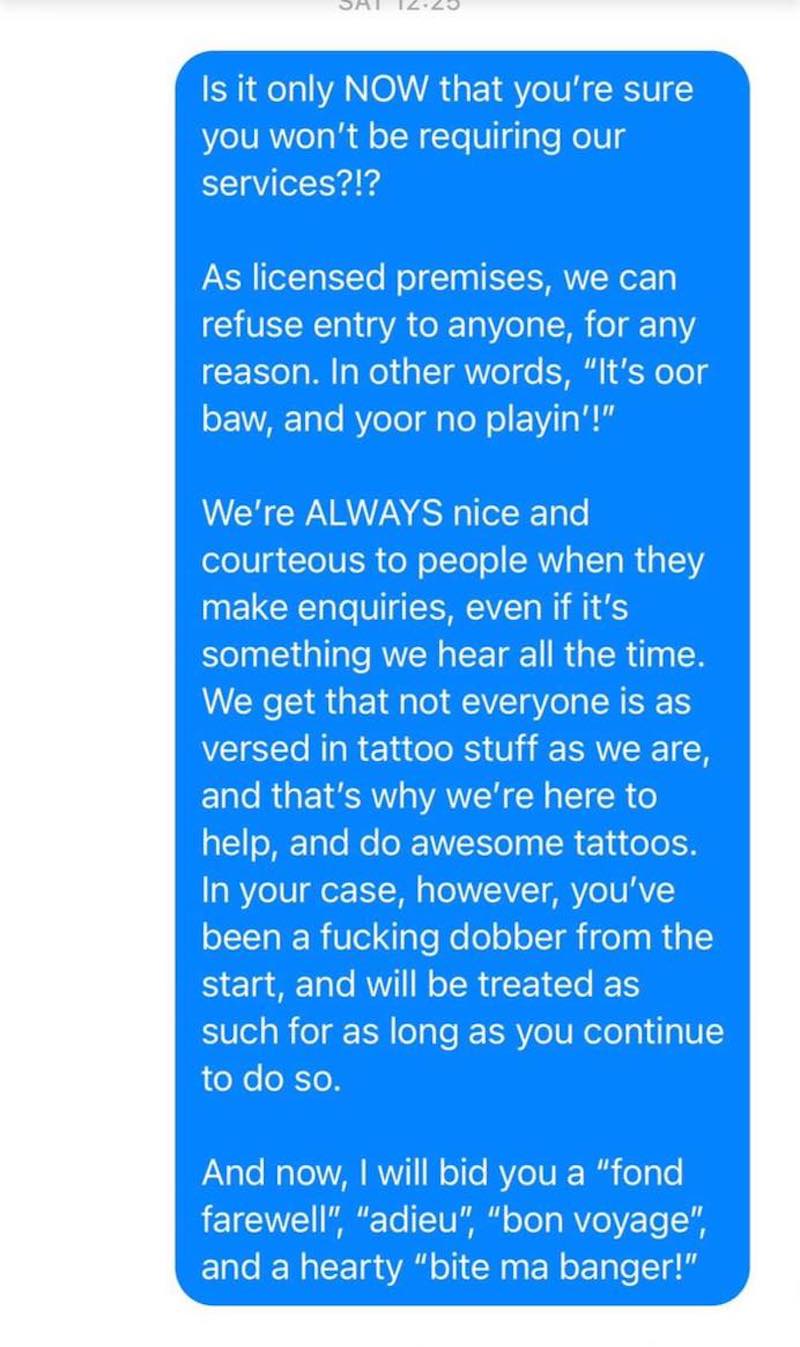 David explains that as a private business he can do what he wants and tells the Karen to “bite ma banger!” Perfect sign off.