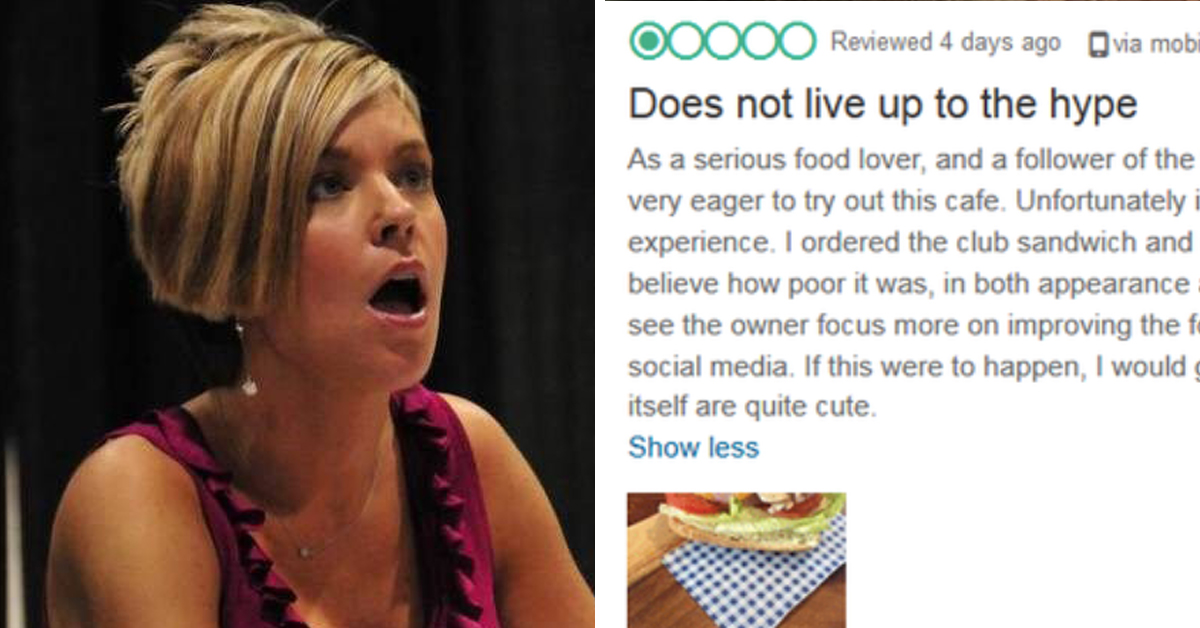 Other times restaurants don’t do anything wrong at all, but customers just want to blame the world for their unhappiness, so they vent on Yelp or Trip Advisor. For example, one of our favorites that actually got a reply… 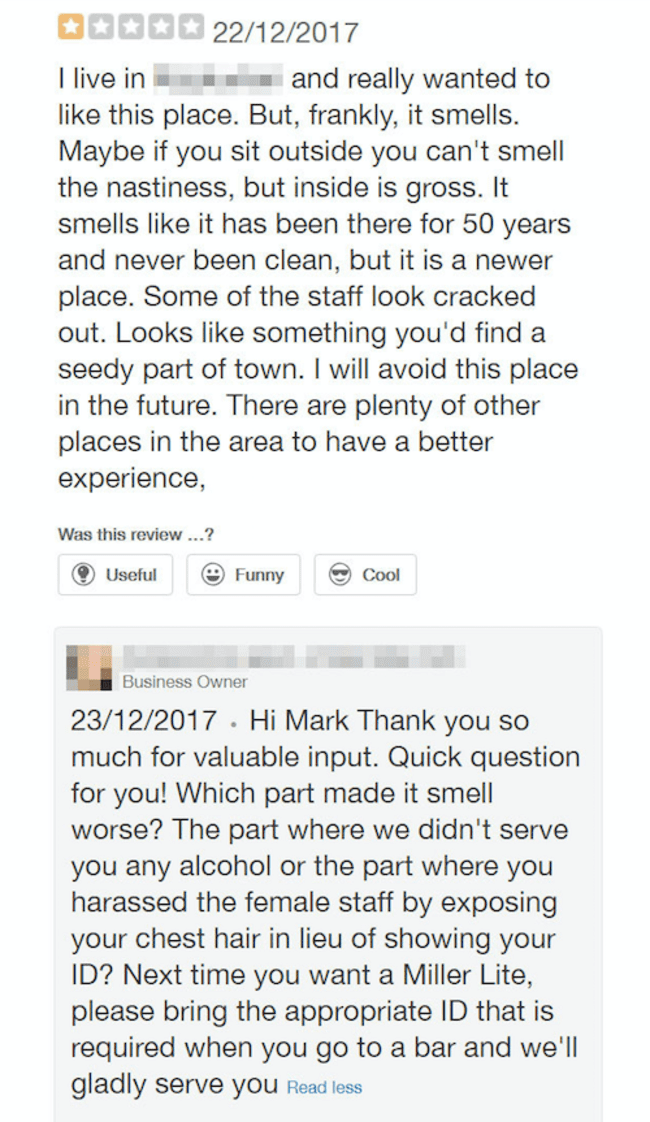 But sometimes a witty reply isn’t enough, and there’s a backstory.

In the case of one Dublin cafe, the owners found out exactly how twisted the backstory was behind their one-star review.

It all started with a visit from a customer who was not happy with her order and took to social media to gripe. 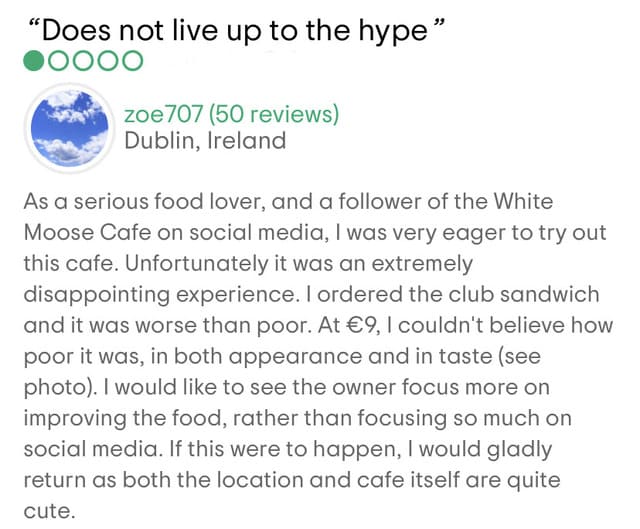 “As a serious food lover, and a follower of the White Moose Cafe on social media, I was very eager to try out this cafe. Unfortunately it was an extremely disappointing experience,” the foodie writes. “I ordered the club sandwich and it was worse than poor…I would like to see the owner focus more on improving the food, rather than focusing so much on social media.”

Instead of letting the bad review stand, the owners of the White Moose Cafe took to social media to explain what exactly happened: 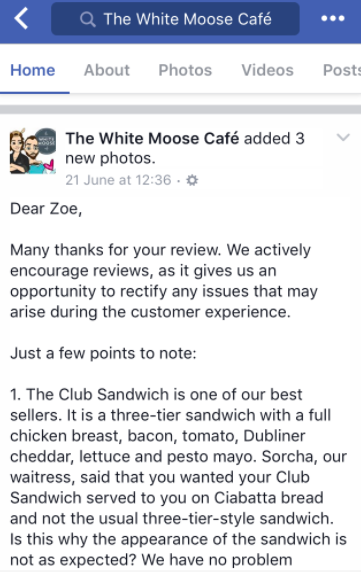 “The Club Sandwich is one of our best sellers,” they start. “It is a three-tier sandwich with a full chicken breast, bacon, tomato, Dubliner cheddar, lettuce, and pesto mayo. Sorcha, our waitress, said that you wanted your club sandwich served to you on Ciabatta bread and not the usual three-tier-style sandwich. Is this why the appearance of the sandwich is not expected?”

Then they got a bit snarky. 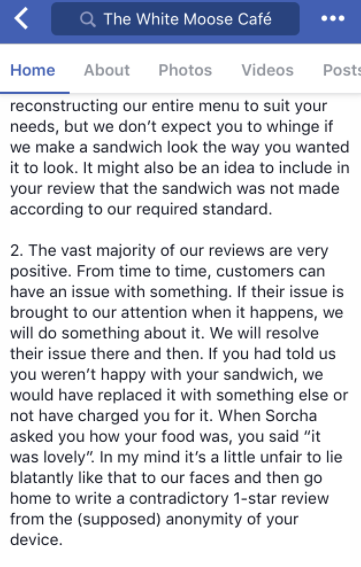 “We have no problem reconstructing our entire menu to suit your needs, but we don’t expect you to whinge if we make a sandwich look the way you wanted it to look. It might also be an idea to include in your review that the sandwich was not made according to our required standard.”

And then the owners really gave it to this cranky reviewer.

“If you had told us you weren’t happy with your sandwich, we would have replaced it with something else or not have charged you for it. When Sorcha asked you how your food was, you said “it was lovely.” In my mind, it’s a little unfair to lie blatantly like that to our faces and then go home to write a contradictory 1-star review from the (supposed) anonymity of your device.”

Then, the owners explained that they were actually able to identify her identity because the person had accidentally added them as a friend on their personal Facebook. Whoops! 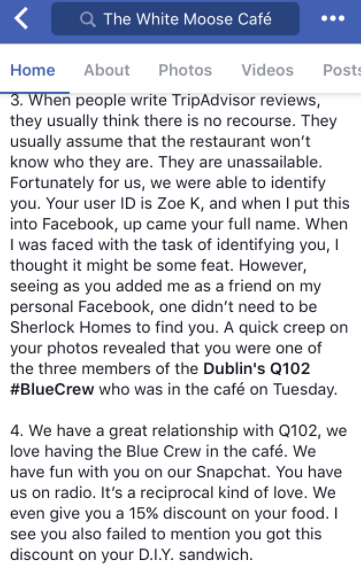 Because the owners were able to identify the reviewer as a member of a radio show, they were also able to say that this person received a 15% discount on the sandwich—something they failed to say in the bad review. 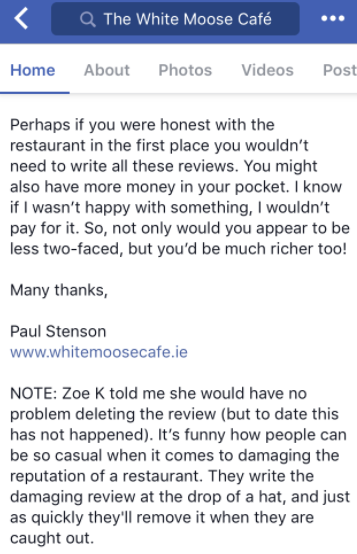 Apparently, the reviewer Zoe K. said she would delete the review—but hasn’t yet.

“It’s funny how people can be so casual when it comes to damaging the reputation of a restaurant,” said owner Paul Stenson. Maybe next time before she leaves a bad review, Zoe K. will think more about her experience—and if she’s left any important details out.