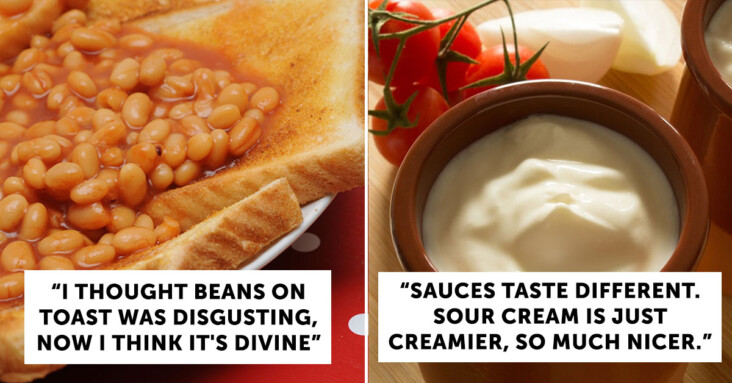 It turns out not everywhere is exactly like the United States! Who knew? TikToker yorkshirepeach moved to the UK and shared her thoughts on what adjusting to life was like and the things that shocked her the most.

She shared that how strange it is that people can legally drink at 18 (or 14 with their parents) and that parallel parking is everywhere, which sounds like a real nightmare.

Her experiences are an interesting take on what it’s like living abroad and eye-opening that people actually think beans on toast is a good breakfast idea. Make it make sense!

When I first moved here my husband had to go to his great uncle’s funeral. And he was gone for like 7/8 hours and he came back completely wasted. And I had no idea that people drank after funerals! And then we went to a kid’s birthday party I mean, the kid was turning like 3? And they had the beer, the wine, I’m like okay, okay. And I’m an alcoholic so I don’t drink, I can’t drink. And when we lived in the States together, I did kind of wonder, like? Is this man an alcoholic as well? And then we moved over here and I was like nah, he’s just BRITISH

Things that’d freak Americans out about the UK: Driving in the UK. No chance, okay? The driving test. What you guys have to do to be able to legally drive here is amazing! You guys are all like Nascar drivers. Literally, I took my test in a parking lot in the States.

Meals I’d never had until I moved here: “beans on toast.” Thought it was absolutely disgusting, now I think it’s absolutely divine

That things costs EXACTLY what they say they cost. So if something says it’s £1 then it’s £1. At home there’s sales tax on everything so it’s $1.26

Things that taste different in the UK: Sweets, You don’t realize it until you’ve lived in the UK for a while and then you go back and taste an American sweet that you realize you can taste the artificial flavors more.

Meals I’d never had until I moved here: I know this is a side dish but it’s an absolute gamechanger. Cauliflower & Cheese. Absolutely ELITE

Meals I’d never had until I moved here: Fish & Chips. We don’t have fish & chip shops back home. We have something called Captain D’s. It’s a franchise, like McDonalds, where you drive through.

Things that taste different in the UK: Pickles. We have the big fat sour pickles. I miss those. Yours guys seem to be sweet.

Things I’d never done until I moved to the UK: Parallel parked. I still struggle, If I’m honest. It’s a struggle

Things I’d never done until I moved to the UK: I’d never had sweet popcorn in the cinema

Things I’d never done until I moved to the UK: Sat outside in the sun with a coat on

Meals I’d never had until I moved here: The curry. Never had a curry before I moved here. And now if I go 4/5 days without one, I go into curry withdrawal. Absolutely DIVINE meal

That you have to pay to park most places. I kinda thought it was a “well, you can pay if you want but you don’t really have to”

Things that’d freak Americans out about the UK: The queues at McDonalds! I don’t know about your McDonalds but my McDonalds stays LIT! And by lit I mean on fire! People wrapped around the building and y’all wait. The Americans would not wait in that queue, do you hear me? They would drive two blocks down to the next McDonalds. There’s a McDonalds on every damn corner

Things that taste different in the UK: Sour cream. All things creamy. It’s just creamier, so much nicer (in the UK)

What my husband has been doing now I call sun shifting. As the sun shifs he will shift his chair closer and closer until the edges all the way to the corner of the garden

Things I’d never done until I moved to the UK: I’d never stayed at an outdoor event in the rain, and not gone ho

Things that’d freak Americans out about the UK: What y’all eat for breakfast. OMG. If they saw: The Mushrooms, The Tomatoes, The Baked Beans. All of this, the “Full English”. Absolutely flip out, okay?