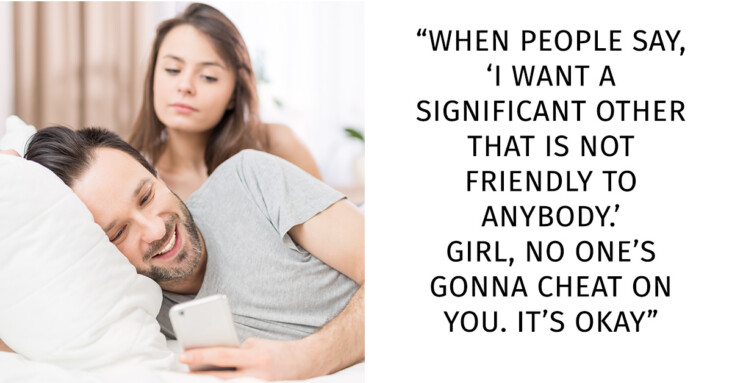 Have you ever met someone everyone else seemed to really like and you just didn’t get it?

It can feel like you’re taking crazy pills when a person you view as being problematic is someone everyone else likes to be around.

So many toxic behaviors have become ones that society sees as romantic in relationships or a characteristic of a good friend.

Even outside of relationships, habits like interrupting other people or not listening to them so you can say your story might not feel “toxic,” but they don’t make people feel good about themselves.

Let’s not let it slide!

People on TikTok are talking about these toxic behaviors in response to singer and songwriter Naya Ford’s video asking:

(Scroll to the end of the article for full video)

“People who think it’s a goal or make it their mission to change someone. Not only is that a waste of your both their time because in my personal opinion people don’t change they become what they were supposed to be. In some instances you can help somebody to help who they are or whatever but at the end of the day they did it themselves, honestly I don’t think you get to take that credit.

You are taking their moment of self discovery or their self-love and acting like it’s your responsibility, or that you’re the reason for it. Not saying that you can make somebody happy, but at the end of the day happiness with oneself must be found by oneself. They have to to realize that they’re happy you can’t make it happen. So to think that you can change someone, their attitude, their style, whatever you can possibly to all that but it’s not gonna do as much good as you think.

At the end of the day you are turning them what you want them to be instead of who they’re meant to be and that’s selfish.”

2. Being blunt is usually being mean.

“Y’all please because imma need y’all to listen to this one real quick. One of the biggest pet peeves of mine and it comes a lot in friendships and is the reason why a lot of my friendships have ended is that people will try to pass off being a complete a-hole as them being “blunt.”

My thing is I get the whole “I like to tell how it is” type of thing BUT there’s a difference between telling people how it is and completely bringing everyone around you and I thing a lot of people get that mixed up. And what really bothers me is that a lot of people won’t see the wrong in them doing this.

And then they have the nerve to be surprised when no one wants to be around them. Like sis maybe if you didn’t point out all my insecurities.”

3. You need to care about your friends.

“For me, it’s people who think that caring the least is cool and [that] it gives you an upper hand over people who care about you. That’s so toxic. If you value them and want them in your life, show up for them in your way — in the best way you can. But don’t treat people less than just because you know they care about you and they’ll be there for you.

Don’t [take them for granted] because you think they’ll always be there, because one day you’ll wake up and they won’t be. And let’s care about people who care about us, and let’s show up for each other.”

It’s fine to be there, no questions, but…sometimes you should really ask a few questions, don’t you think?

5. Lying about your relationships.

“The perfect marriage that you think you have, that you post all over social media. You’re trying to set some kind of standard that’s impossible. Marriage is hard; it’s not always fun. It takes patience and work and compromise.

And if you have issues in your marriage, you’re not broken — you’re normal. Because no one in marriage is perfect.”

6. Stop trying to control everyone.

“When people say, ‘I want a significant other that is rude and mean and not friendly to anybody.’ Girl, no one’s gonna cheat on you. It’s okay”

7. It’s something to take seriously.

“Mental health issues. Having a mental issues is not a little quirk of personality, no that’s not it. And it’s the same people that get upset when people don’t take their mental health seriously but when you treat is as a quirk who is gonna take it seriously.

“This concept of ‘no new friends’ — we gotta cut that out. You close yourself off from meeting people who could become a better friend than the one that you have. ‘Cause that friend is probably toxic.”

“Working two or three jobs just to survive and make ends meet so you don’t even have time for your family.”

“Impulse shopping isn’t a problem. It’s a symptom of a deeper problem.”