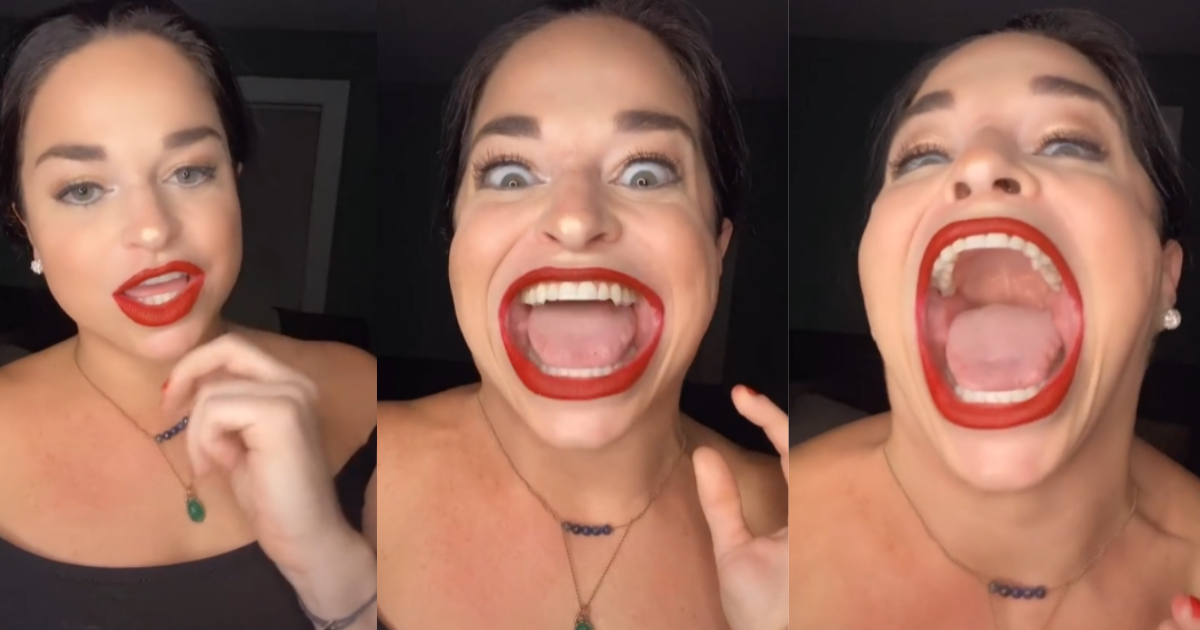 Samantha Ramsdell believes she can beat the Guinness World Record for largest mouth. The current record holder’s piehole comes in at 3.75 inches from upper to lower incisors. Ramsdell believes her mouth is almost four inches.

Regardless of whether she’s the record holder or not, Ramsdell is racking up the followers and views with her TikTok account.

Like many of us, Ramsdell began posting more on TikTok during the COVID-19 lockdown and noticed that any videos of her mouth received the biggest attention.

Being one of TikTok’s top creators, Ramsdell gets paid 0.3 cents per 1,000 views. It doesn’t sound like a lot, but adds up if you’re like Ramsdell and racking up nearly 1 million views per video. In fact, this Halloween-themed video received 5.5 million likes and 57.6 million views.

People love Ramsdell’s mouth so much that they often ask her to eat certain foods. Here she is chowing down on a Subway sandwich:

One person wanted to know how she eats apples.

Reply to @timmydiaz05 do you guys really wanna see this 😂what else should I eat?

Her fans also ask questions about what it’s like to live with a nearly four-inch mouth:

Reply to @mila.kitty.leo I promise it doesn’t hurt it’s just my mouth 😂🤪

Reply to @mwangifiii2 some of these questions though 😂 #lol

One TikTok user wanted to know what Ramsdell looked like as a child and the answer is oh-so delightful.

Reply to @nevaeh_hehe0 #greenscreen always had a huge mouth 😂😂😂

You can tell Ramsdell is having fun with it. Her posts are goofy, humorous, and she’s incredibly active with her fans. Here she is using a popular clip from Mean Girls that’s so appropriate:

However, she recently admitted to LADBible that she wished her performing videos received as much attention.

“It is a little frustrating sometimes because I wish I could also be known for my singing and comedy videos too, but hey, any press is good press!”

Below are a few of Ramsdell’s comedy and music TikToks, ’cause a woman is much more than a (remarkably large) body part.

Reply to @kevincallen benefits of a big mouth 😬 comment more songs for me to try!!!!

No idea who Jerome Walters is 😂

Reply to @rubigabriela don’t mind if I do 😂