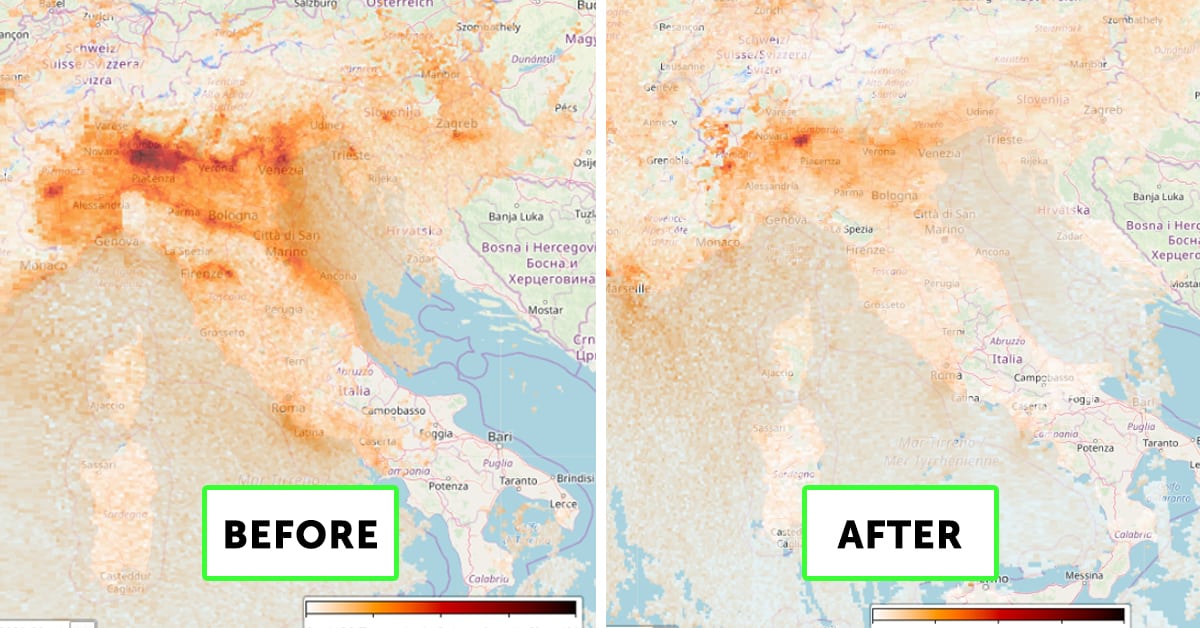 The coronavirus pandemic caused by the rapid spread of COVID-19 across the globe has had societal impacts unheard of in modern times. These include massive quarantines, travel restrictions, and lockdowns of businesses and public gathering places that have ground business as usual and daily life as we know it to a halt.

But, as the saying goes “Whenever God unleashes a global pandemic, he opens a window.” The silver lining in this particular global catastrophe may be environmental—a reduction in air pollution that contributes to climate change thanks to quarantines slowing human activity. The quarantines currently in place in much of the world mean that the number of cars on the road and factories actively belching out CO2 has been greatly reduced and the effect has been so immediate that it can be seen from space.

NASA researcher Santiago Gassó tweeted satellite images that show a drastic decrease in nitrogen dioxide (NO2) in Northern Italy in the wake of coronavirus quarantines there.

In one month, there is a clear decrease of NO2 levels (a pollution marker) in northern #Italy according to the satellite sensor @tropomi @avoiland @elisa_ox @blefer @rjswap pic.twitter.com/FnSz4AtT8q

The images, taken over a period of less than a month, are striking. 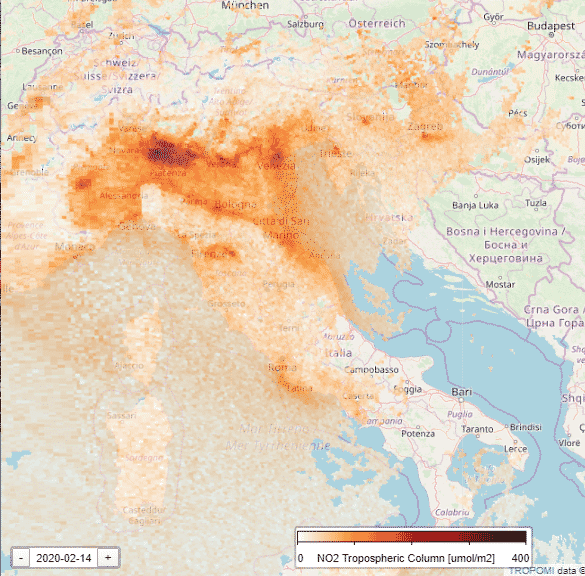 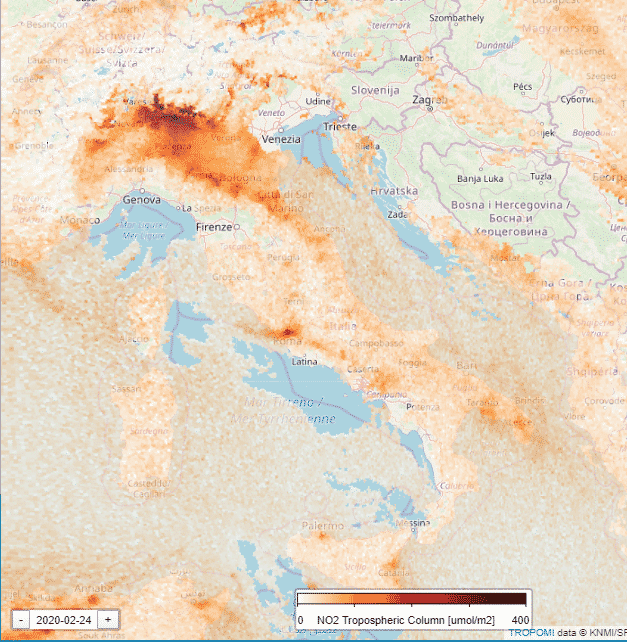 There was a particularly noticeable drop in NO2 levels in Northern Italy between March 4th and March 8th. 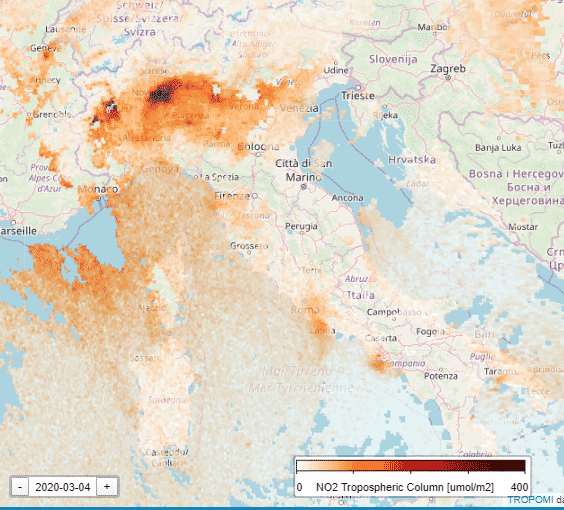 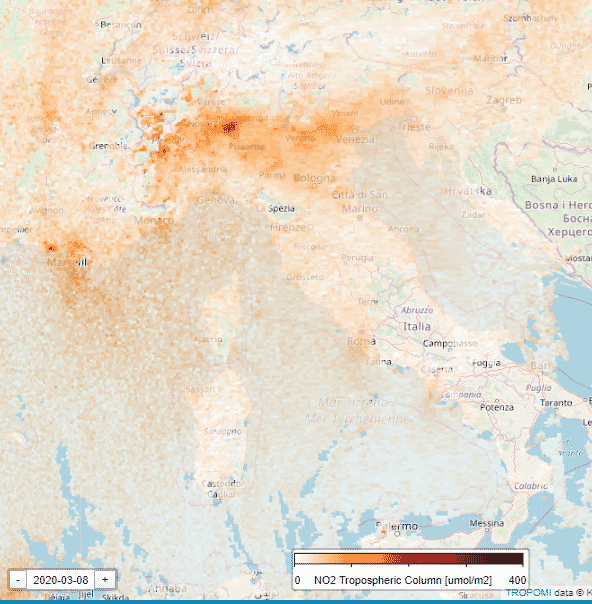 You can see an animated visualization of the data in the video below from the European Space Agency.

NASA also recently released images that show a stark reduction in air pollution in China that is directly linked to the coronavirus outbreak and the ensuing quarantines.

The closeup images from Wuhan, China where the outbreak that led to the current pandemic began are particularly astonishing.

Once quarantines were put in place pollution levels in Wuhan dropped drastically and didn’t rebound as they would have if it were a mere fluctuation or simply due to the Chinese New Year holiday.

#Coronavirus: Amid efforts to reduce pollution in #China, the signal from quarantines remains clear.

Unlike the past, activity levels have not rebounded after the Chinese New Year. New reporting from @KashaPatel & me https://t.co/Wa88eF1Rzv #maps #dataviz pic.twitter.com/5tdYg40CaC

Further proof of the link between the coronavirus quarantines and pollution levels is provided when those restrictions are eased and air pollution rebounds.

Levels of nitrogen dioxide pollution are inching back up over China. Definitely not a surge above pre-crisis levels, just factories and transport starting to run again. Steep drop in northern Italy. pic.twitter.com/8vY3zcYU9k

As the Centre for Research on Energy and Clean Air points out, pollution levels in China where the outbreak is now more controlled have begun creeping up again whereas they are still greatly reduced in Northern Italy where the crisis is still more severe and which is on lockdown. 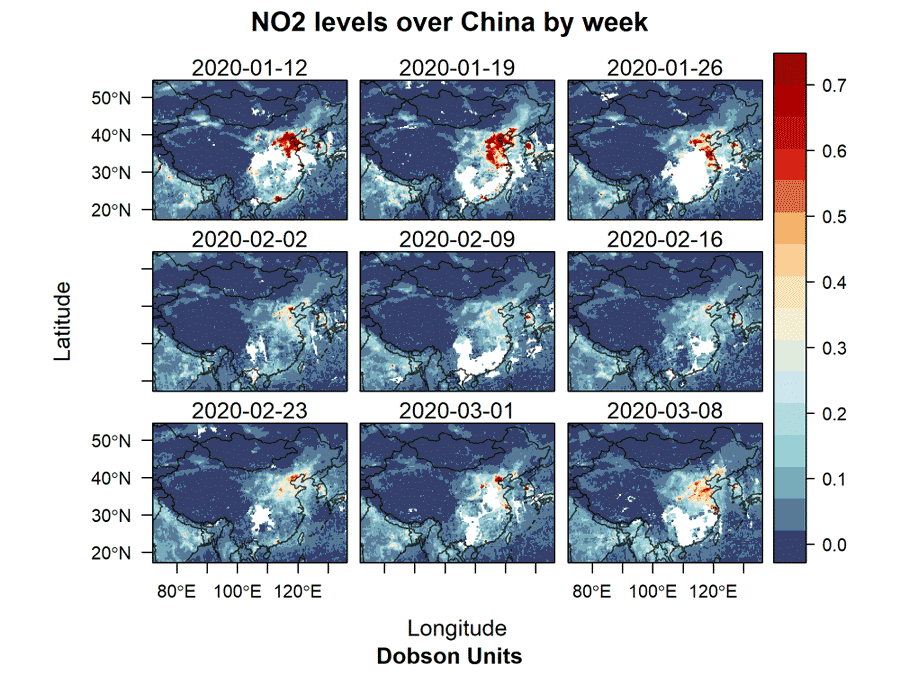 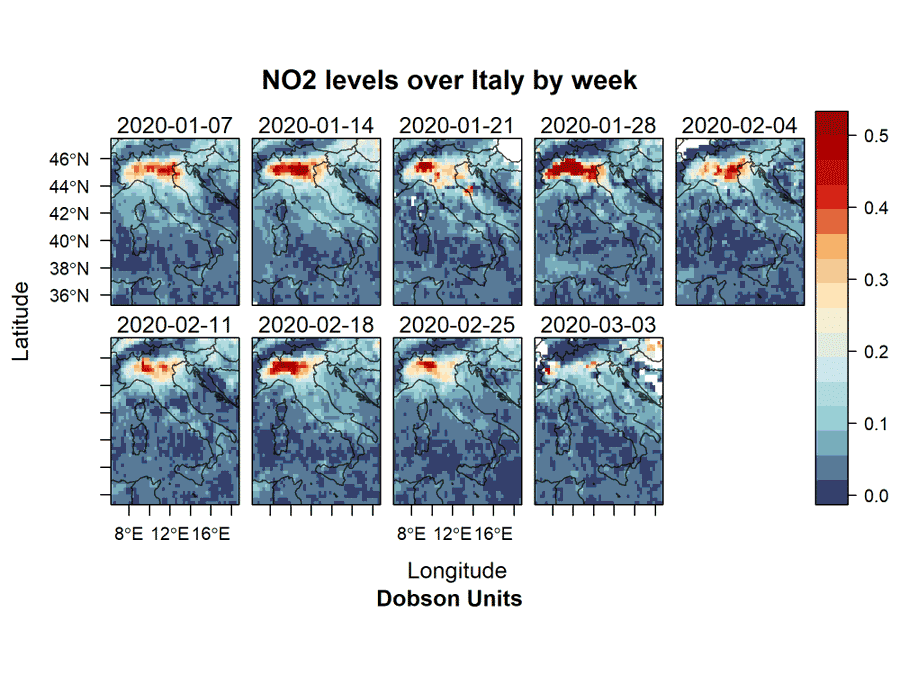 In the four weeks after the Chinese New Year holiday, PM2.5 levels were down ~25% nationwide and NO2 levels by 40% on year, showing the dramatic reductions in oil and coal burning, with steepest falls in the central region. pic.twitter.com/2OcYp7YMCj

Which is to say that even this silver lining has its negatives as the abatement in pollution is likely very temporary but it’s still striking to see how seemingly intractable problems like pollution really are within our power to address if our response is comprehensive enough, and if we can find a way to do so outside of an immediate crisis.

While the current reduction in pollution is likely temporary at the moment it remains unclear when people will be able to return to their normal lives and jobs around the world so enjoy the slightly fresher air while we have it.

These reductions in pollution just over one month could mean tens of thousands of deaths avoided from air pollution. Excellent post from a Stanford professor:https://t.co/tKmt5YVSeM

That is NOT to say that the pandemic is some kind of a blessing in disguise, with all the suffering it has imposed on people. At the most, it shows it’s easy to overlook chronic, long term health threats such as air pollution, and thus, harder to muster an adequate resposse.