Lizzo has lately been the inspiration we all need. Her album “Because I Love You” is chock full of dance hits that are all about celebrating and accepting yourself. She also plays the flute like no one’s business. Everything about her is a delight to the senses. So, of course, she messed up on Twitter. That’s the rise and fall of celebrity—you are absolutely beloved until you do something stupid in public.

The offense was screenshot by Someecards, who politely covered the face of a woman named Tiffany. That woman was exposed by Lizzo, who wrote on her very popular Twitter account that Tiffany stole her food in a Postmates order, saying it’s “lucky” she doesn’t fight anymore. 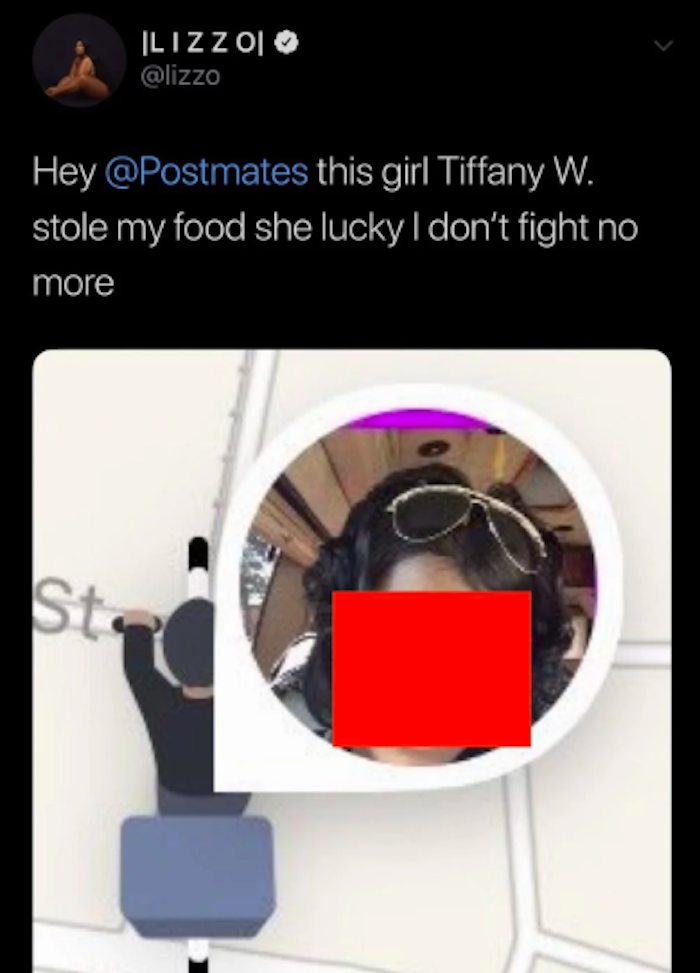 Lizzo eventually deleted her original tweet, but she did also DM with Postmates about the situation, who probably reimbursed her. It’s not clear what happened to Tiffany.

People are not happy with Lizzo using her huge following to attack a service worker, especially when she could literally order a whole restaurant to her house if she wanted to:

So why didn’t you do this beforehand instead of exposing her face to your followers. You do know that the app has a reporting function right?

Jesus. This poor girl is going to get fired and then hunted down. Come on, Lizzo.

I do Postmates and there have been times where the app has fucked up or weird circumstances have happened and I couldn’t get the food to the customer. U don’t know what this woman’s situation is. You can afford to order more food. She might not be able to afford losing her job.

Publicly shaming someone in the service industry (esp. when you’re wealthy) is worse than stealing food.

lizzo doxxing a low paid service worker is something we do not love to see, sorry

It sucks when the person you stan does something so careless and, let’s face it, petty. Pretty sure Postmates would respond to a Twitter DM from Lizzo’s verified account without her kicking up a public fuss about it.

And, as many people have pointed out, mistakes happened. Maybe Tiffany’s app glitched or she was taken hostage during her delivery route. We just don’t know! If she did steal the food, I’m sure she’d regret her chance to have met Lizzo. That’s punishment enough without public persecution.

A gracious apology that actually acknowledges her mistake! That’s nice. Her fandom is strong, so she probably could have gotten away with never apologizing, as seems to be the usual response from celebs these days. It would really sweeten things if she sent Tiffany a gift certificate for a spa day or something. Or for Postmates, if she wants to stay petty.