If you are thinking about doing a childish prank with your pals, please check now that there is no audio of the group making that decision together. When your stupid joke is inevitably revealed, that audio will be released, and you will sound absolutely ridiculous. If you don’t believe me, let me introduce you to the story of the U.S. Navy sky dong.

In 2017, some pilots for the Navy were flying above Seattle when they chose to use government resources to draw a giant dong in the sky. 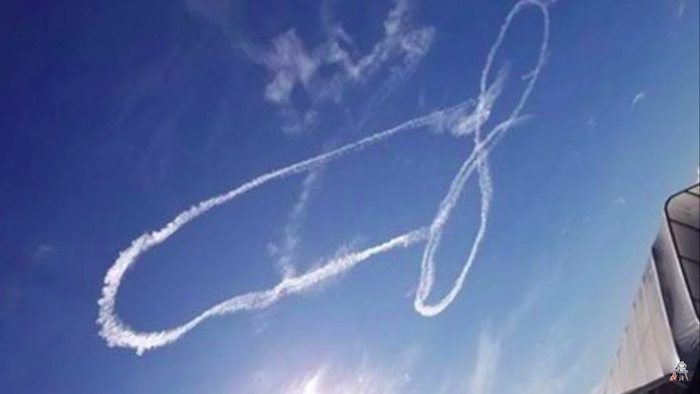 Honestly, it’s a pretty stupid goof and I think it’s funny. But it makes sense that a lot of people disagreed with that assessment, including their supervisors.

The pilots were subjected to an investigation, and the audio from that fateful day has just been released after close scrutiny. You can listen to the minute and half of auditory glee here:

Twitter user Brian Floyd posted the clip as well, highlighting some of the best quotes from the artist and his co-conspirators, who are all pretty obsessed with their project:

This includes quotes such as:

"Balls are gonna be a little lopsided"
"Balls are complete"
"That's gonna be a wide shaft"
"The head of that penis is gonna be THICK"
"This is, like, the biggest penis I have ever seen"
"That's a great penis right there. Make the Navy proud"

The Navy Times news report on the matter detailed the investigations after the pilot touched down. Almost immediately after completing the shaft, he was filled with regret:

“‘Soon after, I realized the extent of our actions,’ the pilot wrote. ‘That the contrails were remaining longer than predicted.’

‘I remarked that we needed to take steps to try to obfuscate it,’ he wrote. ‘I flew one pass over it essentially trying to scribble it out with my contrails. That pass was ineffective.’

With fuel running low, the jet returned to Whidbey Island.”

The lieutenants involved almost immediately confessed when questioned by their commanding officer upon their return to their base, because you obviously can’t deny scrawling a giant sky dong. The men involved had no other flaws on their record, so leniency was recommended. There were still some harsh words added to their file.

“While the skywriting conducted by (the lieutenants) was crude, immature, and unprofessional, it was not premeditated or planned and not in keeping with their character demonstrated prior to the incident,” the investigator wrote. “Even so, it has caused the United States Navy severe embarrassment in the public arena and jeopardizes the strategic narrative that underpins the justification of the flight hour program.”

So true! At least one angry mother wrote in to ask why she had to explain to her kids why there was a c*ck in the clouds. That’s not a conversation she should have had to have.

Someone, please, think of the children!