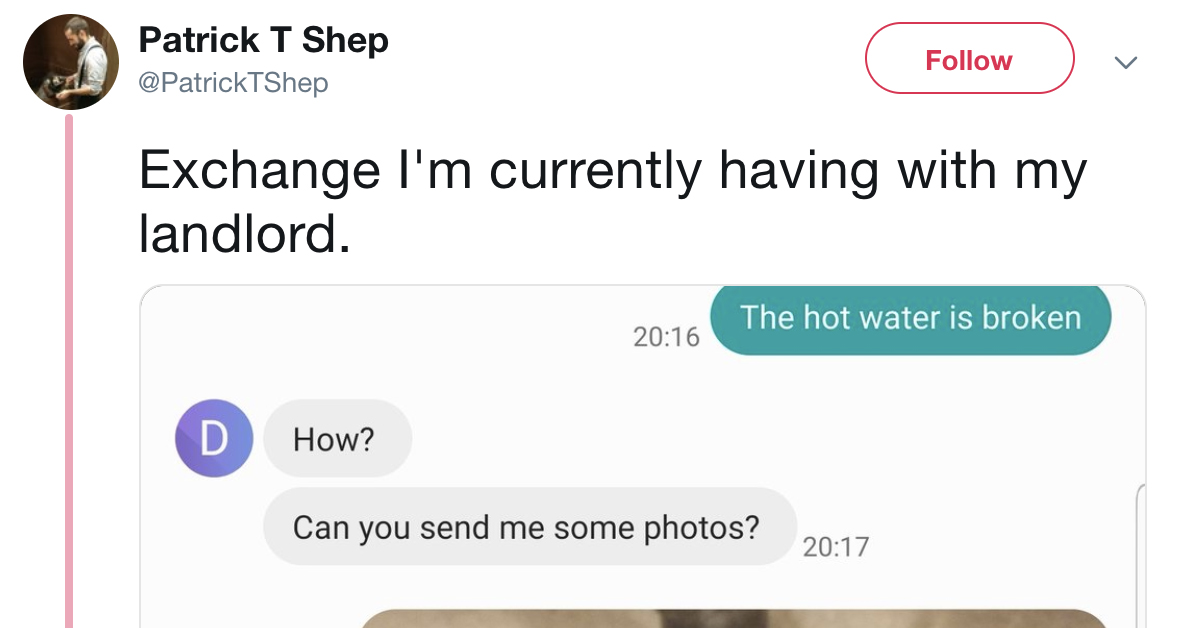 Very few people manage to have a happy, harmonious relationship with their landlord, because our desires are diametrically opposed. Tenants want their rent to remain reasonable and for their house to stay in working order. Landlords want to make as much money as they can and do nothing. It causes some friction.

I’ve never been a landlord, so maybe I don’t understand the daily stresses of the job, but this text exchange from Twitter user Patrick Shep seems like an encapsulation of how landlords react when you ask them to fix something. Shep shared a screenshot of his texts with his landlord, captioning it, “Exchange I’m currently having with my landlord.”

In the text, Shep writes, “The hot water is broken,” to which his landlord responds, “How? can you send me some photos?” Um, okay.

Exchange I’m currently having with my landlord. pic.twitter.com/PPd2k3lgbF

Shep sent him a picture of the faucet running, writing, “It looks like this but it’s not hot.” Smart ass.

The tweet went super viral, because it’s what we call “relatable content.” It seems everyone has been faced with stupid message from their landlords after asking for a basic service. The stories came flooding in:

What exactly are they paid for tell me pic.twitter.com/XmhgHyUqgc

Glad it’s fixed. We got asked to provide photo proof when the electrician rewiring our house failed to install an extra power point as requested

Mine didn’t know we had a porch pic.twitter.com/qzwFpYEnEK

And we eventually got an update on how the faucet looked after it was fixed. The same, but cold:

Update: it got fixed.

Hey, at least it got fixed. That’s better than 95% of landlord interactions.