As fears over the COVID-19 pandemic rise, so does the need to acquire toilet paper. Folks having been going absolute batsh—t in the aisles of grocery stores for over a week now, fighting and screaming and stampeding. They’ve been taking more than they need of everything, leaving nothing for the elderly, infirm, or those on a budget that doesn’t allow for buying a month’s supply of food at once.

Meanwhile, grocery store workers are stressed and vulnerable. Being in contact with the public puts them at a higher risk of becoming sick, but they’re still doing it. They need jobs and we need grocery stores. Are they being treated with the respect they deserve under these circumstances? Absolutely not.

A man named Allen Breathet in the U.K. posted about how his wife came home from her job at Tescos weeping and got super angry about it on Facebook. He wants us all to share the following message:

TO YOU SELFISH, HORRIBLE CUSTOMERS that have been in Tescos today I hope your f#@cking proud of yourselfs. My wife has just come home from work and in tears telling me that today has been the worst day ever!!!! She’s had to endure being shouted at, called names and treated with no respect being told that this is her fault! that the queues are massive! and why are the queues taking so long to go down?, why is there no toilet roll?, rice?, pasta and hand clenser? etc.!!!!!!!. Just to put you straight you assholes. It’s not my wife’s fault! And Its not the normal customers fault. 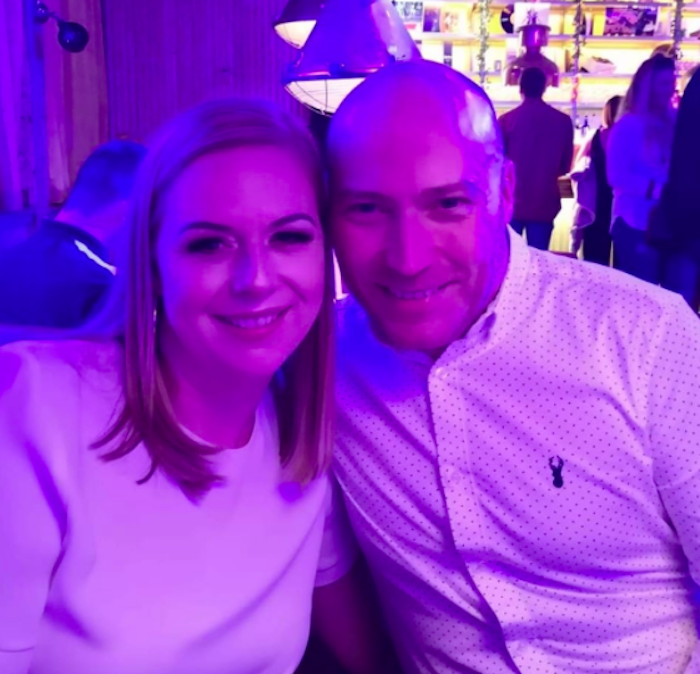 So whose fault is it?

that have come into the store in there thousands today and all week panic buying, being selfish and not giving a care in world about the other vunrable people in your community that actually need the items and food more than you………so to anyone that’s going into any Tesco store or big retailers just remember that the people that are serving you are just trying their best!

And just remember that just like my WIFE and the rest of her colleagues. They have more likely a higher chance of catching this corona virus more than you, as they got to deal with the thousands of customers that walk through the doors. We got kids at home! We have grand parents over 65 at home, so what the chances of her getting it and passing it on to the rest of the family.??????????. YOU SHOULD BE THANKING THE STAFF IN THE SHOPS FOR BEING THERE AND TREATING THEM WITH SOME UNDERSTANDING AND MOST OF ALL RESPECT. !!!!!!!!!!!!!!!

He finished with “PLEASE SHARE” and people did. It’s been shared on Facebook over 140 thousand times and has over 40 thousand comments. While Breathet’s story about his wife might make you feel like humanity is garbage, at least some of the comments will restore them. There are some people out there thinking straight: 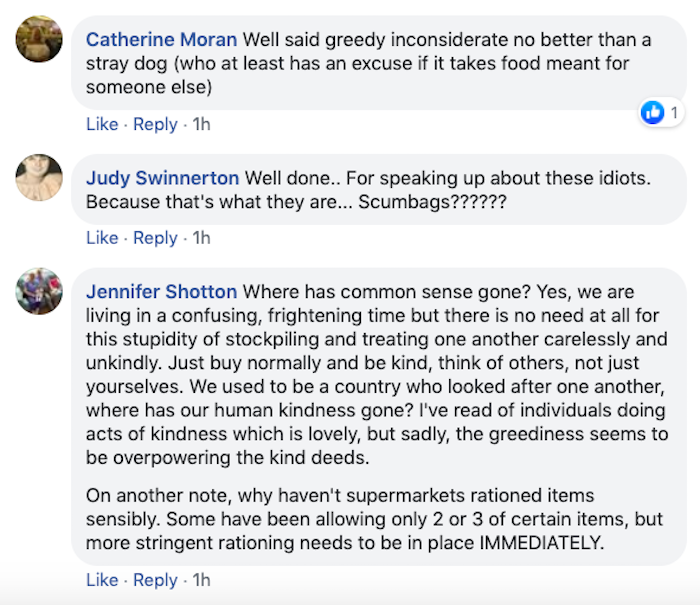 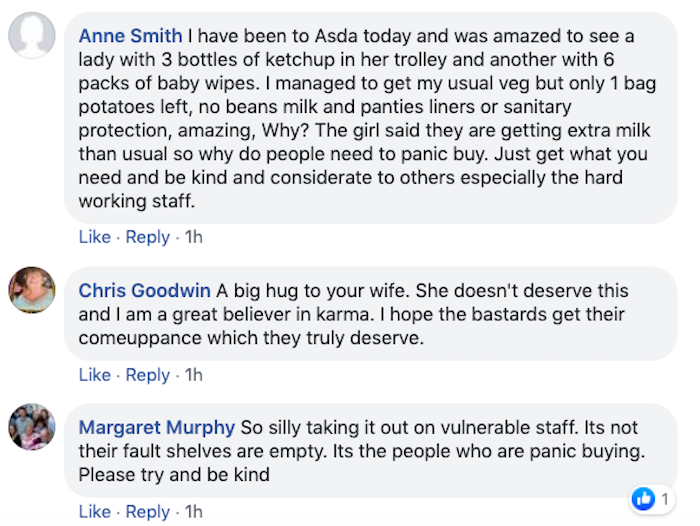 Don’t hoard. Don’t lash out at other people. We are all in this together. And you don’t want to get on the bad side of the people with food.