While things might be booming on OnlyFans, it should be noted that a lot of sex workers have been hit hard by quarantine as you might imagine. Already having one people know about has given some people a leg up.

A woman named Sarvani appears to be one of those people. She posted a picture of herself on Twitter standing in front of her house, over which she wrote, “Say watcha want about OnlyFans but I just moved into my dream house at 22.” 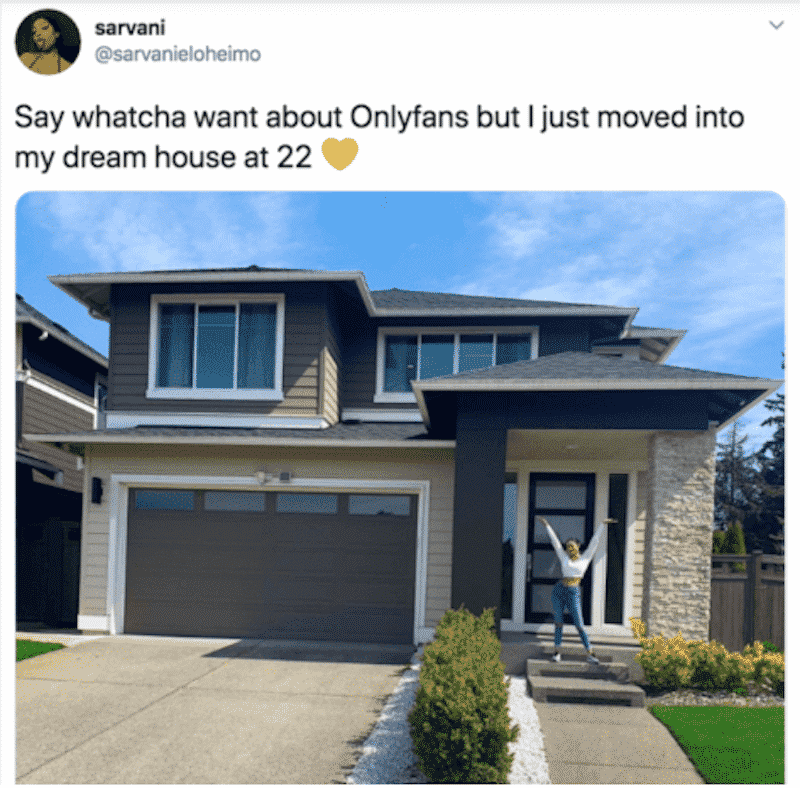 For some reason, this has struck everyone as hilarious. Maybe it’s because she said “dream house” instead of “first house,” because if this is her dream house…she should dream bigger. It looks nice, but is a perfectly ordinary starter home. I am impressed that she has managed to buy it at 22, and I also think that if she were an accountant no one would be saying anything about this post at all except, “Congratulations!”

In response to Sarvani’s brag, people have been mockingly sharing their own “dream homes” and attributing them to their OnlyFans careers. They’re tweeting pictures of mansions, cartoons, any place but where they actually live:

say what you want about onlyfans but i’ve just moved into my dream home at 20 😍 pic.twitter.com/RFDQmW3wbe

Say what you want about Only Fans but I just moved into my dream house at the age of 20 pic.twitter.com/5c3KL1KQSf

Say what you want about OnlyFans, but I moved into my dream house at 27 pic.twitter.com/uav6RUoGu7

And you know why? Because their asses aren’t sexy enough to buy them a real house! Unlike Sarvani, who has an ass so sexy she has a mortgage at 22. And now she’s locked her tweets. Jealousy is ugly, folks.