We’re living in a weird time when brands have entire personalities on Twitter, and those personalities are mostly rude. While some hapless social media managers ends up getting dragged for their attempts to sound like Kids Today, Wendy’s is grandfathered in to being a Twitter account with attitude. It was one of the first fast-food joints to get really sassy online, and people love them for it. But Wendy’s is no longer holding back. She no longer shoots to stun, she shoots to kill.

The latest, harshest example comes from this news story posted by @ComicBookNOW about how Burger King is testing a sandwich with a french fry filling. This also seems like a ploy to generate Twitter attention. Who doesn’t have an opinion on something that absurd? I know I do: sounds too starchy.

BURGER KING is testing a sandwich with nothing but french fries:https://t.co/cMELl6fZaV pic.twitter.com/D1taIscJk2

According to the story, this new dish isn’t coming out of nowhere. In the U.K., this is a common drunk meal traditionally called a Chip Butty. How whimsical. The English know how to name things. They’re currently only available in New Zealand, to make things more confusing, and the whole sandwich is held together with mayo and ketchup.

Once Wendy’s heard about this, they decided to go for Burger King’s throat. Quote-tweeting the original post, the savage account wrote, “When literally anything would be better on a bun than their beef.” 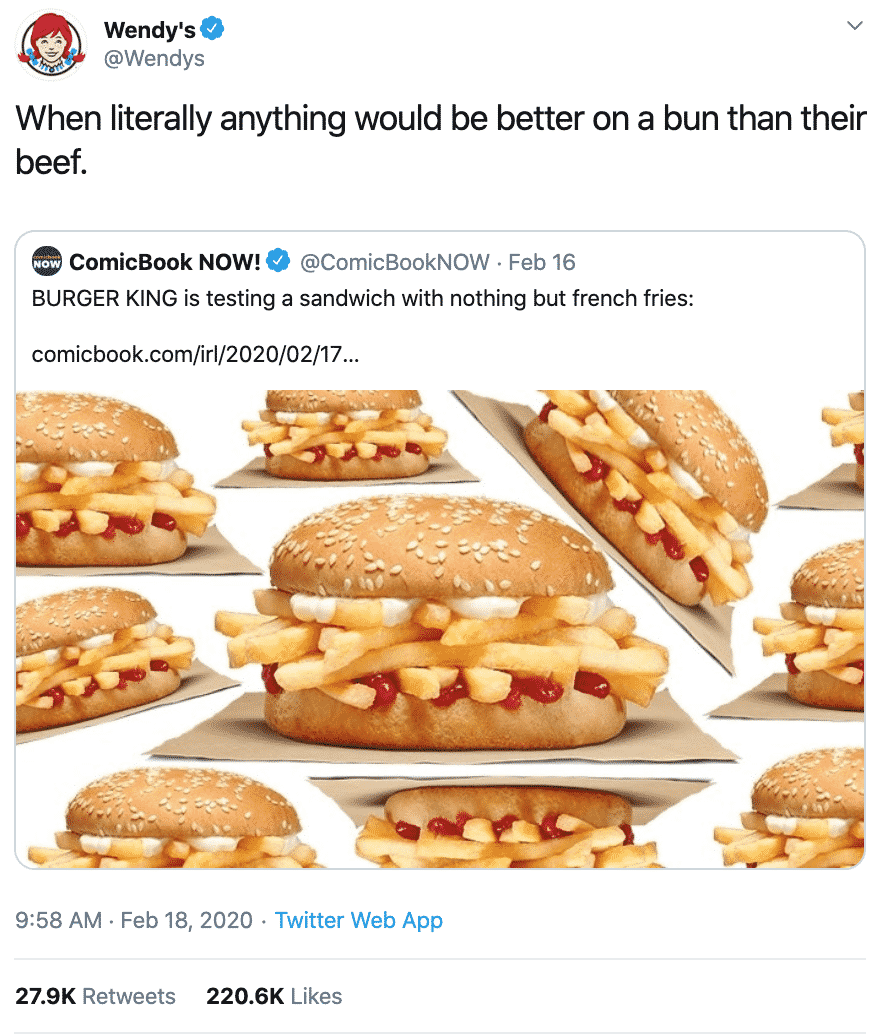 Wow. Wendy is a mean girl now. She put Burger King in her Burn Book, then handed it in to the principal.

When literally anything would be better on a bun than their beef. https://t.co/YfTTrYrPDI

their whole restaurant is

Maybe it tastes like the paper? Literally no idea tbh

They encouraged others to join in the roast:

And tormented some of their own followers:

prove it. no bamboozle.

Went for McDonald’s too:

We have beef. No idea what they have.

Came back around to Burger King:

they should try the ever present idea – make it good

And ended up in the sh*t:

this one has music

I’m sorry to have to say this, but the Wendy’s Twitter account is a rabid dog that needs to be put down. Whatever happened to civility in burger chains?