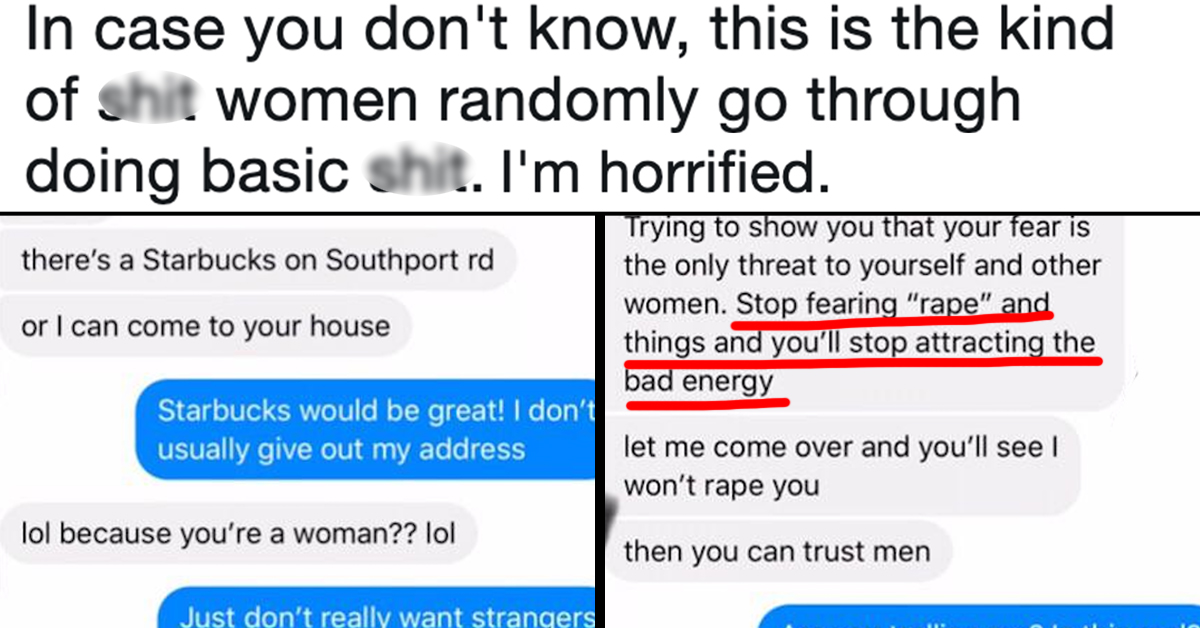 Though strides have been made for both women and feminism, it seems like there’s a dedicated corner of the Internet that is still used to argue about whether or not women’s experiences are real.

Evidence is offered, the evidence is contested, women give examples, men shout, “Not all men!” It’s a frustrating place to visit as a woman or as a thinking person.

It can also be pretty scary when you’re the person offering evidence.

Twitter user @Swordsfall1 shared screenshots of a conversation a woman had with a guy to whom she was trying to sell her iPhone, captioning it:

“Guys. In case you don’t know, this is the kind of sh*t women randomly go through doing basic shit. I’m horrified.”

It starts out with the woman making arrangements with the guy for him to get the phone. He suggests a Starbucks or offers to come to her place. That’s pretty reasonable! But when she agrees to Starbucks, saying she doesn’t usually give out her address, he decides to take that very personally.

In fact, he escalates the comment, insisting that feminism has made her afraid of men, that women have nothing to fear, that they lie about rape, and that she should give him her address so he can come over and show her he won’t rape her at all! Very normal and reassuring stuff. Nothing to see here.

It’s hard to imagine that anyone who would write or say those things has good intentions, but they certainly seem to think they do! That’s the logic of a Nice Guy: do exactly what I say and I’ll be sweet, otherwise I’ll threaten your safety. M’lady.

The texts don’t belong to @Swordsfall1, who didn’t credit where they found them, it seems. But lots of women reading the texts found them extremely relatable.

The irony is that language does not mark him as a nice guy….

The cock comment *eyeroll* this is so much what experience when we try to protect ourselves. In fairness there are good men out there, they are the ones who go cool, fair play Starbucks it is.

“Gumdrop” is the part he didn’t mean to send.

This reads almost the exact same as a conversation I had with a guy several years ago, who actually knew the apartment complex I lived in because he was a delivery guy & recognized my car. It was terrifying trying to end that convo. I remember having a panic attack in my bath tub

It's pretty much an auto-warning sign at this point. When a guy says that phrase, they usually mean "I have a lot of horrendous flaws, but if you ignore all of them I think you'll find that I'm otherwise a nice guy and therefore I am entitled to possess you, female."

The irony is that language does not mark him as a nice guy….

The cock comment *eyeroll* this is so much what experience when we try to protect ourselves. In fairness there are good men out there, they are the ones who go cool, fair play Starbucks it is.

People who harass women in this way probably already know how messed up it is. Seeing their own texts go viral on Twitter might not do much, but maybe it will convince a few people who are still somehow unconvinced that this stuff happens. Then we can use the “Not all men” corner of the Internet for something more useful, like pictures of kittens in hats.