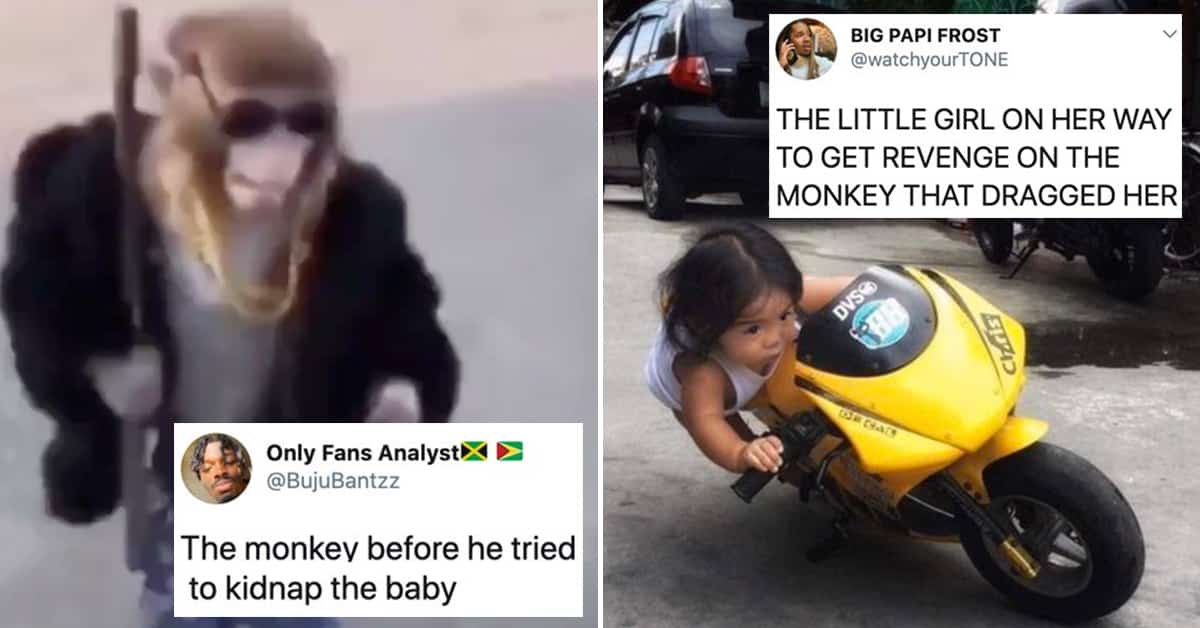 A video taken a week or so ago in East Java, Indonesia, has made its way to the U.S. to absolutely blow everyone’s minds. While people in Indonesia likely understand what’s happening (more or less) in context, for people unfamiliar with a traditional topeng monyet performance (a form of street entertainment that literally translates to “masked monkey”), it’s blowing mental fuses. The Indonesia Expat reports that topeng monyet is banned, but obviously still happens—though maybe not so much after this.

In the video, a monkey rides up to a family on a tiny motorcycle. It leaps off, grabs a toddler, and drags her halfway down the street before letting go and scampering off. The toddler is clearly upset, but they get up and wander back to the rest of their family. I had to watch it a few times to process what I was seeing:

Can’t remember the last time I saw a monkey ride-up on a motorcycle and try to steal a toddler. It’s been ages…pic.twitter.com/PBRntxBnxw

This is apparently not what is “supposed” to happen and the monkey was punished for attacking a child by its handler. That seems unfair, because if I were a monkey forced to learn to ride a motorcycle, I would attack as many humans as possible. Then I’d take the tiny motorcycle and ride into the sunset. Unfortunately, he’s on a leash.

Despite the dark and sinister undertones of this video, lots of people were amused by the surreal display. It really is such a weird sequence of events. It quickly became the “Motorcycle Monkey” meme, and popped up all over Twitter in different contexts:

thinking about him (motorcycle monkey)

How that monkey pulled up to drag that baby pic.twitter.com/NoR3ZNLFsL

my nightmare from last night… in video form https://t.co/3VIiaxUyt3

And that, everyone, is how we got COVID-19. https://t.co/yUeqfVXdIt

Wondering how the 2020 Apocalypse was going?
We’re now at the PLANET OF THE APES stage.
Sleep tight. https://t.co/wj810RTXdu

-Did you perhaps have a childhood trauma?

-Well a monkey on a motorcycle tried to kidnap me when I was a toddler.

-Look, if you’re not going to take these sessions seriously I don’t think we should continue having them.

niggas done made a fan art for that monkey LMFAOOOO pic.twitter.com/p436NvmXSF

The monkey before he tried to kidnap the baby pic.twitter.com/t4RMKmCYBr

The monkey on its way to drag the child off that bench pic.twitter.com/XtWmu7PpeA

Some people built out the world, imagining the toddler getting their revenge or inventing a whole world of monkeys attacking children because they deserve it:

THE LITTLE GIRL ON HER WAY TO GET REVENGE ON THE MONKEY THAT DRAGGED HER pic.twitter.com/m8cY0qPuZr

This little monkey on the “fuck them kids” agendapic.twitter.com/rHRDEkV7HC

May these memes lead to freedom for all monkeys.