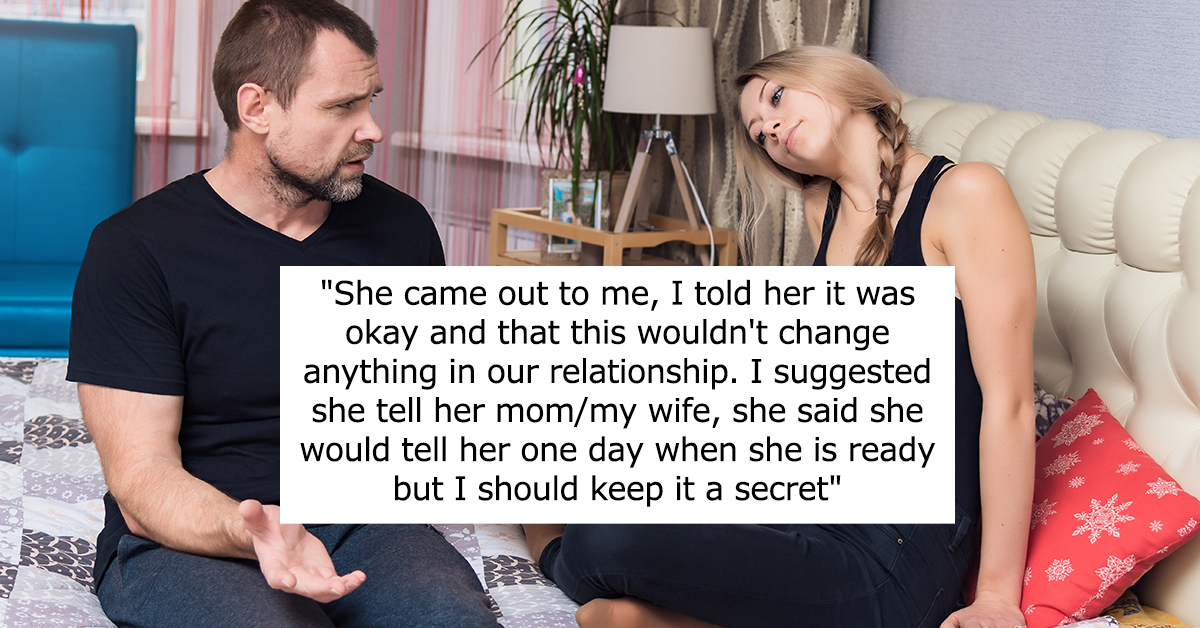 Keeping secrets from family can be nearly impossible. But what if you thought you were doing the right thing and sheltering your child? That’s the question a Redditor has regarding his secret-keeping. Was he really protecting his daughter by keeping her sexual identity a secret? Or did he violate his relationship with his wife by not telling her their daughter is a lesbian for years?

The OP discovered his daughter kissing another girl when she was 15 and asked her about it the next day.

“My daughter (24F) is a lesbian, I found out by accident when she was 15 and I saw her in her room kissing a female friend she didn’t realize that I saw them so I just moved away slowly and quietly. I told her the next day what I saw and she came out to me, I told her it was okay and that this wouldn’t change anything in our relationship, I suggested she tell her mom/my wife, she said she would tell her one day when she is ready but I should keep it a secret.”

She came out to him and he reassured her that it “wouldn’t change anything in our relationship.” However, the daughter said to keep it a secret, that she “would one day tell [her mother] when she is ready.”

“I asked her why she didn’t want to tell her she said, her mom has a big mouth and she didn’t want other people to know especially her grandparents (my wife’s parents are homophobic) so I just let it be and kept the secret as it wasn’t my secret to tell” the OP wrote.

When the OP’s daughter brought her long-term girlfriend (now fiancée) home to introduce her to her mother, a problem arose:

“My wife got angry and asked our daughter why she kept this secret from her parents? My daughter responded by saying I knew and I was the one supporting.”

“My wife then asked me how long I’ve known about this and I told her truth about everything. Well I’m now being called a liar (which is true and I understand that I lied all this time but it wasn’t my secret to tell), she has accused me of living a double life and sneaking out at night to have dinner with my daughter’s secret lovers (also true but my daughter asked me to meet her GF and the asked me to meet her parents, I even play golf with my daughter’s fiancee’s father).”

Then things got more fraught. The OP’s wife called her family and friends and told them the truth, and now the OP is being called a “horrible, lying husband.”

Does he deserve that title? Or was he right to keep his daughter’s secret until she was ready?

“Sounds like your daughter was right to hold off telling her mom. Your wife is making your daughter coming out about herself, instead of supporting her daughter. That’s despicable,” said opossum_bastard.

“I think it’s important for parents to realize they’re not entitled to their kids deep thoughts and secrets… that information has to be earned. If a parent hasn’t built a rapport of trust then later finds out their child was hiding something from them, they better take a long hard look in the mirror instead of immediately blaming everyone around them. The mom’s reaction only reinforced that she couldn’t be trusted. The mom really missed a golden opportunity to show them she can respect boundaries,” said jksask.

“One of the key parts of being in the LGBTQ+ community is learning and teaching others that you have no right to out anyone else. There is no physical, mental, emotional, or telepathic way to know how anyone else is living or interacting with everyone else in their life. To out them to anyone before they’ve given the go ahead to do so, it to forever break their trust. OP, you did exactly what your daughter asked of you. To let her come out to her mother without you pushing it, or outing her yourself. Yeah, your wife is pissed off, but that’s the way this system functions. Your daughter assumed, correctly I might add, that your wife/her mother would not hold herself back from outing her to everyone else. So your daughter had to make the decision that when she told her mother that she was in a good enough physical/mental position to be fine with the rest of the family being told at roughly the same time. If that moment was when she was engaged and no longer living with her mother- then that was the moment it was going to happen,” explained neverliveindoubt.

“It’s your daughter’s decision when she tells people. The golden rule is to NEVER out anyone. You did the right thing, your wife is probably just annoyed she wasn’t trusted,” TheMagusFowles said.

“You mostly did the right thing, it would have been a really AH move to out your daughter before she was ready, and tbh your wife’s reaction pretty much proves your daughter was right about her reasons for not telling her mother. However, I do think it’s like pretty reasonable to be pissed that your spouse was meeting with your daughter’s fiance and future in-laws when you didn’t even know she was dating someone. That…is a lot of lying,” observed alluce1414.

What do you think? Is the OP a good father, a lying husband, or both?