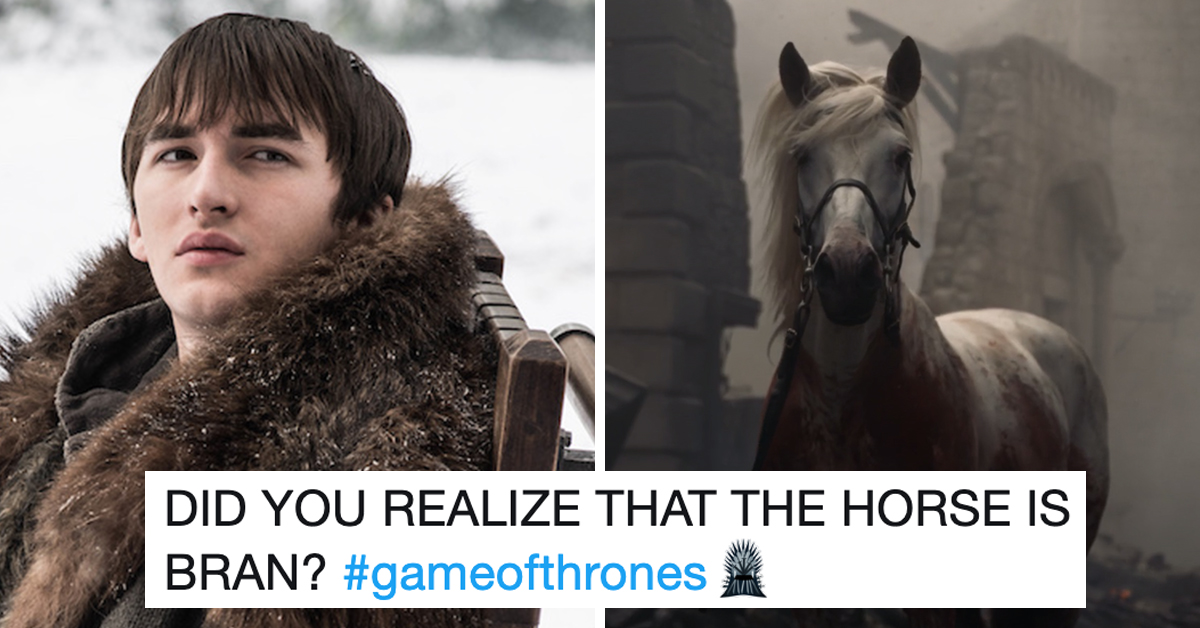 In the final moments of Season 8, Episode 5 of Game of Thrones, Arya Stark is seen stumbling (miraculously) out of the carnage that is King’s Landing, only to see a white horse standing calmly nearby.

Where did this horse come from? What does it symbolize? And how did it manage to survive Drogon’s relentless fire-breath?

According to the most popular fan theory currently circulating the web, it all starts and ends with Bran Stark. In other words: Bran Stark wargs into a white horse in order to save Arya.

That horse was Bran. #GameofThrones

What are the odds Bran Stark warged into the horse to get Arya the f**k out of there #GameofThrones pic.twitter.com/bJLMPFqXw8

they only way I care abut this horse is if Bran just warg-ed it to her. #GameofThrones #gameofsnark

DID YOU REALIZE THAT THE HORSE IS BRAN? #gameofthrones pic.twitter.com/EQVkolLXJ4

Do y'all think that maybe bran sent this horse for Arya? #GameOfThrones pic.twitter.com/9KFCY7LiGP

Of course, there’s probably zero chance that Bran warged into the white horse, and not just because he’s a slacker. First of all—and this here’s a pretty compelling piece of evidence—the white horse appears earlier in Episode 5.

It’s the same one ridden by the former Golden Company leader Harry Strickland. The nose markings (and luscious locks) check out.

UPROXX also points out that “co-showrunners David Benioff and D.B. Weiss have been increasingly less interested in the more ‘magical’ elements of the Thrones universe, especially now that the Night King has been defeated.” They’re tired of the magic, which is probably why they killed off one of Dany’s dragons (just kidding, they did that to cut down on their CGI budget. Just kidding again!)

A little more on-the-nose is the parallel to death and the Four Horsemen of the Apocalypse: “And I looked, and behold a pale horse: and his name that sat on it was Death,” reads the passage in the Book of Revelation.

The reference would make sense with Arya’s narrative arc and transition from a young girl into a trained assassin. It could foreshadow her full transformation into and embodiment of Death, as she must now save the realm and go toe-to-toe with the now Mad Queen Daenerys.

Others think that the white horse means Arya is actually…dead.

The white horse has been known in mythology as a symbol of death. I'm calling it, Arya is dead. #GameofThrones @GameOfThrones pic.twitter.com/RdWP5sLyo4

On god if arya is dead.. pic.twitter.com/w8IhVgq5dC

Or that the little girl holding the white toy horse is somehow involved.

The little girl #Arya tried to save was holding a white horse#GameofThrones pic.twitter.com/rW7mPdFrqe

…or that Ned Stark is somehow involved.

I AM CONVINCED THAT WHITE HORSE WAS A GIFT FROM NED STARK. #GameofThrones pic.twitter.com/PdTv92TXrc

…or that the Lord Of Light is somehow involved.

So the lord of light sent her a white horse

Anyway, the white horse is certainly not Bran, and it probably isn’t the Lord of Light either.