Chrissy Teigen is never one to mince words. If she thinks it, she says it, and that’s definitely part of why so many people love her (and hate her). Sometimes, you just find yourself reading Chrissy’s Twitter for fun. It’s a like car crash—you can’t look away! Whether she’s insulting the president or talking candidly about motherhood, some of her ideas are bound to resonate with you.

But this time, we wonder: Is Chrissy Teigen taking it too far by saying we all secretly hate girl scout cookies? What a proclamation, Chrissy. How dare you insult an institution of deliciousness!

I did the ranking you’re all too scared to do. @cravings pic.twitter.com/vl07dUtaAd

In the tweet, you see Chrissy’s very informal cookie-ranking chart. It’s got a happy, neutral, and sad face. Under the sad face, literally every Girl Scout cookie.

She writes, “I did the ranking you’re all too scared to do.” Damn, Chrissy. Savage.

Then she did an alternative ranking “if no other cookies existed” and put two of the Girl Scout cookies into the neutral category. Damn. 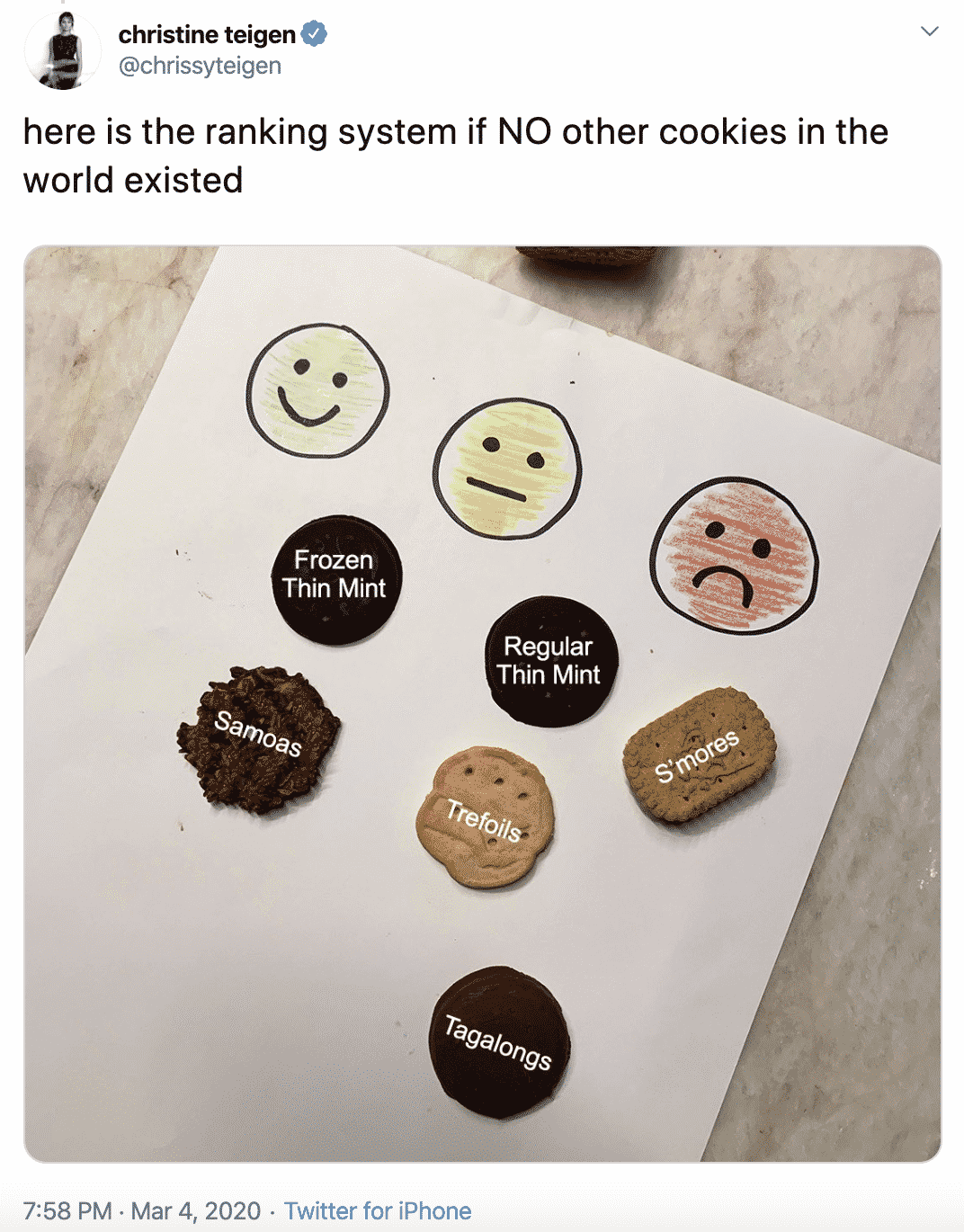 Kindly, Chrissy will still support the Girl Scouts…even if she’ll throw the cookies in the garbage:

happy to support. HAPPY. but I’m not doing it for the cookie okay

The thing is, Girl Scouts are quite a force. Each year, they launch into their cookie sale, begging for money from schools, offices, and families worldwide. And everyone has at least one favorite cookie (* cough cough* Samoa *cough cough*)—but maybe Chrissy is on to something?

Here’s what the internet had to say. The feelings were mixed:

Wait is this why you were so eager to give the s’mores cookies away?

Frozen Thin Mint needs to move one space to the left. 😊

Tagalongs have been mis-judged. They too belong in the smiley column

In the trash where they belong

Me trying to figure your system pic.twitter.com/gUpQo8CshA

Your tagalong ranking has seriously but a damper on our relationship. I’m going to need some time and space to think this all through.

In the end, the internet is DIVIDED over this explosive claim. What do you think?