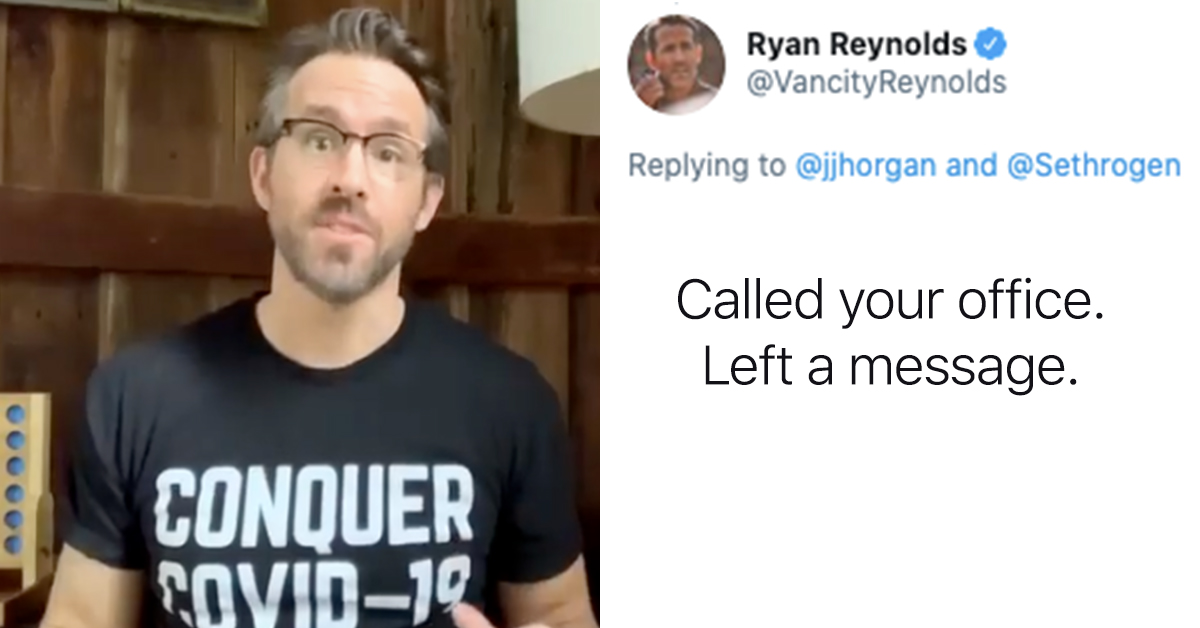 Celebrities shouldn’t be the people we look to in a crisis, but the reality is that many people do check to see what their heroes say and do as an influence on their own behavior. Celebrities are famous in part because they’re cool, and they have a say in the dialogue, trends, and fashion of our times. Now, some of them are being asked to step up and be really super explicit about where they fall on the whole “should we risk coronavirus for a BBQ” thing.

B.C. Premier John Horgan gave a speech in which he asked Ryan Reynolds and Seth Rogen, two Canadian icons, to come forward and say something helpful about how to stop the spread of COVID-19. He shared a clip of his press conference on the matter, captioning it, “We need young people to understand that now is not the time to go to large parties. @VancityReynolds & @Sethrogen – please help spread the message to stop the spread of #COVID19.”

We need young people to understand that now is not the time to go to large parties. @VancityReynolds & @Sethrogen – please help spread the message to stop the spread of #COVID19. pic.twitter.com/u9SodpRnxu

And Ryan Reynolds did. He shared his PSA with Horgan and with all of us, reminding us of his enemy Hugh Jackman and his beloved mother.

“I don’t think they want medical advice from guys like me, no sir. Unless it’s plastic surgery, which — a lot of people don’t know this — but I used to be Hugh Jackman,” he begins. “Young folks in B.C., they’re partying, which is of course dangerous. They probably don’t know that thousands of young people aren’t just getting sick from coronavirus, they’re also dying from it, too.

“It’s terrible that [COVID-19] affects our most vulnerable. B.C., that’s home to some of the coolest older people on Earth,” he said, referring to his mom.

“My mom, she doesn’t want to be cooped up in her apartment all day. She wants to be out there cruising Kitsilano Beach, looking for some young thirtysomething Abercrombie burnout to go full Mrs. Robinson on. She is insatiable.”

“I hope young people in B.C. don’t kill my mom, frankly. Or David Suzuki. Let’s not kill anyone. I think that’s reasonable. I love parties. My favorite thing to do is sit alone in my room with a glass of gin and the first 32 seasons of Gossip Girl. That’s a party.”

It sure is. And has Seth Rogen responded? Well, we’ll see what they’re cooking up:

Just slid in to your DMs!

But he did have advice on smoking weed and staying home:

I’m happy people are taking this advice, but while you’re at it, don’t put in the filter till AFTER you’ve rolled your joint. It helps pack it in! https://t.co/rfxdYG29RX

That sounds like it would appeal to young people to me.