In the last few weeks, the entertainment industry has been reckoning with the TV habit of using blackface for comedic effect, because blackface isn’t funny. It’s just racist. It’s been a thing that many Black people have said is racist for a long, long, long time, and yet it keeps happening. It’s almost like the white people in charge weren’t paying attention!

But after a few months of daily protests around the country over racist police violence, as well as many difficult conversations about racism in every industry, some networks and showrunners are responding by pulling episodes of TV with blackface in them. Yes, multiple episodes.

This week, it’s an episode of Golden Girls, Deadline reports. The episode aired in 1988 in the show’s third season and centers around the marriage engagement Dorothy’s son Michael has with a Black woman who is older than him named Lorraine. Dorothy supposedly disapproves because of the age gap, and Lorraine’s family disapproves because they don’t want to see her in an interracial relationship.

When her family shows up, Blanche and Rose step out to greet them and happen to be wearing mud masks, which look like blackface. 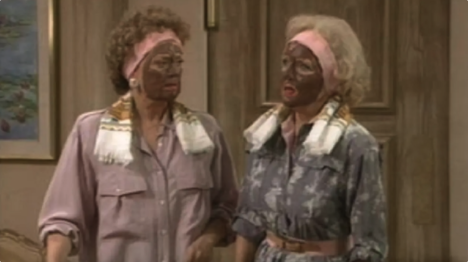 “This is mud on our faces, we’re not really Black,” Rose tells them.

It’s my birthday and all I ask for is that you hysterical lunatics don’t cancel The Golden Girls. pic.twitter.com/32snYpfTkU

Is this a joke about blackface? Definitely. Is it actually blackface? The Internet is divided, and not just into racists and non-racists. Some people feel this scene doesn’t actually qualify as a racial caricature. Others feel like these surface responses to the demand for racial justice is distracting and irrelevant. Some just think this goes too far:

That Golden Girls episode isn’t blackface. What the hell ?

everyone: defund the police

everyone: no we said de—

everyone: that’s not wh—

everyone: what is happening

— every cop contribution is a policy failure (@aaronnarraph) June 28, 2020

I like how they think Black people don’t know our Golden Girls.

Dorothy, Rose, Sophia, and Blanche are the least problematic white women in all of television which is fairly impressive considering that show was on air in the goddamn mid-80s https://t.co/jPk8sJlh0w

Brands removing their problematic episodes feels like a way of equating Black Lives Matter with “cancel culture” to delegitimise the movement and court outrage. I haven’t seen one placard in these marches saying “REMOVE EPISODE 323 OF THE GOLDEN GIRLS FROM HULU”

They pulled an episode of the ‘Golden Girls’ from streaming because they wore blackface in it. Fuck each and every one of those old arthritic old bitches. And the people that wrote the episode.

Yeah, these companies and media platforms are trivializing the situation by sending the message that our demand for justice is as petty as removing episodes of the Golden Girls off a streaming platform. This is a calculated effort to cheapen our message. https://t.co/iAr5oVazkT

omg. okay, THEY WERE NOT EVEN IN BLACKFACE IN THAT EPISODE. i don’t even need to read it to know which one they’re talking about. Dorothy and the girls found out her son, Michael, was marrying a black woman. Blanche and Rose were wearing mud masks, PLEASE. #GoldenGirls

First of all, they were in mud masks not blackface. And second of all, in what world does “Stop killing us.” sound like “Please remove episodes of Golden Girls”? I didn’t see that ask on anyone’s protest sign… https://t.co/cgEcGdD60o

Whoever removed it either didn’t even watch it or is just not a smart person, which is as generous as I can be

Golden Girls joins more modern programs like Community, 30 Rock, and The Office in deleting episodes or scenes that include blackface. 30 Rock featured four episodes using the racist trope and was made 30 years later.