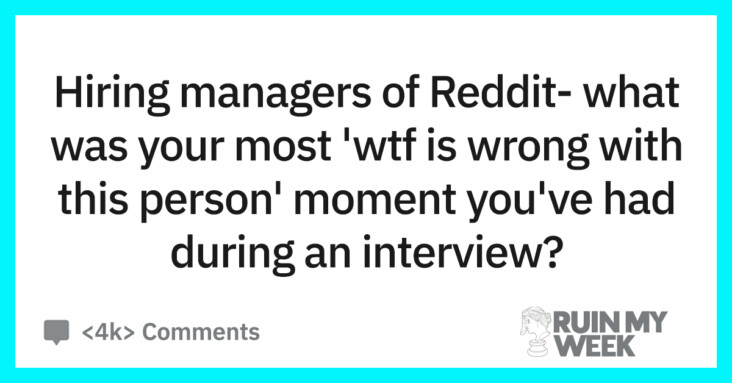 Reddit, believe it or not, is not simply for unemployed gamers trying to manipulate the stock market. Many people on the forum have real jobs. They even post NSFW photos from those jobs. You should check it out sometime if you’re tired of working. Anyway, the point is some people have the job of hiring other people for jobs.

I know. It feels weird. I miss the days when rich people leaned out a window and said “you there, boy. a shilling to clean my chimney.” Full disclosure: I was not alive when that would have been the way people found work.

A Redditor asked the question, “what was your most ‘wtf is wrong with this person‘ moment you’ve had during an interview?” and the world responded.

Hiring managers have a difficult task. They have to find the right candidates for specific jobs. But, after reading these funny horror stories, I’m starting to think their main job is to not hire a psychopath.

Enjoy these WTF moments from job interviews that you should definitely not do if you want to get hired somewhere:

“I once had a candidate for an intermediate level analyst brag during an interview that he used to work other jobs and play poker – while working his primary (office) job.

For example: for about 2 weeks (before he was caught and got fired from both jobs), he would take long lunches. No one knew where he went between 10:30 and 1:30. Turns out he had gotten a job making pizzas at the next door pizza restaurant and worked the lunch rush.

He also bragged about playing poker at work constantly. This was in the late 2000s, while online poker was still in its boom.

He bragged these things to me as if I, a relatively young professional at the time, would think he was cool. Or maybe he thought it demonstrated his ability to multitask and still get his job done. I have no idea. Either way, we did not extend him an offer.” -anonymous

“Me: I see you managed a vegetarian restaurant.

M: It says here you managed a vegetarian restaurant.

I: Oh, I guess I did write that. Not really though. My girlfriend had an art exhibition, and I organized the sandwiches for the opening. They were vegetarian.

This was a candidate that was otherwise pretty impressive seeming, and had been among the favorites for a quite sought after position, the interview had even gone quite well up until this point. Met him later at a party, he had no memory of me.” –squirrel_exceptions

“This kid, probably 18-20, started picking his nose, like nuckle deep and digging for gold in the middle of his food service job interview.

Wrapped that up real quick and didn’t hire him.” –tactics14

5. The lying liar who lied a lot

“…the most egregious lie that stands out in my head with her was when she commented, when I suggested she not take a particular route to the train station because it was dark and potentially unsafe (also, I was headed to the same station and did not wish to commute with her) that she had a blackbelt and had practiced martial arts for years.

“Hiring for a Senior Dev position. Had a telephone interview and she seemed confident and competent so I flew her down for an on site interview. She calls not me but the front desk reception and says she can’t drive in a big city and needs a car to pick her up and she refuses to get the rental car we reserved (before Uber/Lyft).

Call is transferred to me and I tell her to take the train (Atlanta, MARTA) no, she says, too scary. I tell her to go to the taxi stand and take that, nope afraid of taxis. She wants a corp limo to pick her up and nothing else will do. She is adamant. I put her on hold, have a chat with my boss who says just send her home, she’s too much work if she can’t even handle this.

I tell her thank you for taking the time to fly down but not even our own VPs get that treatment and to go ahead and change your ticket to fly home, now. She then starts telling me she will take a taxi, etc. i said please don’t bother it will be a waste of everyone’s time, thank you, goodbye.” –blatentpoetry

During the job talk, he kept flashing the pink satin liner of his suit jacket in the direction of one of our openly-gay grad students.

Later, he proceeded to get trashed during the meet/greet with the students at a local bar and confided all of the dirt about his current department and overshared the status of his rocky relationship with a grad student back at his home university (a big no-no, even though it happens sometimes).

The next morning sealed the big fat no. A grad student usually volunteers (and is compensated) to drive the candidate back to the airport. This person kept trying to persuade the openly-gay grad student to drive him instead, even though another student (female) already had the task assigned to her.

He didn’t get an offer.” –periphrazein

“When she listed all of her ex boyfriends that currently worked there, and said she couldn’t wait to see the look on their faces when she showed up to work. This was in the first 3 minutes of the interview so I wasn’t even close to offering the job yet. I cut the interview right there and sent her on her way.” –lovelanguage_sarcasm

“This was about 3 weeks ago. We had a woman who works at the (generic retail big box store) across town wanting to transfer to our store of the same name because it’s closer to her house.

She showed up for the interview wearing a faded tshirt from a local redneck bar, complete with rebel flag, cut off jeans, and flip flops. During the interview she proceeded to talk shit about 6 different managers/associates by name from her current store.

She cussed during the interview. And kept telling us more and more about the people she didn’t like.

Do people not realize that if we hear them talking shit about them, that we know she’ll do it to us too? And at least dress for an interview.” –plsdontstalk

10. The last time you recommend a friend to HR

“HR – He was naked during the interview so we declined.

Me – What?!?! Are you serious? I find it hard to believe he would show up to an interview nude.

HR – Well it was a skype interview, and when we brought up his video feed he was laying in bed nude.

HR – We told him we could see him and he said “sorry” then covered up with a sheet. We asked if he wanted to reschedule and he said no he was good. So yeah we decided to pass.” –Boxman75

“I’ve had two separate cases where people were so confident that they had the job that they botched the interview. On one of these, I wanted to tell the candidate to go out and come back in again, because he was one of two very good choices and his arrogance put my team off. They thought the other candidate would be a better fit.” –Flahdagal

“I was performing a video interview with a candidate. They were clearly in a large room/bedroom, with most of it visible in the background, but it was clean so I didn’t mind. In the back right corner was a closed door. About 7 minutes into the interview I see the door open slightly and some dude poke his head in, see that his roommate/girlfriend was in an interview then close the door. Not a big deal, it happens.

I ask my next question and let the candidate respond. But then, about 30 seconds later I see the door slowly open again, only this time the dude comes crawling out the bottom. He continues to crawl across the floor making his way to the opposite side of the room. I assume he thought he was out of the cameras FOV, but he was clearly visible. He gets to the far end of the room and turns to fiddle with something ass in the air facing the camera. Finally, he finishes up with whatever he was doing and makes is way back and out the door.

I know I should have stopped the candidate and had her deal with the dude, but it was so funny to watch I had to let it play out. I could barely contain my laughter and after the interview finished I lost it. She got the job though, and from what I remember was a great employee.” –xantyrn

“The strangest ever was a man telling us all about his mom’s Alzheimer’s, talking crap about our company, and getting upset we didn’t offer him the position on the spot. It was a wild ride beginning to end.” –Sharkattackr

“I had someone show up in daisy dukes and cowboy boots for an office job at a 4 star hotel.” –soup452

“To start the interview, I asked him to tell us (3 people) a little bit about himself.

35 minutes later, he stopped talking. Usually people answer this question in 1-5 minutes. It was incredibly awkward and I was tempted to interrupt him but then truly wanted to see how long he would go.” –DefinitelyYoda