There are many arguments raging on Twitter. Some are tearing communities apart. Friends, families, all are bitterly fighting over all manner of things. Yet, the most divisive argument of the week is all about animals.

Twitter user Dan Nolan shared a meme that has circulated for some time, writing, “I’ve been driven insane by this,” inviting everyone else to go absolutely insane too.

The meme shows nine panels featuring animals with a number: 50 eagles, ten alligators, three bears, seven bulls, a single man with a gun, 15 wolves, 10,000 rats, five gorillas, and four lions. Below, it reads, “Pick two. They will defend you. the rest are coming to kill you.” 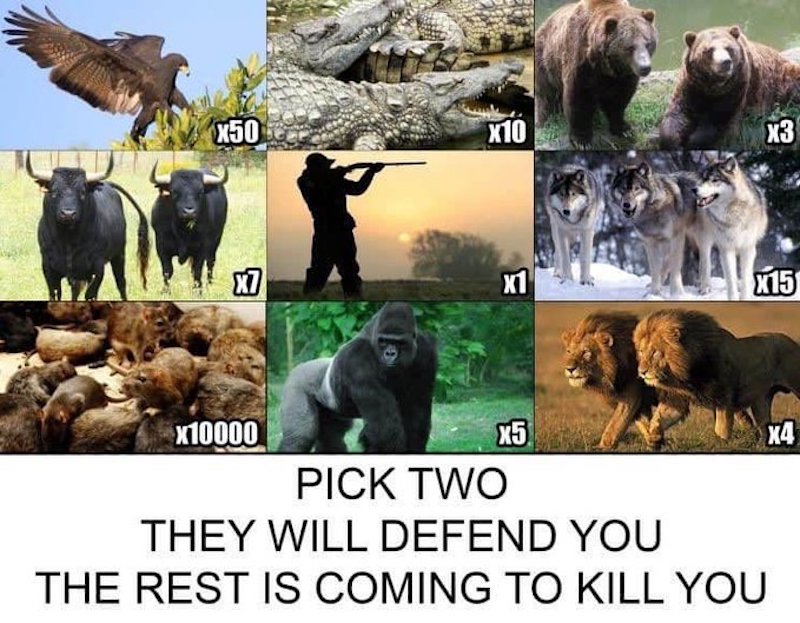 The debate quickly got ugly. Maybe it’s because everything else we’ve been arguing about seems too serious to fight over amongst your mutuals, but people really let loose with their animal opinions. People were willing to bet their lives on their ideas about which animals would be the best defense against all the other animals —as indeed you would be. It is a matter of life and death:

The True Gamer has arrived

Anyone not picking the rats is a fucken idiot. Honestly, the only two choices are rats + eagles (so you’re not fending off eagle talons from above) and rats + human (because you’re not bulletproof).

feel like people really underestimate just how many rats 10,000 is https://t.co/jVg7lvlnOy

how you gonna stop the eagles though? Unless gun guy is on full-auto he’s gonna get his eyes picked out. I think you have to take rats and eagles simply bc no other combination can protect you from either of those.

eagles and wolves is the only correct answer. all the rat people are DELUSIONAL https://t.co/R1A5iZFEUy

If I’mma die anyway, I might as well go out alongside 15 wolves and 4 lions like a warrior goddess. https://t.co/mJVmQRsWpR

It’s a Kobayashi Maru. You have to pick the guy or he just shoots you, and two people can’t defeat that many rats no matter what. So even with the rats and the shotgun guy, you can’t even stop all the bulls (let alone the rest). I would choose to die with the wolves and lions.

There was also a lot of frustration over the missing aspects of the meme. For instance, what is the terrain? Are we judging based on efficiency? Strength? Numbers? The analysis got in-depth and intense:

I need more information about the battlefield. Can I choose it? If so I’m sticking with my current team and the showdown will be in an estuary or flooded delta. If it’s a jungle, alpine, urban or savannah environment I may choose a different squad.

If they’ve been affected by green toxic ooze even better. Imagine 10,000 Master Splinters on the rampage? pic.twitter.com/2UzpKLvkj7

If they’ve been affected by green toxic ooze even better. Imagine 10,000 Master Splinters on the rampage? pic.twitter.com/2UzpKLvkj7

My man made a damn graph

there is no choice other than rats and hawks pic.twitter.com/k1ErUA4PYb

It’s truly a difficult choice and ultimately comes down to what kind of general you are. Do you fight to defend? Or fight to go out in a blaze of glory? Answer that first, and you’ll know who stands by your side (it’s 10,000 rats and a guy with a gun, obviously).