Having an identical twin can be both a blessing and a curse. You have a built-in playmate and confidant, but you also have a built-in competitor for life. Growing up sharing everything can easily lead to resentment, especially when it comes time to try to make your own way in the world.

But one twin gracing us with her life story on Reddit is taking the idea of paving a unique path for herself far too seriously.

User skearns68 turned to the infamous Am I the A—hole? subreddit to find out if she was being unreasonable in “having an issue with [her] sister’s child’s name.”

First, she lays out the appropriate backstory for the drama. She has an identical twin (referred to as S), her parents gave them rhyming names (yikes), always dressed them the same, etc. It admittedly does not sound like an ideal childhood.

But eventually, the original poster and S made their way to different colleges, got married, and made plans to start families in separate locations.

And that’s where things start to get messy.

The OP is pregnant and says she and her husband “spent a lot of time picking out the perfect name” for their upcoming baby. Meanwhile, S and her husband have been unable to have kids and decided to adopt.

“They wanted a baby but ended up having to go with a slightly older kid, 5,” the OP writes. “She looks absolutely precious and I was so happy for a few seconds before they announced her name is B, the name that S KNOWS is my daughter’s.”

Rather than chalk the whole thing up to an unfortunate coincident, the OP is convinced her sister is trying to sabotage her baby on purpose.

“Obviously the girls can’t have the same name,” she says. “Everyone would laugh at us…They won’t be able to have a good relationship because of this. I don’t want people nicknaming my kid to distinguish her because I like the FULL name I chose.

“And I can’t help but suspect that S picked a kid with the same name on purpose just like she always wanted to be like me when we were kids.”

That’s right. She literally believes her sister chose her future child simply because of her name, to make it a twin thing. 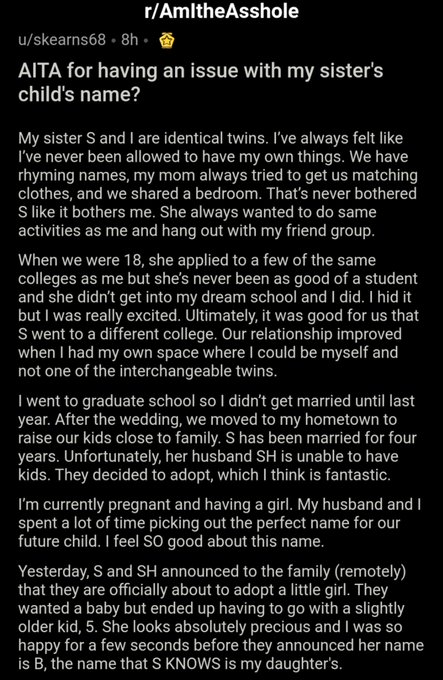 OP continues to go off the rails, insisting her sister needs to change her new daughter’s name.

“My kid will get here first,” she says, ignoring the part where the other child is already five years old, “and I picked out the name first.”

If her sister refuses to change the kid’s name (something OP believes is common among parents of adopted children), she suggests that they could instead just “go with a different kid” since “99.9999% of [orphans] don’t have this one particular name.” 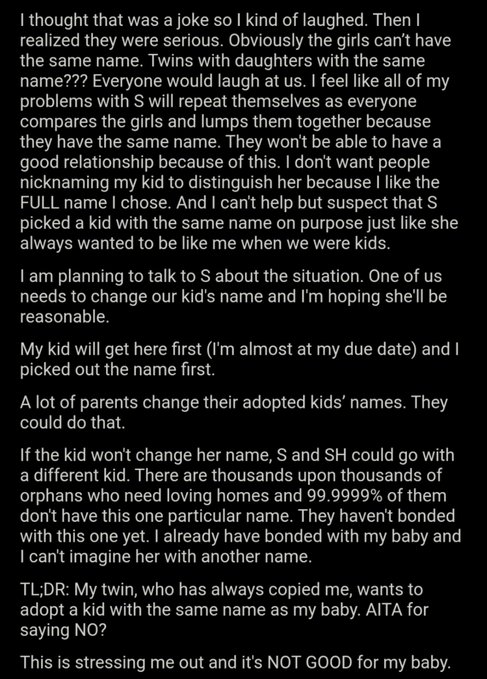 People on Reddit did not hold back in their responses to this insane saga.

“My son is the fifth person in my family with his name. Somehow we all survive,” wrote Whiteroses7252012.

Another user pointed out that adoptive parents don’t generally just change their kid’s name on a whim, but rather only “with like, infants who have no attachment to the name, or if it’s necessary for the kid’s safety, not to some random 5 year old because someone in the family wants the name.”

Other commenters were equally unmoved by OP’s tale of woe.

Or just you know, change a 5yo child’s name just for funsies!!!!

I suspect the people voting NTA and ESH don’t understand adoption, much like the OP.

This woman is profoundly cruel lol. This orphan deserves to be an orphan forever because of her name!

Oh I read that as her sister was changing the five year olds name to the name she picked for her baby. Yeah OP sucks for suggesting that. 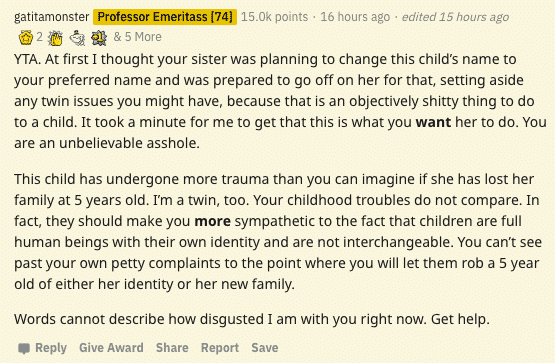 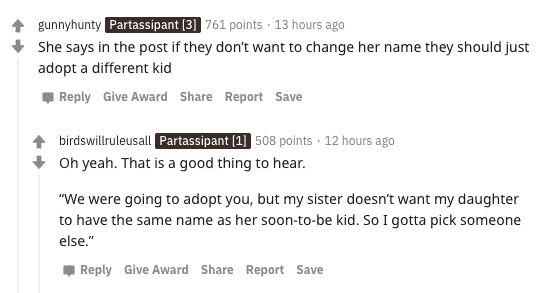 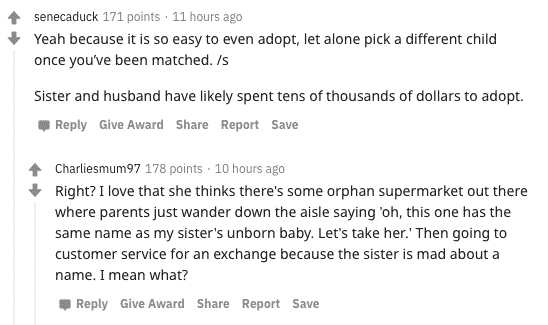 Hopefully, OP will look back on this moment as an incredibly bleak, hormone-induced break with reality. But if not, if she’s that desperate for a child with a specific name, maybe she can take the five-year-old and her sister can take the new baby. Actually, maybe the sister should just take both kids, for the children’s sake.