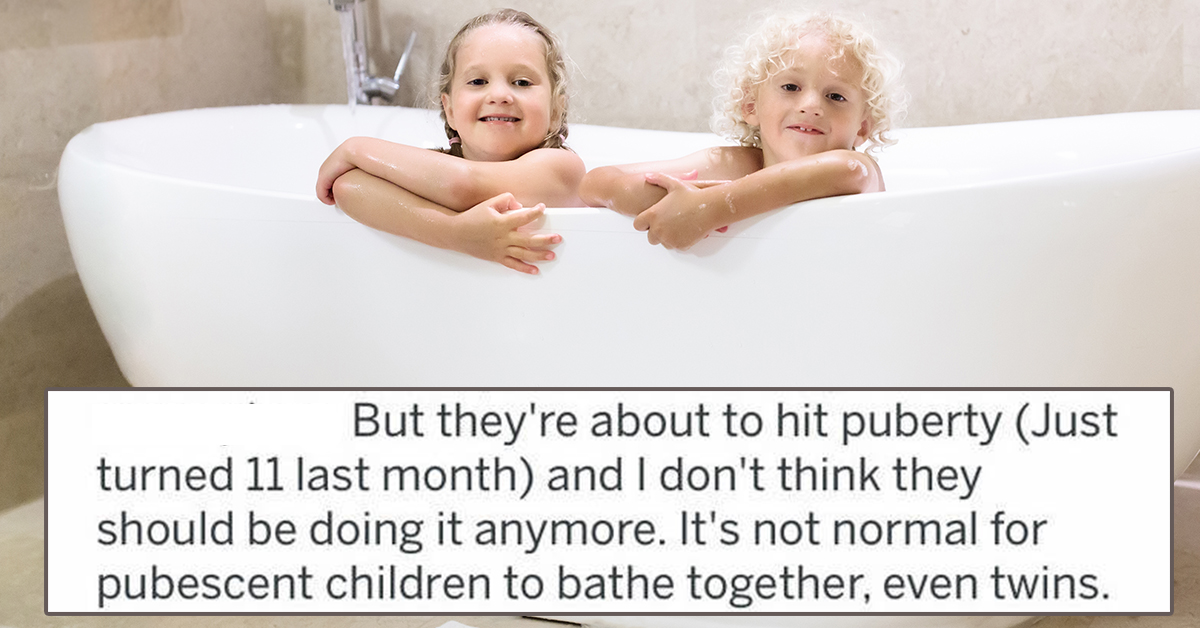 There this idea that good parenting is just one thing and everyone needs to do it the same. In reality, what dictates good parenting has a lot to do with societal norms and of course the personalities and needs of your actual children. Plus, what your co-parent believes, if you have one. It’s a lot to figure out! This dad posting on Reddit isn’t sure what the right thing to do is. Normally, I’d say asking the Internet isn’t always the best idea, but some of the answers to his question are pretty helpful.

He posted to r/AmItheA**hole, which is kind of an interesting choice. Seems like this story should be on a parenting subreddit. His reasoning seems to be that the issue sparked an argument between himself and his wife and he can’t tell if he’s in the wrong. He says he has twins who have been a “blessing on the lives” of himself and his wife. Great start. Things then take a turn:

When we first had them, we bathed them at the same time just to save time and because it’s easier to keep an eye on them if they’re in the same place. But they’re about to hit puberty (Just turned 11 last month) and I don’t think they should be doing it anymore. It’s not normal for pubescent children to bathe together, even twins. When I was younger I never saw my siblings naked, and I think that’s the way it should be. It’s not just this, though. They’re very close. They hang out all the time at home, in each other’s rooms. They hug all the time and they hold hands in public.

I brought it up with my wife, and she disagreed. She says they’ve been doing it their whole life, they’re just kids, etc, what’s the problem with it? She says it’s wrong for me to sexualize them in the first place, since they’re just kids and they’re siblings. What do you think? Am I just being a prude?

Yeah, I dunno. Hard to say. The bathing stuff is very dependent on what is considered “normal” in your culture and American culture is extremely prudish in that regard. We can’t tell from the post where the OP is from, however. I think it’s weirder that he has problems with his twins hanging out together and showing deep affection. Breaking them apart and implying they’re little perverts for liking each other seems like a bad way to go. 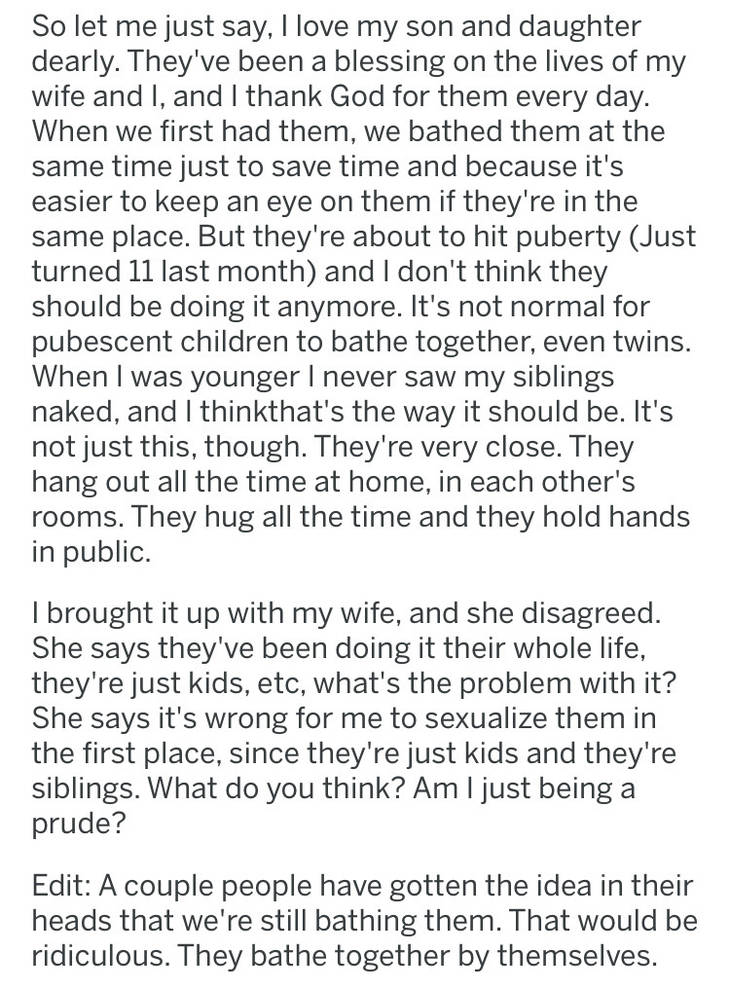 A lot of people still didn’t think he was being an a**hole about the bath thing, and kept calling the kids “creepy” for doing something they were raised doing: 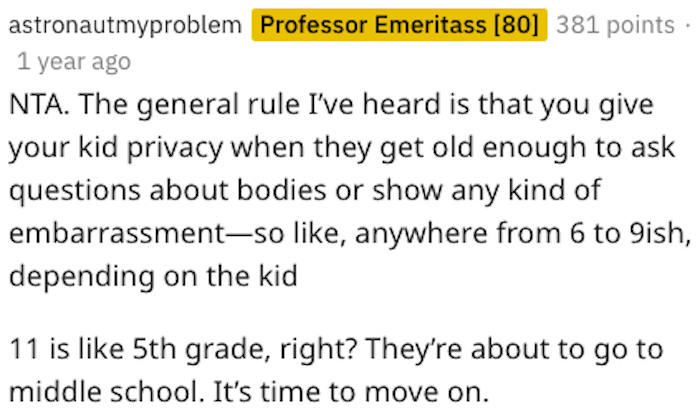 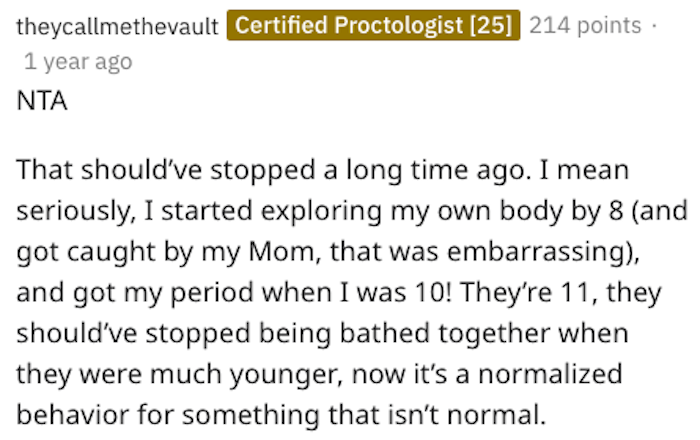 But a lot of others didn’t think anyone was in the wrong, really, and many mentioned showering or bathing with relatives in a completely non-sexual way until they were pretty old. Because it’s not sexual if you don’t make it sexual: 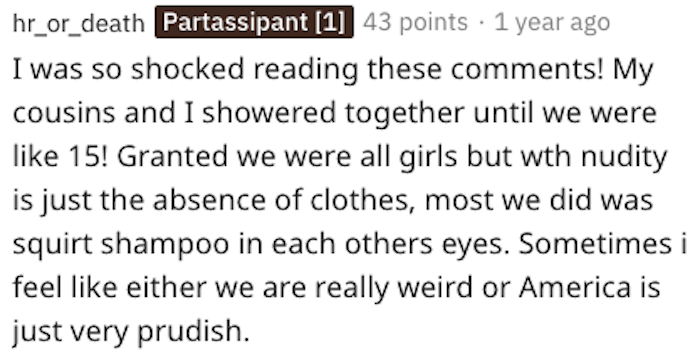 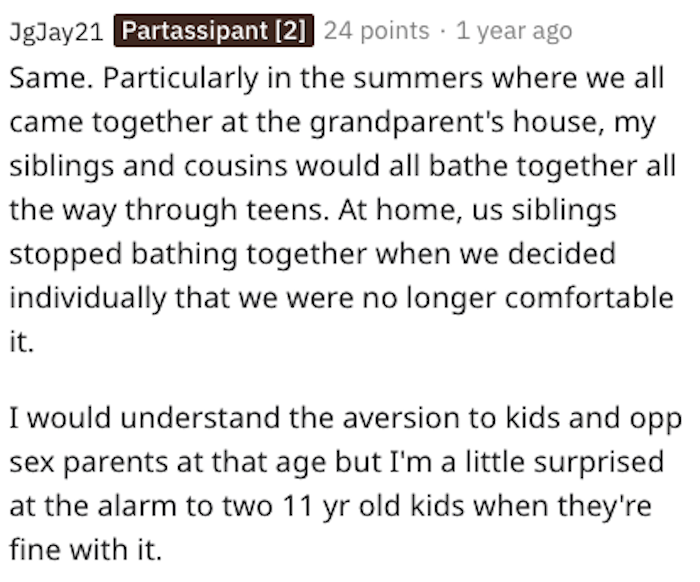 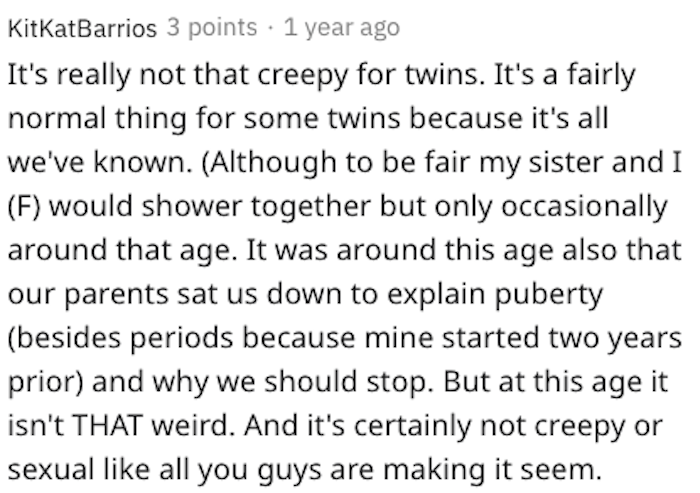 The best answer in my opinion might be from Redditor kittysezrelax, who wrote that there’s nothing weird or creepy about these twins and the dad definitely shouldn’t make them feel like there is. If it’s time to introduce separate bathing practices, the parents can do so without creating shame or awkwardness between their kids: 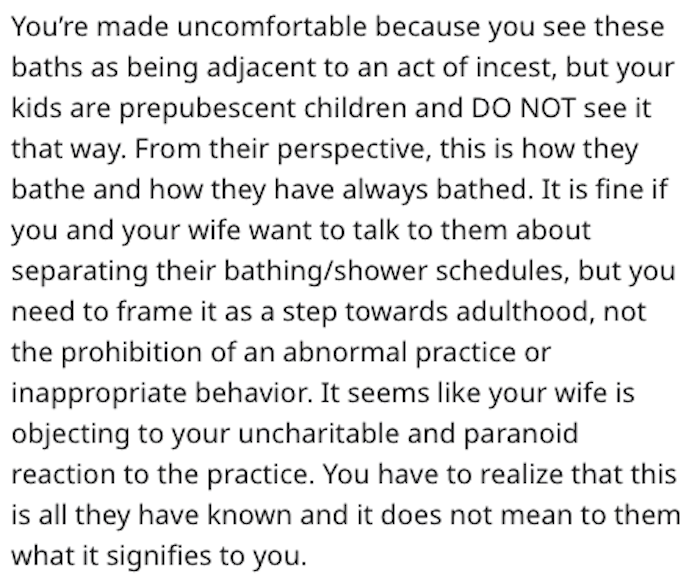 Changes happen as kids age and develop, but let’s try not to mark those changes by calling them creeps. That’s absolutely bad parenting.