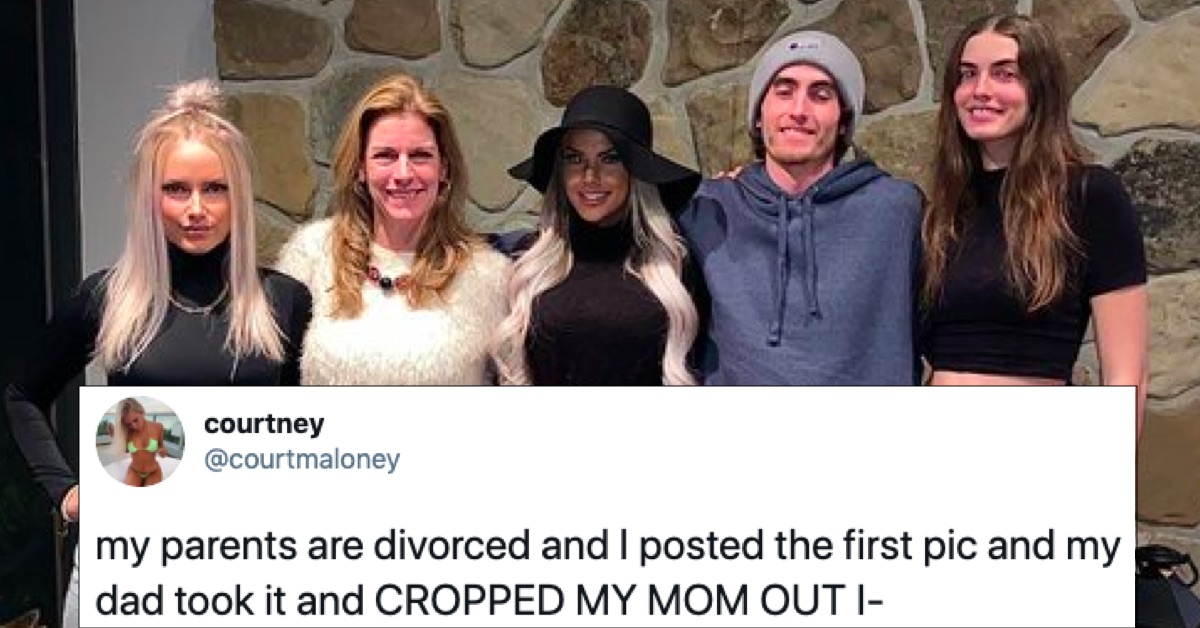 Families of divorce get complicated.

If you have kids, you will hopefully find some friendly way to co-exist with your ex, but a lot of people don’t.

Twitter user @courtmaloney posted a short story in two pics that illustrates a lot about how her divorced parents are dealing with their split.

Courtney captioned the images, “my parents are divorced and I posted the first pic and my dad took it and CROPPED MY MOM OUT I-“

The first pic shows what looks like four siblings and their mom in front of a fireplace:

She shared a screenshot of her dad’s Facebook version, which has cropped mom out, writing, “The SHADE????? the SKILL???”

It should be noted that the mom wasn’t on the edge of the frame or anything. She was smack dab between two of her kids, but if you didn’t see the first photo, you likely wouldn’t notice that she’s missing in the second one. I don’t know if this guy is a professional photo editor or what, but it’s a pretty amazing job for the average Facebook dad.

he just so nonchalantly said “❤️🙂” like it was nothing 💀

She also says her mom found it “funny,” so good for mom. But other people chimed in to say that Courtney’s dad is immature and going to this kind of trouble to get mom literally out of the picture is childish and weird:

A very childish thing to do. That goes to show she is on the right and a victim of parent alienation inculcated in your minds by your dad. Give it a thought.

Don’t approve the move but the crop was skillful. And abhorrent. And not what an older adult should be spending his time doing because it is a depiction contrary be fact.

Hey, if the family members involved don’t care, don’t go into someone’s mentions to drum up drama. They seem to be managing that on their own just fine. And maybe for the next holiday, they’ll take a couple of photo alternates so dad doesn’t have to do so much work.