A trailer park in Fort Morgan, Colorado, has become the scene of yet more election coercion on behalf of Donald Trump. Other reports of employers threatening people’s jobs if Joe Biden should be elected are horrifying enough. In this situation, the landlords of the trailer park are reportedly threatening to double the rents of residents should Trump lose the election.

The threatening letter sent to renters was reported on by 9NEWS after they received several emails from residents trying to attract attention to the attempted voter suppression. It reads:

“TO ALL TENANTS:
Please understand IF Joe Biden is elected as our next President, everything you do and have to pay for will change completely.

Everything will be increased. Like paying ALOT (sic) more in taxes, utilities, gasoline, groceries, new permits, fees and regulations…everything! This also means YOUR RENT will be increased to cover these expenses. Most likely, rent would DOUBLE in price!

IF the current President is re-elected, WE WILL NOT RAISE THE RENT FOR AT LEAST 2 YEARS!

Voting is your choice and we are not telling you how to vote. We are just informing our tenants what WE will do according to the election results. 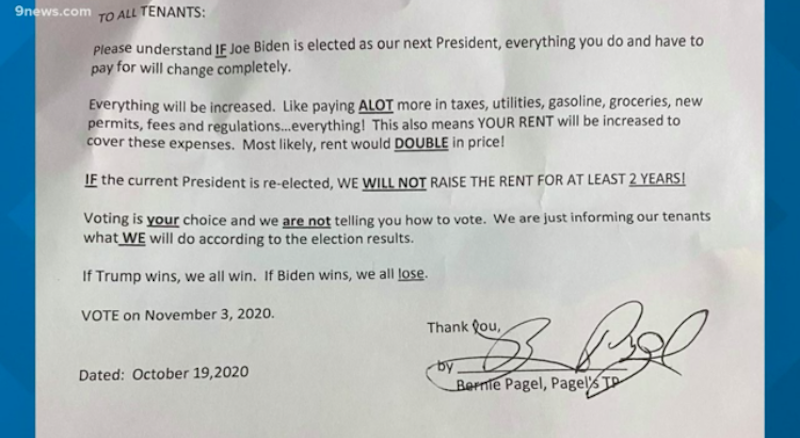 Residents are shocked and hurt by the message in the letter, regardless of their political affinity.

A tenant named Cindy Marquez told 9News that her family has lived in the park for 20 years and this is the first time something like this has happened around an election. She ended up translating the letter for her Spanish-speaking parents and notifying her neighbors, as it had been slow to circulate despite being dated October 19th.

She continued, “I mean everybody was pretty shocked, honestly. It was mainly hurtful, you know? How could someone say something like that or basically threaten us according to something that we can’t control?”

Even landlords can join the fun game of voter suppression! #bidenharris2020 #NoFear pic.twitter.com/Xaef9gwEot

The threat of doubling the rent is a frightening one for Marquez’s family and many of the other tenants at the trailer park.

“Our family lives paycheck to paycheck and right now we barely make things out with what we get,” she said.

The landlord has not responded for a request for comment, but the Colorado Secretary of State’s office told 9News that they’d received the complaint about the voter suppression tactics and sent it on to the Attorney General. Meanwhile, it might be time to think about starting a tenant’s union at Fort Morgan.