The crowd on r/AITA can go either way when it comes to issues around parenthood or kids. There are enough single people that get annoyed by children and the adults who have them that sometimes someone acting like a jerk towards a parent gets a pass. It seems like user u/myfeetf–kinghurt still went too far when he posted, “AITA for not giving up my seat to a pregnant woman?”

The OP claims he told his family about the altercation he had with a pregnant lady and they are all saying he sucks, so he’s double-checking with the Internet. At first, I thought there could be a legit reason, like an invisible disability or some other extenuating circumstance. Nope! He’s just tired.

He says he takes the bus because his car was recently totaled and he’s waiting for insurance money to come through. His job involves being on his feet and he says he looks forward to sitting on the bus before walking from his stop to his home:

So last night I’m on the bus, and a very heavily pregnant lady gets on. She looks around for a seat, only to find there are no available ones left. I’m the closest to her, so she starts giving me the imploring eyes. I had my headphones on and tried to pretend I couldn’t see her, but once she started talking to me it became inevitable.

I wasn’t rude or anything, I just told her no, I’ve had a long day and my feet are sore. I don’t want to give up my seat. She started crying about how she’s a pregnant single mom, and I told her I’m sorry, but that was her personal choice and she can’t expect other people to accommodate her life choices. We live in a state where birth control and abortions are free, so I don’t know why this should be my problem. It’s not my fault she decided to have a baby when she can’t afford a car.

Right. People who want to feel comfortable standing on the bus should get abortions. Sound logic there. The OP says the two started arguing a bit and then an old man yelled that the OP was a  “worthless punk” and offered his own seat.

He started ranting and raving about the “damn millennials” and I just looked the other way and pretended I didn’t hear it. As they were trading seats, the bus driver had to slam the brakes for whatever reason, and the pregnant lady and the old man both fell. They started yelling at me, calling me all sorts of nasty names, but I just looked the other way and ignored it.

The OP says he told his family about what happened when he got home and they chewed him out, but he says he doesn’t know why “we need to keep perpetuating the idea that breeding somehow means your[sic] entitled to people’s seats.”

Gross. A lot of commenters said they might have considered the OP’s position if it weren’t for the really disgusting way he talked about a pregnant woman. And the reality is that a pregnant person is more likely to be injured or even die if they fall down, which is why there is priority seating on buses. It’s unclear if he was in one of those seats or not, but with COVID-19, entering and exiting the bus has also changed, so priority seating may have shifted. Most people thought he was definitely an a–hole: 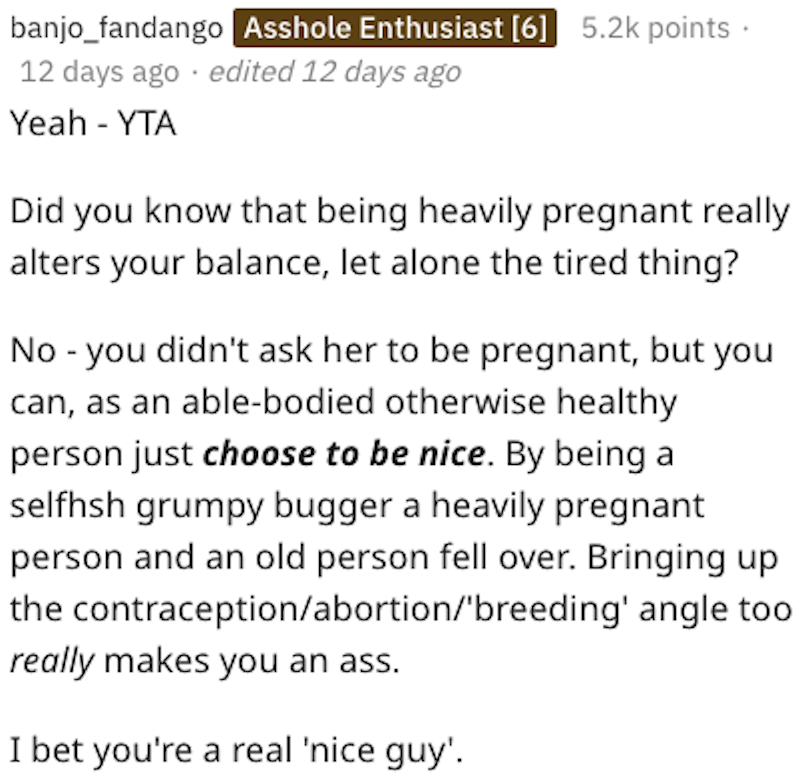 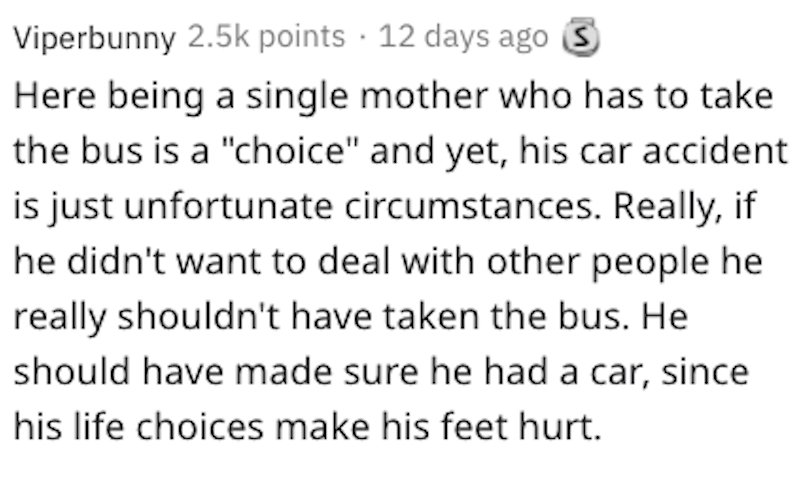 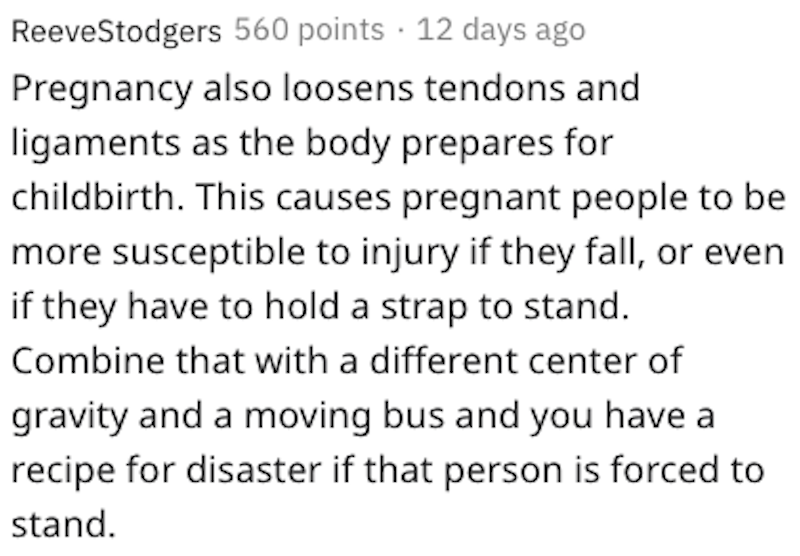 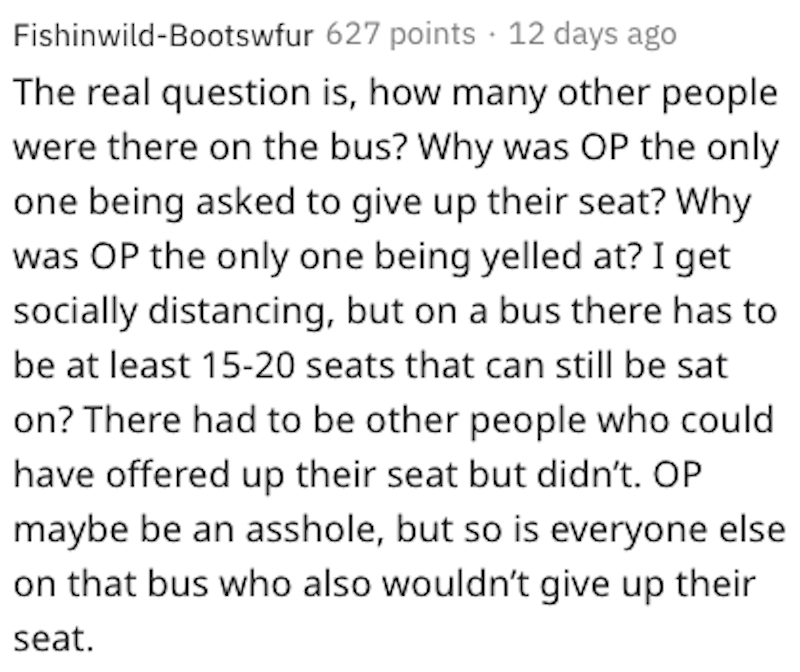 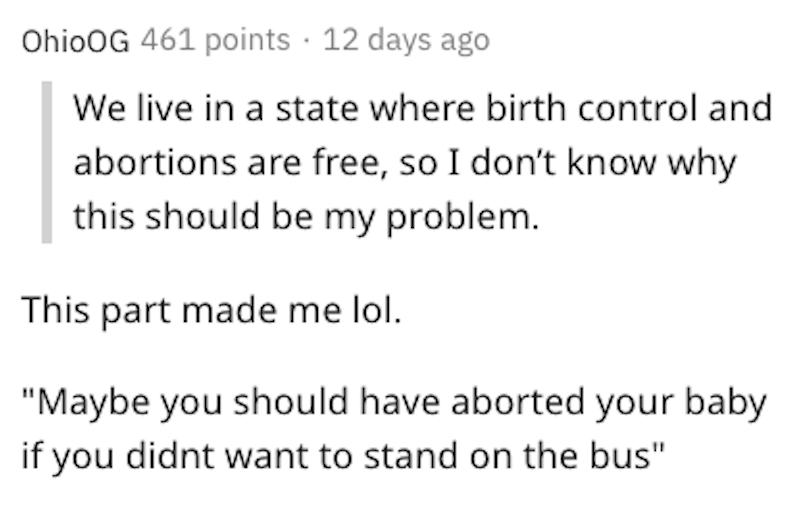 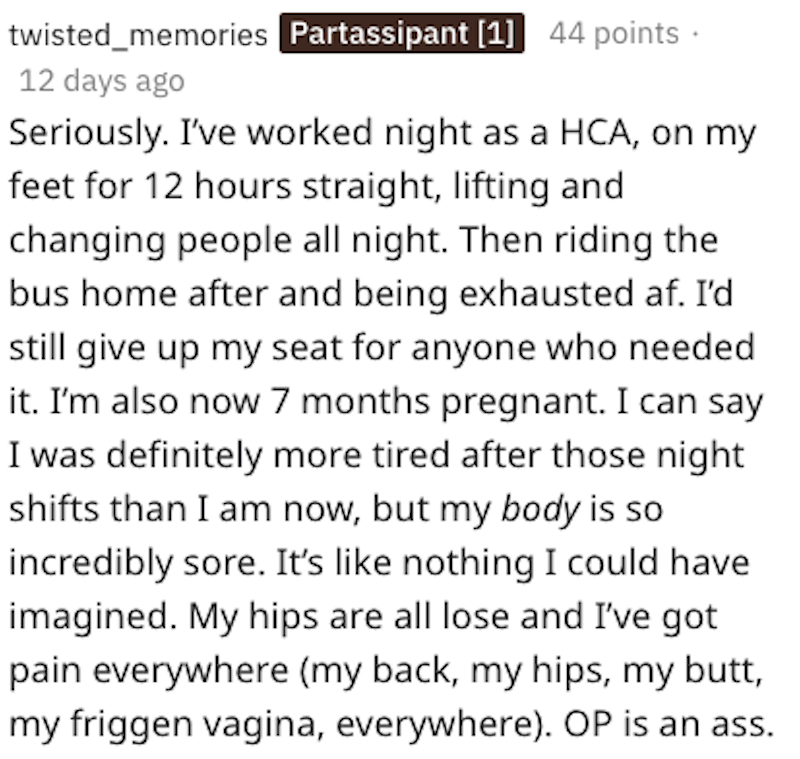 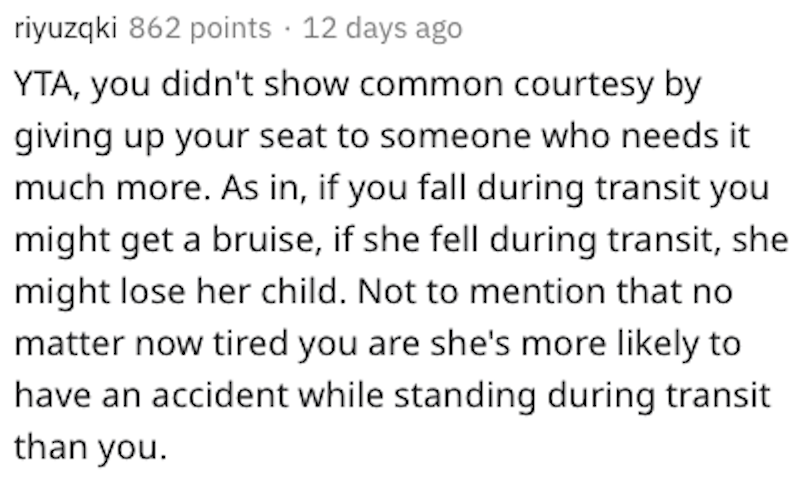 More importantly, this subreddit is used to decide if someone is an a-hole, not if they are technically within their rights to do something rude. Technically, the OP had no obligation to give up his seat. Morally, he’s a big a-hole.