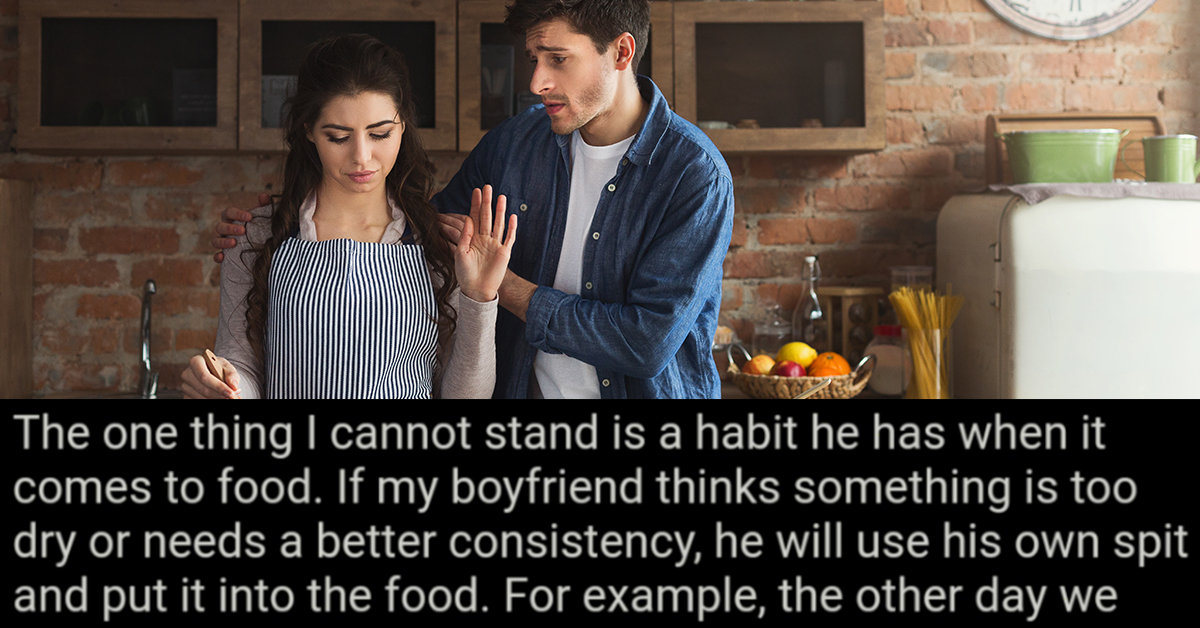 Hello, welcome to the “I cannot fathom this level of nasty” Reddit storytime. It was told by u/throwRAim68 on r/AmItheA**hole, which is swiftly taking over r/relationships for dating horror stories. The OP’s title for her post was, “AITA for telling my boyfriend not to spit in our food?”

If you think she’s referring to him just reusing a spoon, or something, brace yourselves.

She starts by saying, “We’re currently not speaking because of this issue, since I find it gross and my boyfriend can’t see my problem with it.”

Apparently, she does most of the cooking usually, but sometimes they have baking or cooking projects together, especially since quarantine. But things are not paradise:

The one thing I cannot stand is a habit he has when it comes to food. If my boyfriend thinks something is too dry or needs a better consistency, he will use his own spit and put it into the food. For example, the other day we were icing homemade cookies and I caught him ‘thinning out’ the icing mixture by spitting inside the bowl and mixing it in. 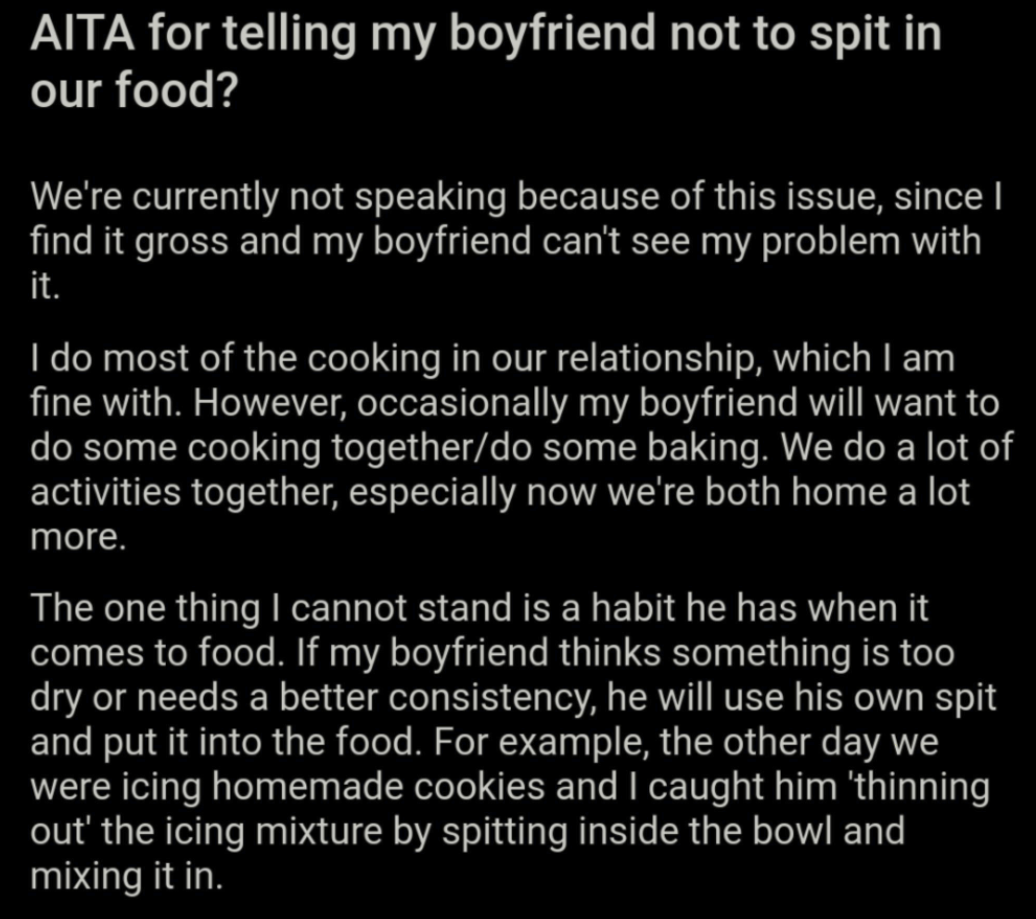 Help. Help me, Jesus, let this not be real. If it is, this means he has done this more than once and she is still with him! Why?! And it has apparently become such an issue, he now sneaks spit into her food:

This has been an issue for some time, so he tries to hide it whenever he does it from me. But every time I catch him I just find it gross. His reply is to shrug and tell me that I get more of his saliva in my mouth when we kiss anyway, so it shouldn’t be a big deal and makes literally no difference. I’ve pleaded with him to use water, but he says that ‘the texture isn’t the same’ and has pointed out that ‘if I can’t tell the texture is different, surely it doesn’t matter that it’s not water anyway’.

I know that in a way he’s right and it’s not like I complain about his spit when we make out, but something about it being mixed with food just grosses me out.

AITA for not wanting my boyfriend to spit in our food when we cook together? 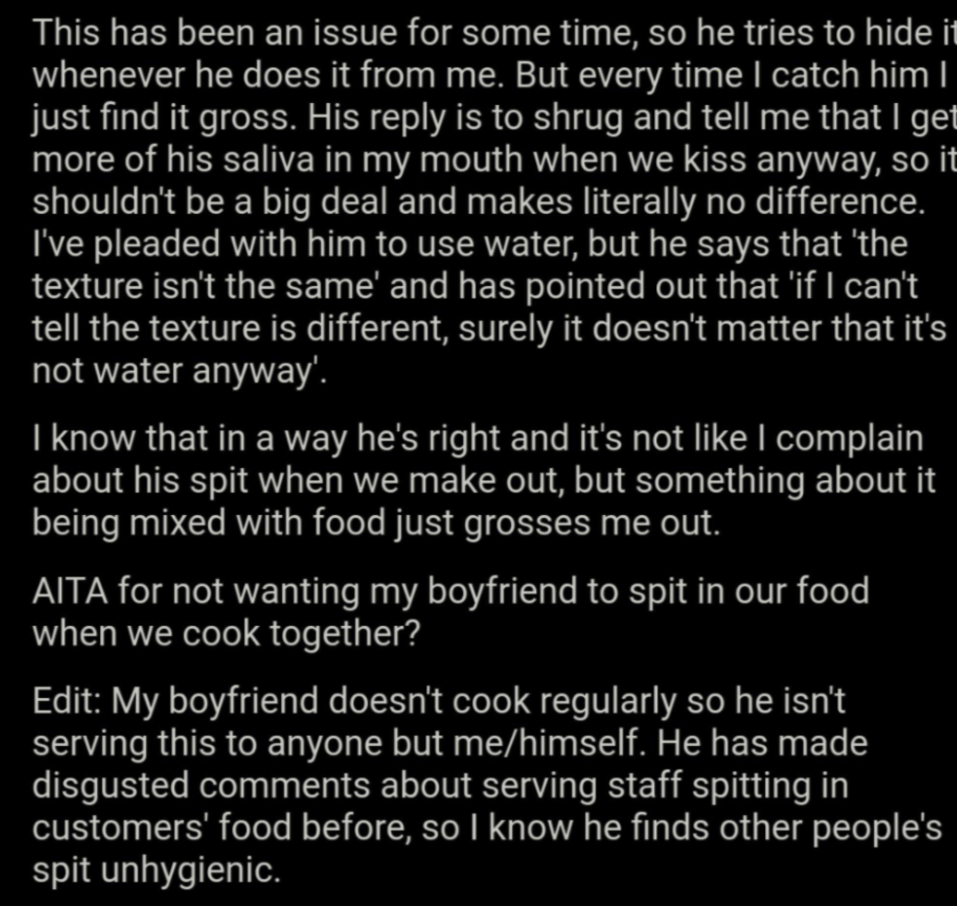 No. Absolutely not. NO. And no one else thinks so either: 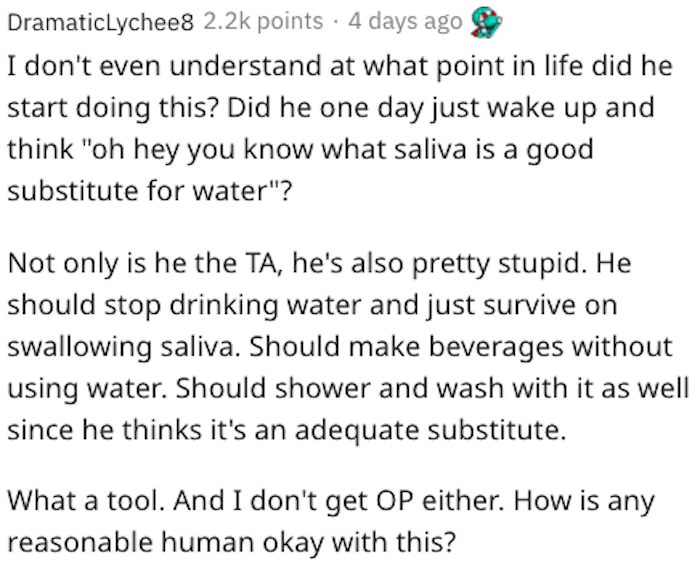 The only thin, almost invisible line of silver around this stinking cloud is that they at least don’t serve this food to other people, and the OP edited to say he seems grossed out by the idea of a waiter spitting in his food based on past conversations. Seems hypocritical, but whatever, least of the issues here.

So yes, everyone agrees it is gross. But it’s not just that spitting in food is disgusting, this guy is disrespecting his girlfriend on a deep level and for no good reason. That means his reasons are largely psychological and the psychology of someone who does this is bad. They want control and they want to violate consent: 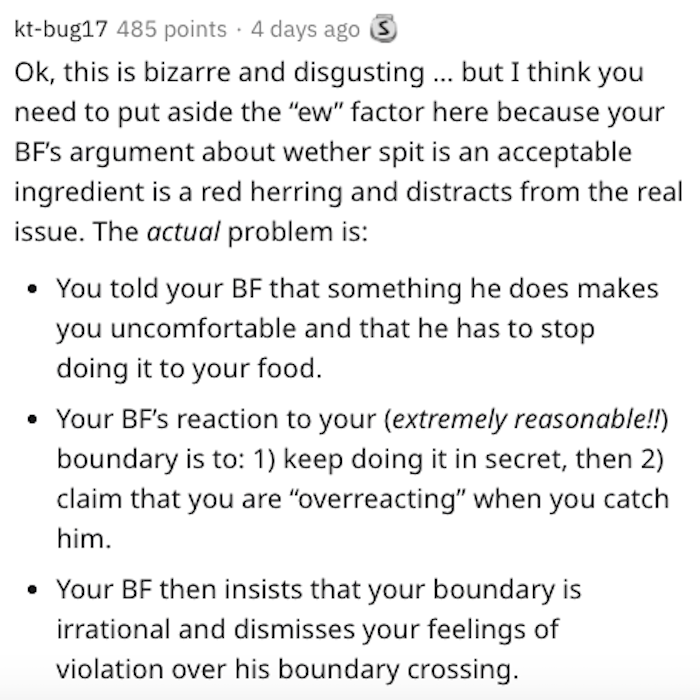 AND, may I add that the spit you get from someone’s mouth may have bacteria in it, but not the number of bacteria that spit sitting in food has. That’s where it grows, replicates, becomes poisonous and makes you sick, as several other helpful people explained: 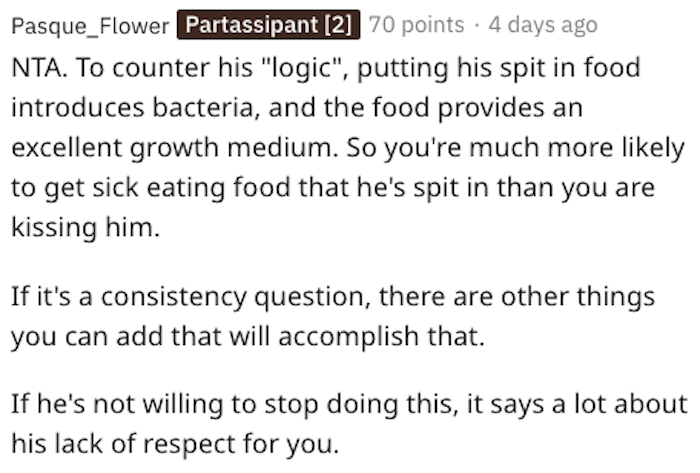 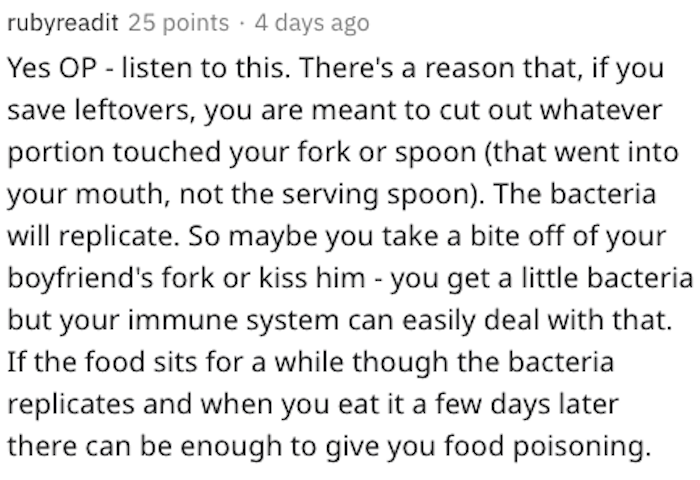 I hate that I have to write this, but ladies: you can find someone to love who won’t spit in your food behind your back. I swear.