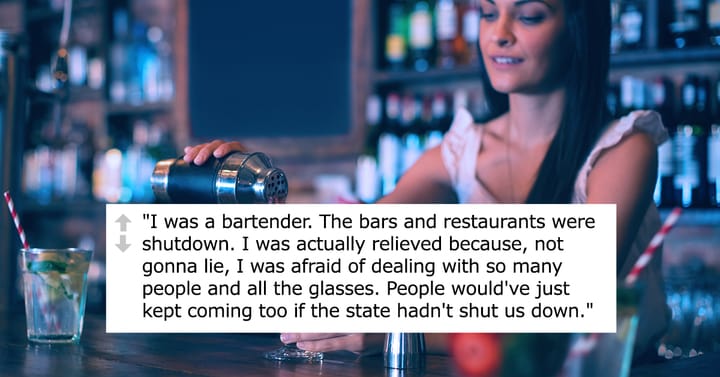 Coronavirus has completely upended almost every facet of our lives. What started with a mild-ish virus across the world—an abstract idea, in a sense—became a full-blown global pandemic. In under a month, thousands have been infected and died, cities have shut down, the economy has collapsed, and strict self-isolation measures are in place.

Sadly, individuals and families across the United States have lost their only sources of income, leading to loss of health coverage, insurmountable anxiety, and talks of rent freezing and government handouts. Someone on Reddit asked those people how they’re doing:

People who lost their job due to this crisis what is your story? from r/AskReddit

“I’m a housekeeper in Maine. I found out Thursday that I am being laid off indefinitely. Thursday I had a job, Friday I didn’t. In one week, I lost both of my jobs (I worked at my University, and a hotel), had to move out of my apartment (can’t pay my $800 rent, landlord not helping), and had to switch to online learning as a MUSIC major (no way in hell will that work). It’s 4:58 in the morning. I woke up from a nightmare, and woke up in a nightmare.”—lexiliza

“F&B manager at a large hotel. GM and HR gave me a list of employees to call and inform them that they would all be furloughed. It was the hardest thing I’ve had to do in my life. I had to stop halfway through the list just to sit in my office and cry. I had to encourage grown men and women that everything would work out and be okay when I had no idea myself if or when it would be. I went to work this morning, worked my normal 10 hours, then I was laid off at the end of the day. I cried again on the way home.”—PM_ME_YOUR_TYLENOL_PM

“My husband got laid off on Tuesday. He works about 3 minutes down the road from my work. He showed up at my work with tears in his eyes, apologizing to me for not doing good enough to be kept. He works at a car dealership as an auto technician, where they let go of four techs that day cause of decreasing business. They’re letting go of more people this Saturday. My brother is a mechanic there, and is scared to lose his job too. They told my husband that when business picks back up, they “might” call and ask him to come work for them again. Thankfully, I work in the lab of a hospital, so my job is pretty secure. I keep telling my husband that we’ll get through it, but I know it’s taking a toll on him.” —tazzybugg

“I haven’t been laid off, but I answer for the National Suicide Prevention Lifeline and we are having so many calls where someone is thinking about killing themself because they were laid off. It’s absolutely awful. I have no answers for these people, and I wish I had the power to provide for them.”—prettysjwtbh

“My mom works in vacation rentals doing housekeeping, she’s 61, diabetic and has COPD, and lives in a state that has mandatory shutdown of all non essential businesses. When she was informed they’d be laying people off, but also staying open, she told them she’s afraid of getting Coronavirus and they laid her off so she could collect unemployment and continue to pay her bills while staying home safe.” —canadianneckbeard

“I got laid off today. I worked in art studio. There were only a few of us and my boss owns the business. As it’s a small business she just couldn’t afford to keep me employed anymore. Business just stopped. Normally we would have 10+ orders a day, today we had 1. It sucks but I understand completely and she is the nicest boss. I live in the UK, and although the government are promising loans for small businesses it’s not helping/realistic. By that I mean the help is going to come too late. I really hope her business manages to get through the next few months. It’s going to be a difficult few months for a lot of us. I’m luck I’ve got some savings and still live at home so it could be so much worse.”—purpletoasting

“Solidarity. I’m a web developer, pretty much the same industry. (Fabric decor, projection screens, giant shade structures, etc.) I’m optimistic things will bounce back eventually, and I trust my CEO that I will be called back when that happens — he’s always been extremely good to all of the employees, and we’re good friends at this point—but I’m not optimistic that it’ll happen within the next few months.”—commodorebelmont

“I would guess it’s way more than that. We are one of the few hotels still open in the area and have everyone down to 1-3 days. Housekeeping only a couple days a week for the few people staying. I have 14 shifts instead of 28 for 6 shuttle drivers, 14 shifts for 5 front desk, with me being required to take some of their shifts since there is no way to rationalize me being there at the same time as them, but having to complete higher level tasks. Malls are 80% closed, stores and restaurants slowly closing down. There is absolutely no way to live in this expensive area on those hours. $1000 bailout doesn’t touch average rent, much less other bills. Sh—ts bad.

Edit: I’ll add on. Restaurant is closed. Chef, cooks, dishwashers, bartenders, servers have zero hours. Training is cancelled. All our new hires to prepare for busy season are cut. If you don’t have a different job (you won’t), by the time we need you, we’ll bring you back. Sales is furloughed. There is no one really for them to sell to. Banquets is dead. One of the most profitable semi-line level jobs in this area. I know people who work hard for a handful of big convention hotels and clear 120k. No banquets. Anywhere. I will say ownership has taken two actions other hotels in the area are not. You can use PTO, if you have it. Unfortunately, most of my employees only have a couple days worth. They will pay your employee cost of insurance if you have zero hours. This is huge. Last recession people with 1-2 days had their entire paycheck go to benefit costs, or even ended up owing the company money when they came back. Imagine finally having hours and $1000 going to back pay your benefits.”—greensypoop

“I was laid off indefinitely from 2 different hourly paying line cooking jobs on Monday (~50hrs combined/week) I helped clean out one of the restaurants Wednesday. We discarded a lot of stuff. I helped clean out all of the coolers and throw away A LOT of prepped food that people didn’t/couldn’t take home. Employees we’re encouraged to take what they wanted; produce, dairy, meat etc. The place is almost completely empty, it’s surreal. My spouse was laid off indefinitely Wednesday. She manages a restaurant and is salaried w/ benefits (~50hrs/week). She was told that management will not be paid until the place reopens. Our family currently has no work or income. We have a young child. These are very uncertain times.

Edit/Update: We are healthy and staying happy; lots of extra time to play with the kiddo 😉 We have food, water and other saved resources. We are exploring unemployment insurance and a couple of other options. Thanks for all of the love, this story could be the same for millions right now. Take care of your family and neighbors, try to spend and shop local. We get past this together!”—lzrkennyloggins

“I worked at Hyatt. I was hired as an intern fresh out of college for a year. Most of Hyatt’s Interns were actually internationals from Europe. Hyatt paid us minimum wage which is crazy once you learn how expensive NYC is. 2 months ago they recently hired a guy from the Netherlands and just 2 weeks ago another girl also from the Netherlands have just moved to NYC for this internship and had moved to her apartment just last week. 2 days ago HR called us for a meeting and said effective Monday we were no longer employed by Hyatt. They refused to pay us any of our sick or personal days which I had 7 days worth. For the interns that have recently moved to NYC HR basically said you’re on your own not our problem nothing we can do to help. SOL.

Being laid off is one thing but having the HR director tell us that they were not intending in paying any of our sick days, or personal days was a slap in the face & a massive dick move. I had intended to work till Saturday which was my last scheduled day. Since they were not paying my sick days I just called off my last 3 days so I can at least get 3 sick days paid. Hyatt’s saying is “we care for people so they can be their best” They really showed their true colors and I would never work for Hyatt or stay in any of their property for as long as I live. Edit: didn’t expect this to blow up. Just a few things to mention. I’m not trying to cause a riot of any sort. I’m getting paid my accrued vacation only. As some have mentioned, NY doesnt require for sick days to be paid so I’ve come to terms with that. Also this was just my experience. I’m not encouraging/ discouraging the use of Hyatt don’t let this post be the make it or break it on whether or not you stay at Hyatt. This was just me venting. For the people that have pm me asking if I’m okay thanks! But I will be alright. Good night everyone!”—iphon4s