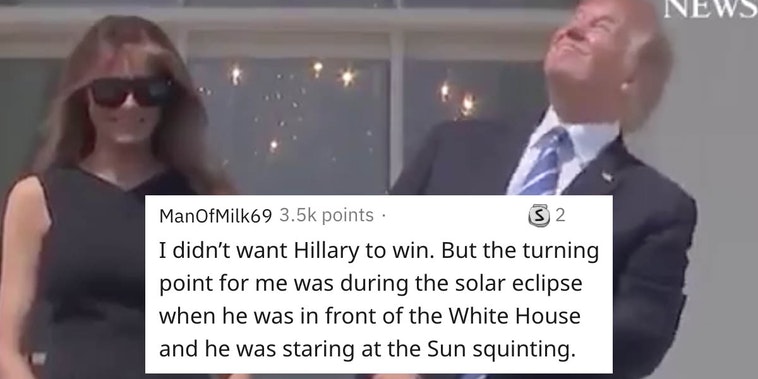 Trump voters in 2020 are fickle. Donald Trump managed to eke out a win in 2016 thanks to the support of people in states that four years prior voted for another party altogether. Now, another four years later, people are switching again. The question posed on r/AskReddit was simple. “Why did you support Trump in 2016 but not in 2020?” The answers were varied and complicated. I commend their honesty in this moment. We all make mistakes.

Here are the best answers to the question “Americans that voted for Trump in 2016 but will not be voting for him in 2020, what changed your mind?”

“The lies and the infantile Twitter temper tantrums. As someone who has friends in several foreign countries, the fact that they tell me that he is a World-wide laughingstock, and by extension, the USA is a joke.” –captainp42

“I didn’t want Hillary to win. But the turning point for me was during the solar eclipse when he was in front of the White House and he was staring at the Sun squinting.” –ManOfMilk69

“I cannot, in good faith, vote for anyone who says “my great and unmatched wisdom” seriously on Twitter.” –Admiralpoindexter

“I was ready to “shake up” America with someone who wasn’t in anyone elses political pockets. Turns out he is, but the pockets he is in isn’t even in the U.S.A. I’m pretty embarrassed about it, but honest because I definitely dont want to be seen as digging in my heels. Also, the whole handling of the Kurds recently was my “im out of this” moment.” –Teddyk123

“The answer is, I never liked him. When he was chosen as the republican nominee, I decided he would be better than Hillary. I did have a weird hope that maybe he’d be really good somehow. Like he’d shake things up in a good way.

To sum it up, how he addresses people. He only ever talks like an entitled a-hole. His tweets, his speeches, etc. they’re always just him praising himself or making it seem like he’s more liked than he is.” –king063

“Pretty much right after that election, I went through a lot of life changing personal growth. By the end of 2016, I was already regretting voting for him, and since that time, my views on the world have changed immensely.

Me then: Christian (born, raised, current but doubting), conservative values, in the military, single, living in hometown.

Me now: Atheist, far more liberal values, done with the military, married to an immigrant, living in big city across the country.” –Libidomy94

“The problem is the fact that his business-first laws and regulations just keep big greedy corporations alive and not real businesses. What we really need to help our economy is someone who truly understands a life at the bottom. We need another peanut farmer president.” –hemprope00

“I voted for him while I was in the military. But the Christmas after the election, I went home to Kentucky. I was dating a woman back there said “I prayed to the good Lord to give us a true religious leader and he gave us Trump. I feel the world is now saved!”. But that wasn’t the end of it. A few months down the road after we broke up and during the time Trump made it to where some citizens weren’t allowed to travel to some middle eastern countries, she admitted that she would shoot an innocent Iraqi child just to save America. Then I noticed a lot of people there around that area were just like that and still are today.

And now I see nothing but hate and bigotry coming from him and I lost all respect for him and the people who follow him. I lost a lot of friends and family because of him. I live in El Paso TX and there are 22 people dead because some stupid kid followed Trump’s hateful comments.” –hellbilly69101

“I was raised Republican and even though I was not a big trump fan I thought his policies would be better than anything Hillary was running on.

I went to school for political science and as I learned more about the political parties and their stances I started to realize I stood more with democratic views than Republicans. I followed the news as I studied and found that almost every headline that involved trump made me furious. Not only was he in my opinion taking the wrong side in most situations, he was presenting himself in a way that presidents should never present themselves. It’s clear Trump thinks he can do no wrong, and can win any fight without true rhetoric, but with childish insults. Politics in my opinion have no place for childish insults and extreme partisanship, but instead should be a chance for the prevailing ideas to drive policy.

No matter who the democratic candidate is in 2020, they have my vote. I made the mistake of voting trump in 2016 and will not make that mistake again.

Bonus reason I won’t vote for Trump: He is so pompous that he has admitted to his wrong doings in the Ukraine/impeachment scandal and clearly believes he has done no wrong. He has no regard for law and order, and as such has no regard for what is right for the American people.” –dank_bungalow

“Honestly, it was my first election, and I was dumb.

How dumb? I voted the way my dad did and then I justified it.

I’ve since done independent research and found other candidates that have views more similar to my actual views and ones that I like that I never knew existed before.” –Real_Srossics

“His support of the Saudi government. The man basically is supporting genocide.” –Reece1492

“My view of him changed during/right after the government shutdown last year. I never particularly liked him, but i assumed he couldnt possibly be that bad. And that he would have lots of educated and unknowable advisors around him to help curve the worse of him.

I started doing alot of research after seeing a shocking tweet he put out about being anti vax. And i was shocked by what i found. I usually avoided or did little research into what the media and news were saying about him. After all, in the world of fake news, how can you trust any of it?” –VC_Wolffe

“I was 18 and didn’t understand anything and was just listening to my conservative parents. Pretty much my only reason I voted for him was because “Hillary bad.”

I still don’t understand anything about politics, but I understand things a little more than I did when I was 18. At this point, I actually try to form my own opinion rather than having people tell me.” –mariiicarooo

“I graduated high school and went to college. Earthshatteringly changed my views. I left the conservative media circle jerk and actually was able to see the full picture for the first time in my life, not the cherry picked statistics affluent repubs want you to see.” –Dr_Fish_99

“I voted for Carson in the primaries. An intelligent surgeon that seemed like he had good intentions. Just like everyone else in this thread that voted for trump I thought he’d be able to do wonders for the economy based on his business background. The guy turned out to be a moron. Following his twitter account is a nightmare, he’s a terrible representative of our country. The Stock market is at an all time high and I got a bigger tax return this year than I ever have, but I’m voting democrat this next election. Spending money on walls and shit is crazy. Having Ukraine mess interfere with our election is crazy. Being bffs with Putin and Xio is crazy. In my eyes, trump became the symbol for hate. I royally fucked up with my vote.” –xSoulGangsterx

“I had genuine optimism that he would get a solid team around him and make improvements without companies in his back pocket. I didn’t expect all the fraternization with other countries, his extreme lack of tact once he was in position (like I said, optimistic), and just being a terrible representative of the nation.

Now I’ve watched Trump ruin his name forever, drag down so many marginalized people, and be a complete dunce. His disrespect for women, immigrants, and other politicians, especially once in office, is really why I’m prepared to vote him out this time around.” –workerbee69

“I was honestly hoping for something different with him. I can understand being rough around the edges, but my expectation as someone that has run many businesses, he would want to streamline the government as much as possible, making it more efficient and smaller. While there has been some positive movement in that direction, there has been plenty of unneeded regulation added. In addition, federal spending is out of control, something that no private business owner should be OK with.” –KosherCowboy0932

“I thought a war with Russia was going to be coming to a boil with Hillary as president. And while, I didn’t like both candidates, I didn’t want war. Thought Trump would mellow a bit after the campaign. Looking back now, sure shows me what I knew.” –DetectiveDamnChan

“He took us out of a lot of agreements that forced us and other countries to operate and consider the environment. I want to have a planet to pass down to my children and the next ten generations after that.” –SpartanLife1

“Because he changed that employees can’t claim things they HAVE TO buy for work off on their taxes but EMPLOYERS can! That directly pissed me off when I filed my taxes.” –CowPuncher3000

More stuff about Trump on today of all days: