Be warned: the following contains a story about boobs. It seems some people find that offensive, based on the reaction to Redditor u/fishtaco69‘s tale, titled, “TIFU by putting “I Voted” stickers on my boobies.”

TIFU stands for “Today I F—ked Up,” and it’s a subreddit where people share stories about the time they made a mistake, either to warn others or to get Internet cred for doing something totally stupid, like shaving their whole butt. Why people want to be famous for stuff like that I don’t know, but this woman actually does seem to be trying to stop people from making her mistake.

She starts by saying it’s her first time voting (way to go!) and when she dropped off her ballot she got excited to see the “I Voted” stickers at the polls. This is where things went wrong:

I’m thinking about how nice it is that I did my part as a citizen, and oooohhh stickers! I took more than one and I noticed the large circle was about the same size as my areolas. The wheels in my head start to turn. I get home and strip all my clothes off. I’m feeling quite patriotic as I censor my teets with these sticky knockoff nipple covers.

While my husband is on the phone, I lift up my bra to show off my work. He makes a face. I know this face. I’m reeling him in. I push a little further. I squeeze them together, wiggle them a little, and do whatever necessary to get the D. He hangs up the phone and gives in to my tempting ways.

She says they started messing around a bit and it seemed time to free the nipple. But when she started to try and get them off, it hurt like hell:

That sh—t is STUCK on there. Trying to keep a brave face, I lift it again, but the sticker has latched on to my nipples like a baby. Should I rip it off like a bandaid? Sweet lady liberty NO! Ladies, do not rip anything off your nipples. Actually, take my advice and don’t be stupid enough to put stickers on your nips in the first place. I end up hopping in a hot shower praying they come off. One of them rips in the middle down my nipple. When I pull on both, my nipple is stretch sideways almost bringing me to tears. After taking the time to slowly lift it, it finally comes off. I will now treat them extra special and put oil on them or something. Never again.

Hey, thanks for the warning. I don’t think I’ve ever, ever considered putting I Voted stickers on my bare boobs, but now I definitely won’t. OP included some edits for the doubters and haters:

The story has been upvoted a lot on Reddit but also reported a lot, so much so that the mods even posted a screenshot of the complaints. Most people seem to think it’s fake: 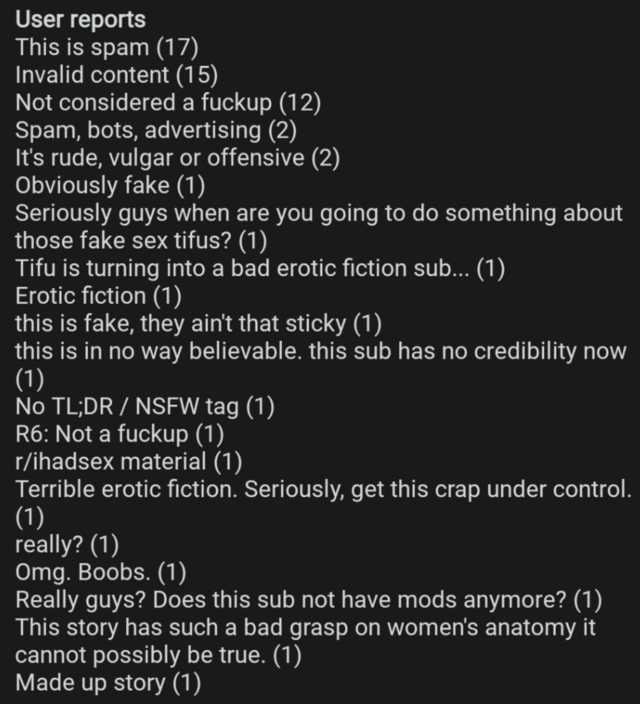 But a lot of people are just enjoying themselves because life is short and democracy needs a lighthearted moment: 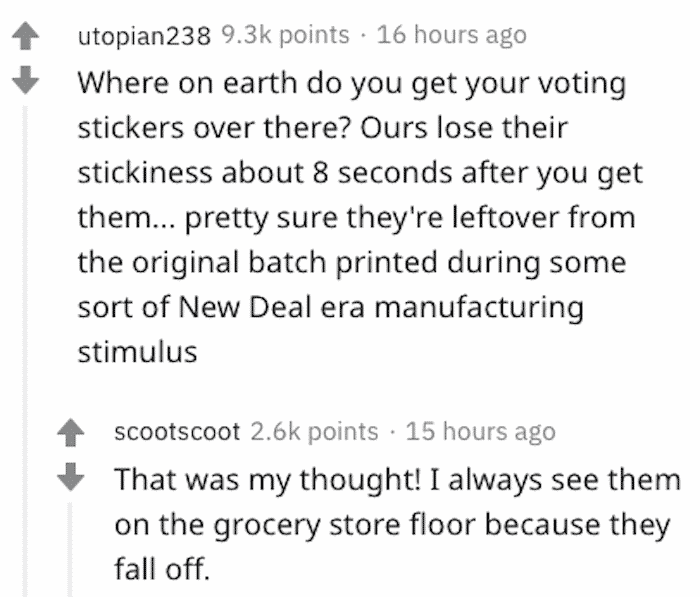 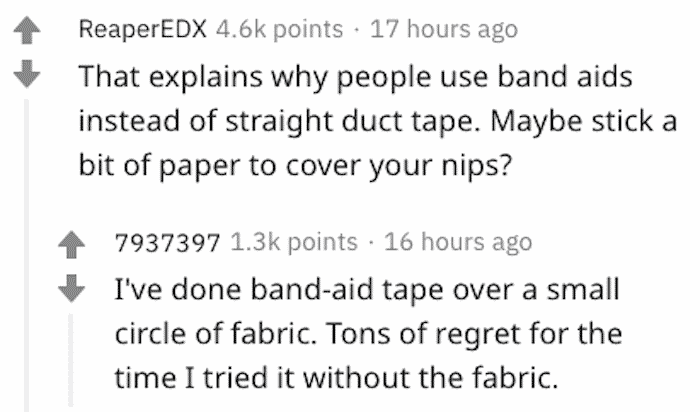 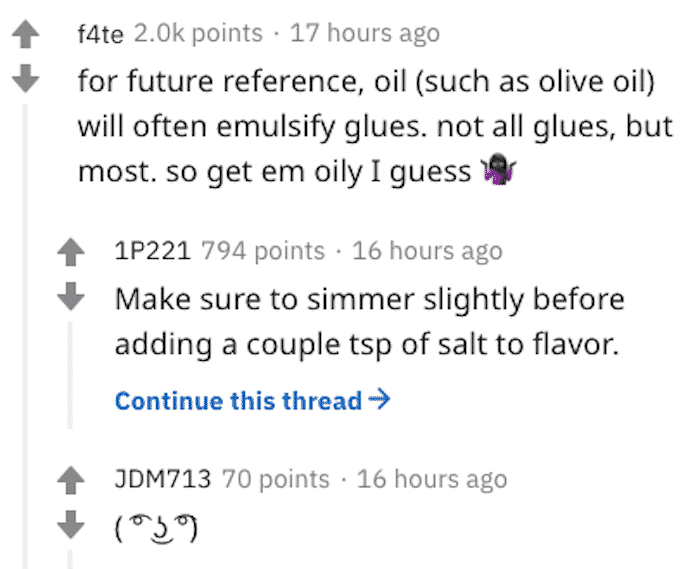 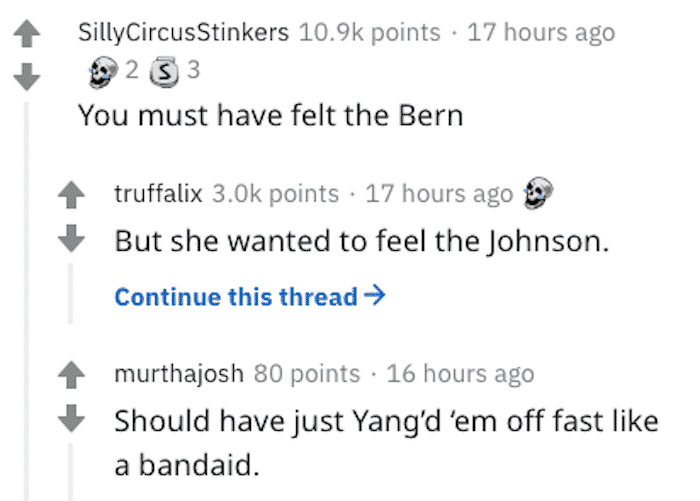 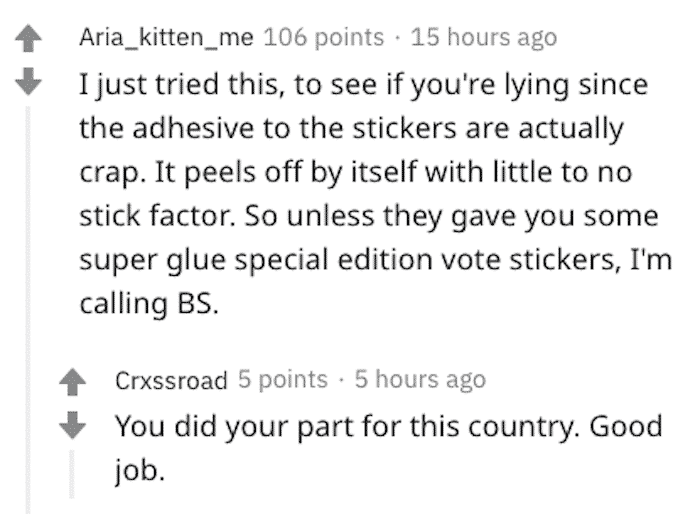 The OP also updated with some more info if you want a visual (and yet another earning to people who want to try this now, for some reason):

If people are so adamant on trying this out, fine. Don’t say I didn’t warn you. I used those big red circular stickers in Utah. The O in voted has an image of the state of Utah around it and a checkmark in a box on the bottom. I kept it on for like 20 minutes total and put them on when they were soft and unaroused. I’m not sure how true this is, but i’m pretty sure women have more sensitive, pliable nipples than men. At least that’s the case for my husband and I. Maybe I just have very sensitive nipples. I don’t know. So I don’t think this would work for everyone. Anyways, enjoy. You’ve learned nothing.