Saying goodbye to a beloved pet is an incredibly difficult thing to do, and it often takes people awhile to come to terms with the decision to put their animal down. Sometimes they admittedly take too long—but this story on r/AmITheA**hole from u/TGxNihilum is the opposite of that. They didn’t even know their cat was sick before they knew their cat was dead.

“AITA for not speaking to my parents again after they put my cat down?” they asked.

The OP started by saying they’re 28 and live about 10 mins from the vet, but currently have two herniated disks. They thought their cat had a cold, because his ears were warm and he wasn’t eating as much as usual. he was also due for shots. The OP asked their parents to bring the cat to the vet, which they of course paid for. Then this happened:

I called them after an hour and asked how things were going and my father told me everything was good and he had a little fever.

Fast forward another hour, they come back and let themselves in and I open the door to my mother sobbing and my father slinking in the corner. Turns out the vet found a large mass on his Kidney and suspected it was stage 3-4 cancer. So my parents, without calling me, had him put down to “spare my feelings”. I told them both to leave and that I never wanted to speak to them again. That it wasn’t their decision to make and they should have called and told me the situation so I could at the very least say good bye and be with him. That by failing to tell me, they stole an opportunity for any closure I could have. I raised that cat from a feral kitten with his mother and his brother from the time he had his eye’s open. He was only 10.

I’m equally heart broken and furious and they can’t seem to understand why. They proceeded to berate and belittle me, going as far as to say I wasn’t sad, just angry and that I was: “ruining a beautiful and tragic moment” and that it was my fault because I didn’t go with them.

The OP wants to know if they are being a jerk to their parents. As an avid cat lover, I personally say, ABSOLUTELY NOT. And the commenters agree with me: 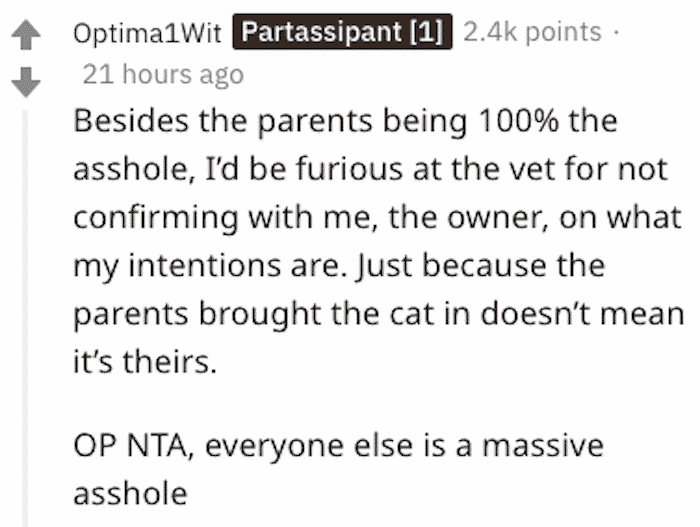 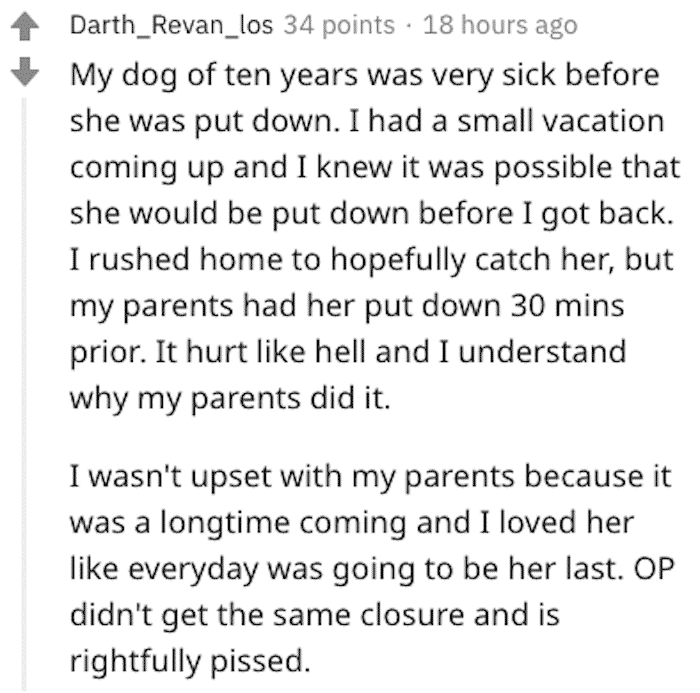 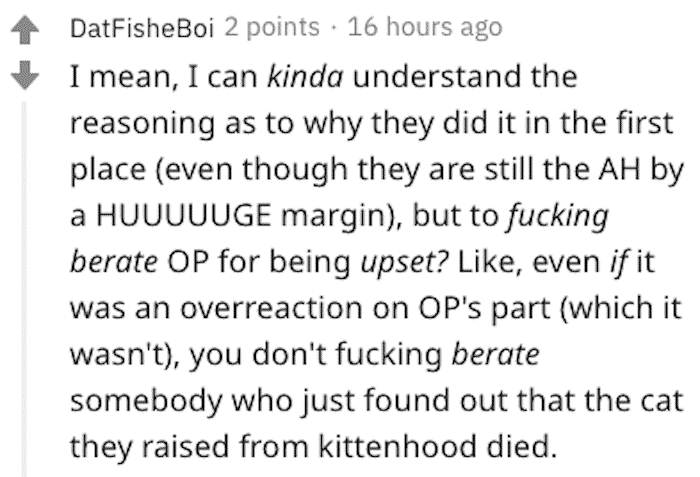 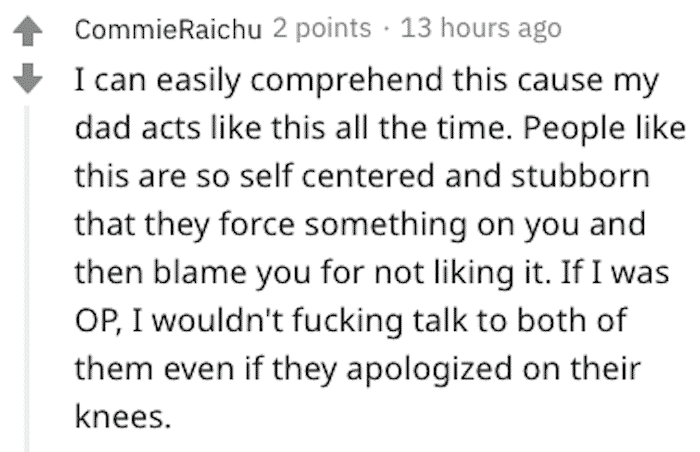 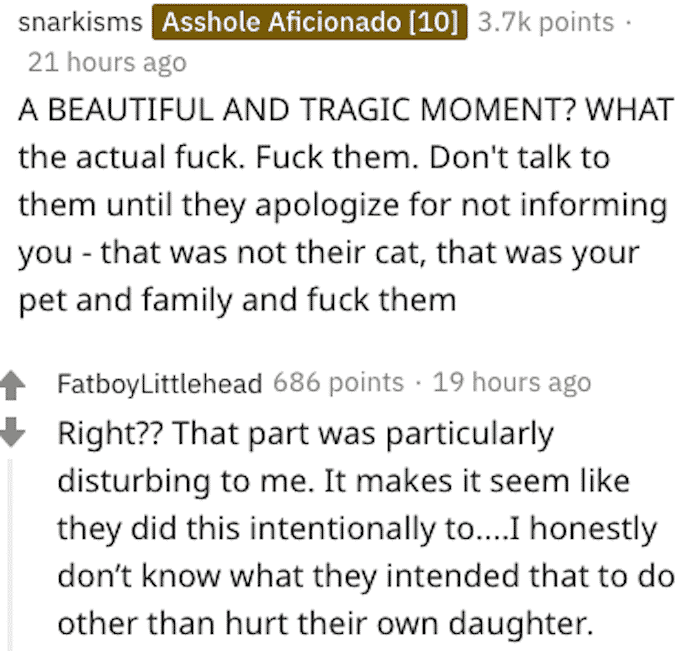 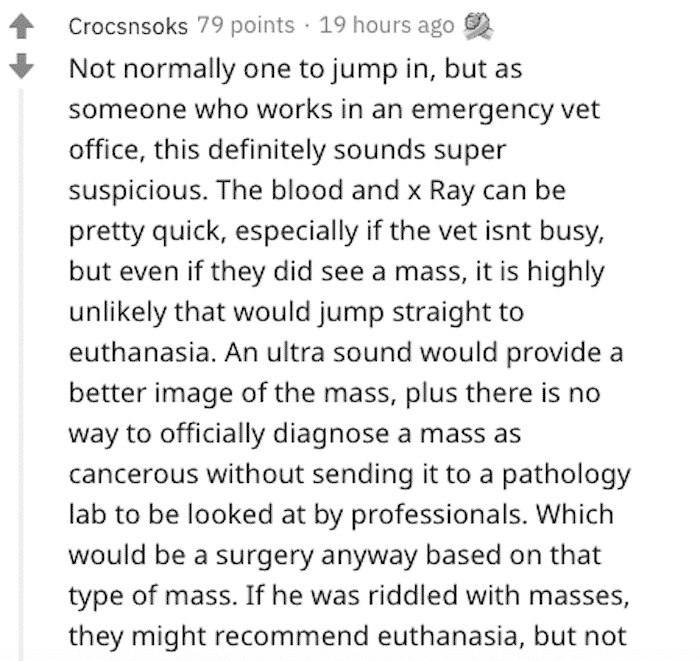 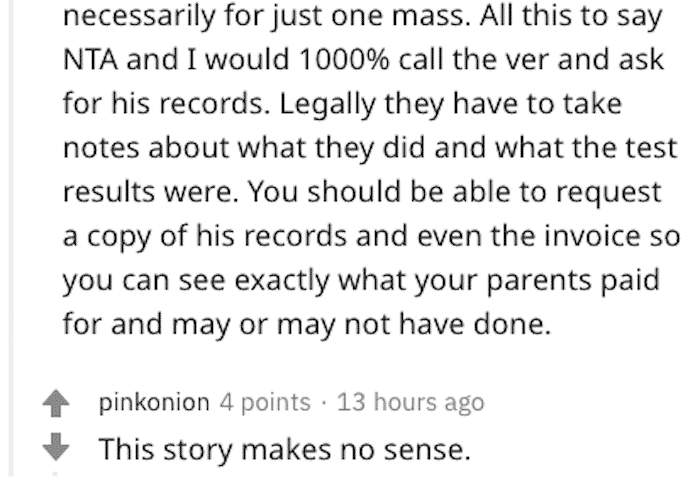 It’s hard to maintain a no-contact policy with family members, especially parents. I’d bet that eventually the OP might come around and forgive. But I also bet they’ll never forget. A breach of trust like that can’t be repaired.