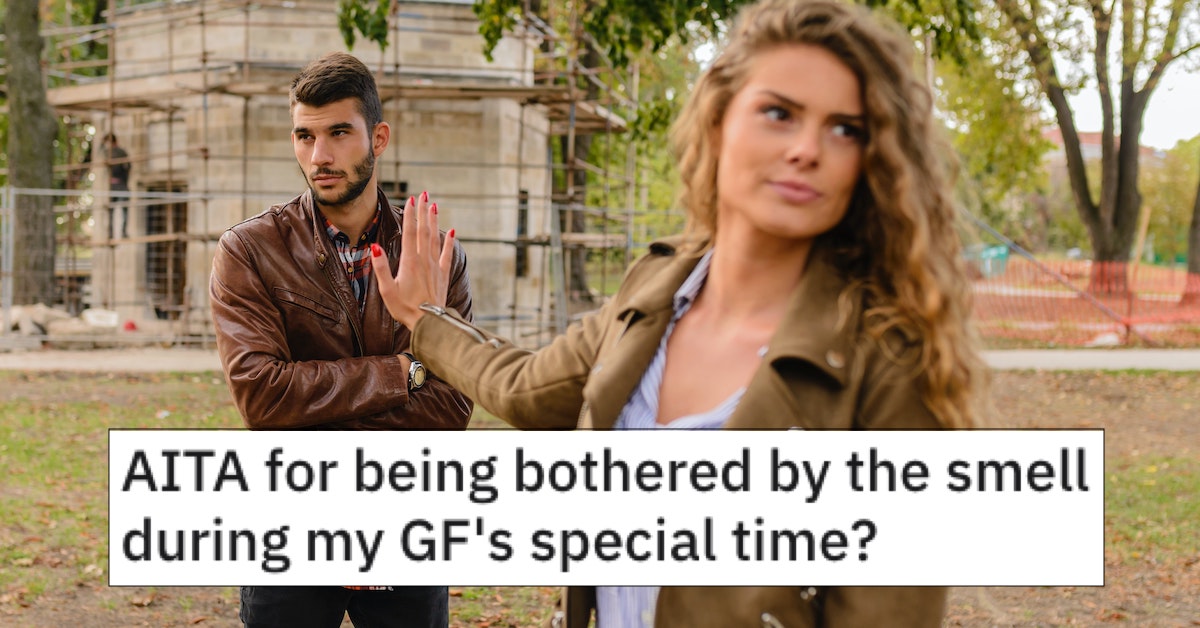 If you’ve never had a menstrual cycle and never will, here’s a little cheat sheet when you want to tell someone how to deal with theirs: don’t. It’s an involuntary bodily function, and if you have trouble understanding that, do some reading and keep your distance from the issue aside from gentle support and offering to go pick up tampons and ice cream. I think if people stuck to this, there would be half as many fights in heterosexual relationships.

Though to be fair, I don’t know if anything could save the man in this story on r/AmItheA–hole, because he may be beyond redemption. He says he is 34, has a 25-year-old girlfriend, and a “very sensitive sense of smell especially to unpleasant odors.”

“I think I might be a super-smeller or something,” he writes.

This has led to an issue in the household where he says he can smell it in the bathroom when his girlfriend is having her “special time of the month” which is a euphemism I thought only great aunts used. He continues:

I understand that it is something that girls have to do but when she does it it leaves a bothersome odor in the bathroom that bothers me. It isn’t that she doesn’t keep herself clean. I never have to see anything gross or anything. But I can still smell it.

I tried talking to her about it nicely but she just got all upset and defensive about it even though I tried to say it as gently as I could, maybe because it was her special time of the month. She said that she can’t even smell anything but I can and it really grosses me out.

Later when finally calmed herself down I offered a very reasonable compromise. I asked if she could use the bathroom in the pool house during her special time. It wouldn’t really be that inconvenient for her. It is just outside across a small lawn, only about 20 feet away once you get outside. She got all mad again and said that if I didn’t like it I could use the pool house bathroom but I told her that that didn’t seem fair since I wasn’t the one stinking up the bathroom. Why should I be the one who has to go outside all the time?

She is still mad at me but i think she is being unfair. She doesn’t understand how much the smell bothers me. Some of our friends say that I am the AH though so now I’m not sure. 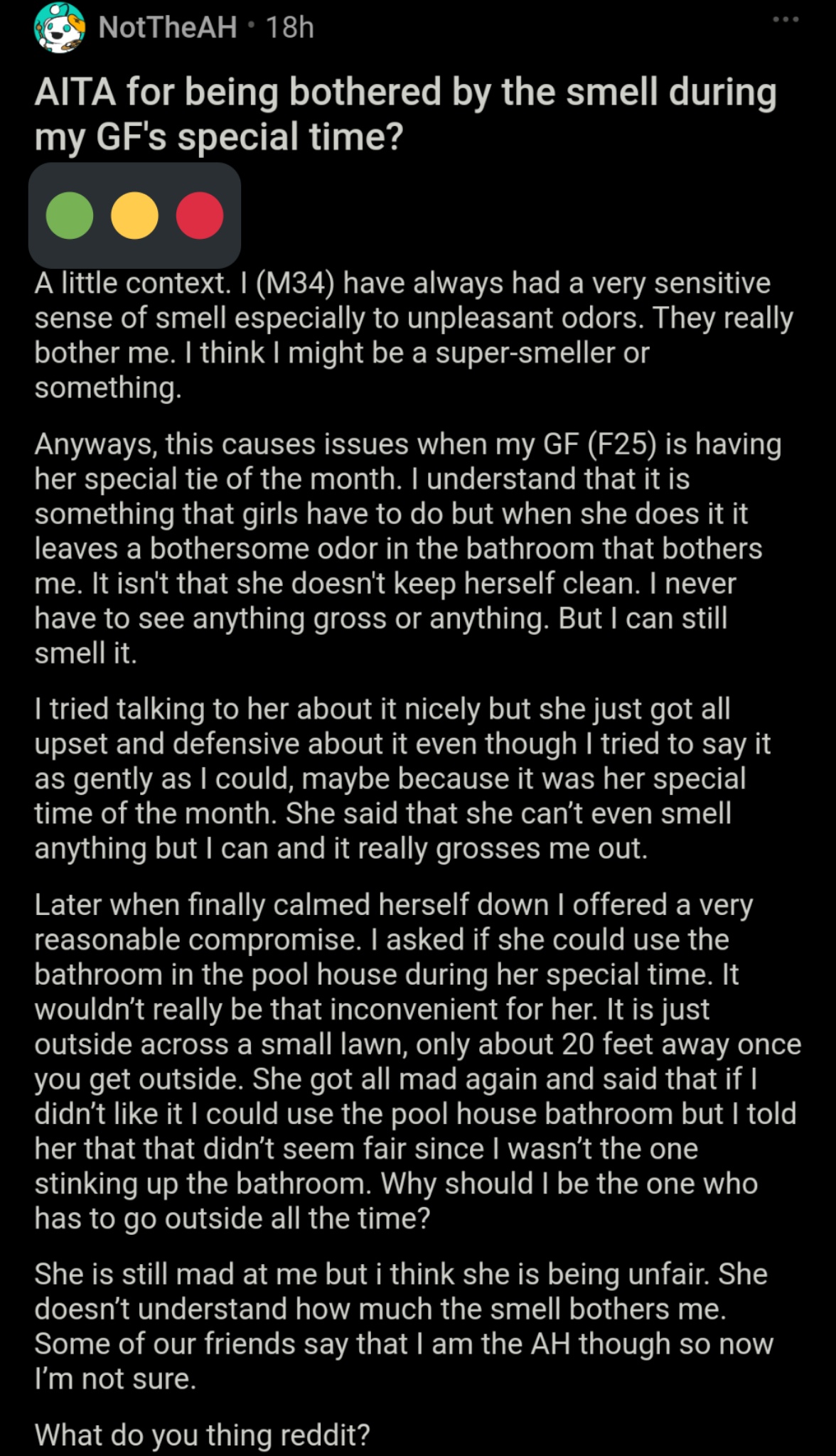 Are you the AH for trying to banish your girlfriend Red Tent-style over her monthly cycle? Like, absolutely, yes. But a lot of people also just thought he was a troll: 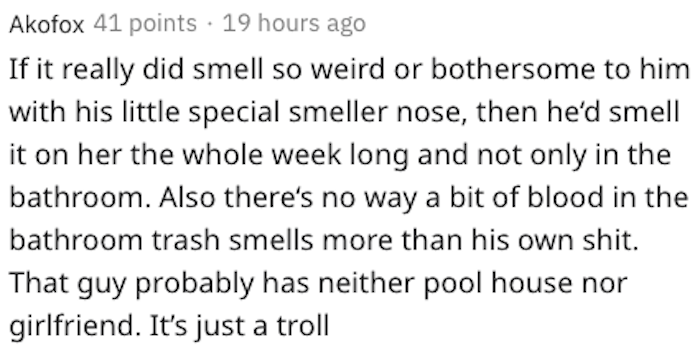 There were some people who took the question more seriously, and tried to explain in detail exactly why the OP is an a—hole: 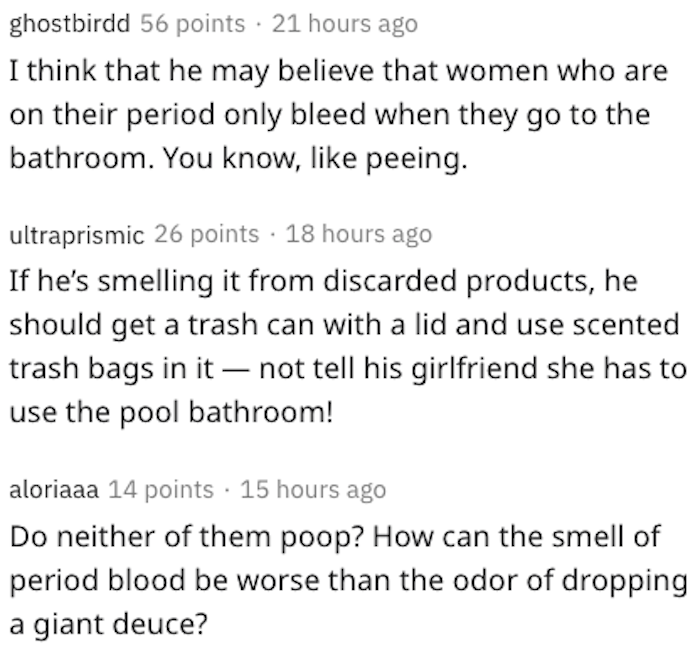 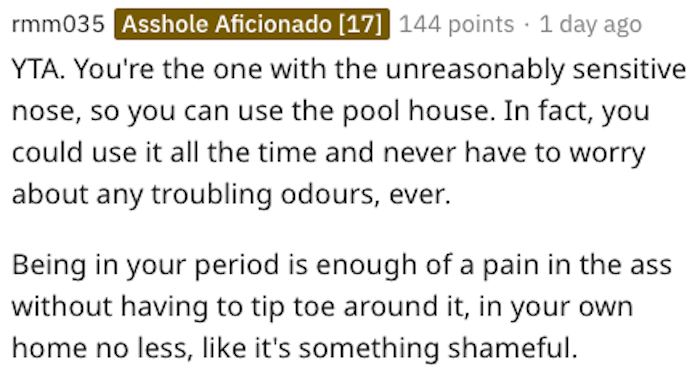 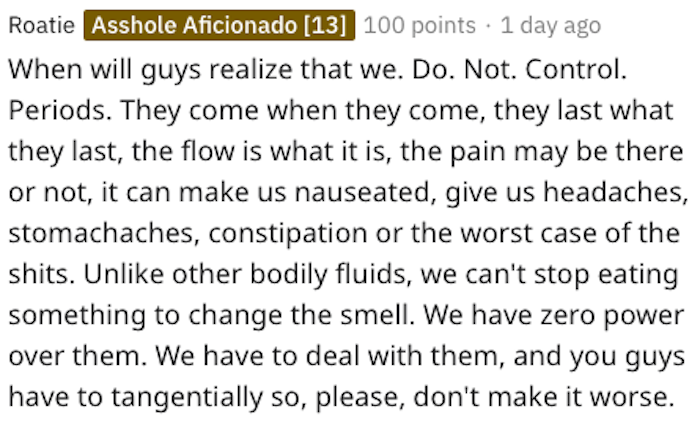 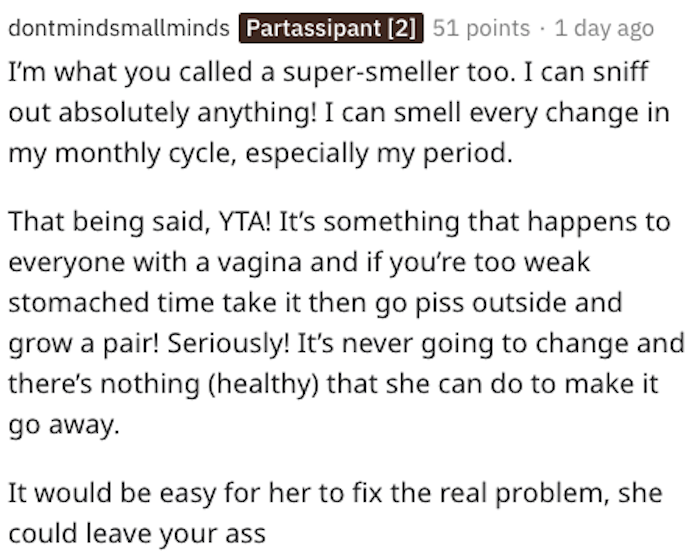 If this person is real, they should consider themselves lucky that a woman is dating them at all and that she hasn’t permanently moved into the pool house to get away from him.