On the subreddit r/ProRevenge, people share stories about getting even with someone who messed with them. Sometimes the stories are vindictive and unpleasant, but sometimes they’re…perfect. This story from u/BBQLunch comes pretty close.

He writes that he was working as a foreman on a construction site for a new house when this all went down.

The house is being built up a hill and all materials need to be carried up a footpath, but at the bottom of this path are two parking spots. The location is near a school and the OP says he’s often forced to ask parents to move their cars so he can load stuff in or out from those spots. On this day, he saw a woman sitting in her car in a parking spot when he got a call that the lumber truck he was expecting was a few minutes away.

I walk up to her car and politely let her know that she is parked in a no parking zone and we really need her to clear it to park a delivery truck. She scoffs at me and rudely states back, “I’ll just be a few minutes, and your truck isn’t here, take a chill pill dude.” Before I can respond, a giant lumber truck comes around the corner and I wave to him, and then gesture towards him to the woman in the car who has now put her window back up to ignore me. I put on my best customer service smile and wave at her through the window, she put it down halfway and angrily shouts “WHAT!” By now the truck has pulled up alongside her car and I politely ask her again, with a stronger tone of voice to move her vehicle, reminding her that she is illegally parked in a tow away zone. Then she gives me this wonderful idea, she says, “Can’t you guys just unload around me? Jesus, it’s not that hard.” 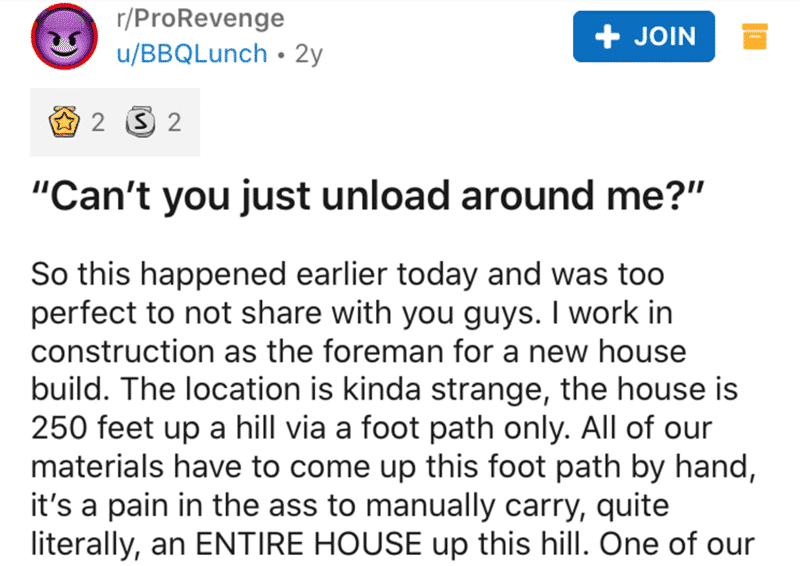 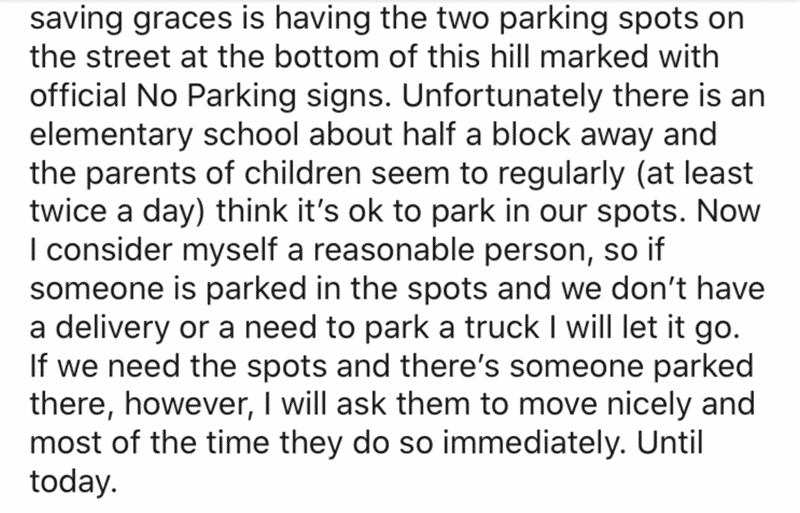 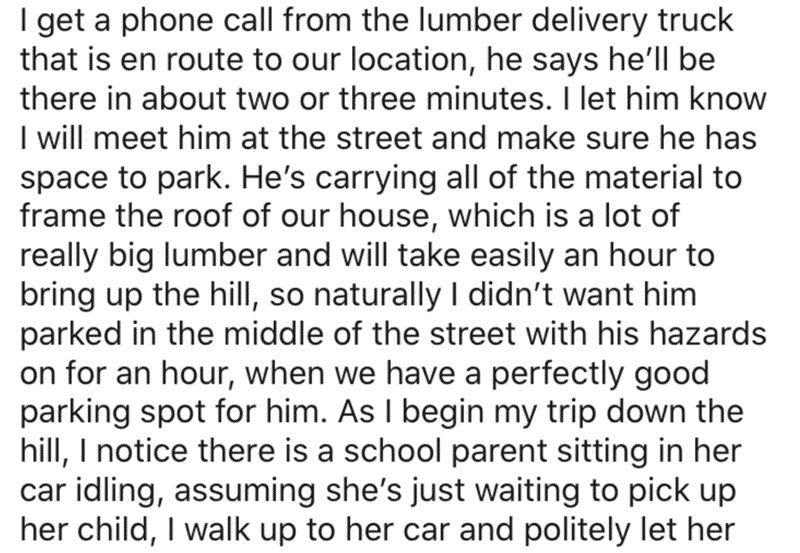 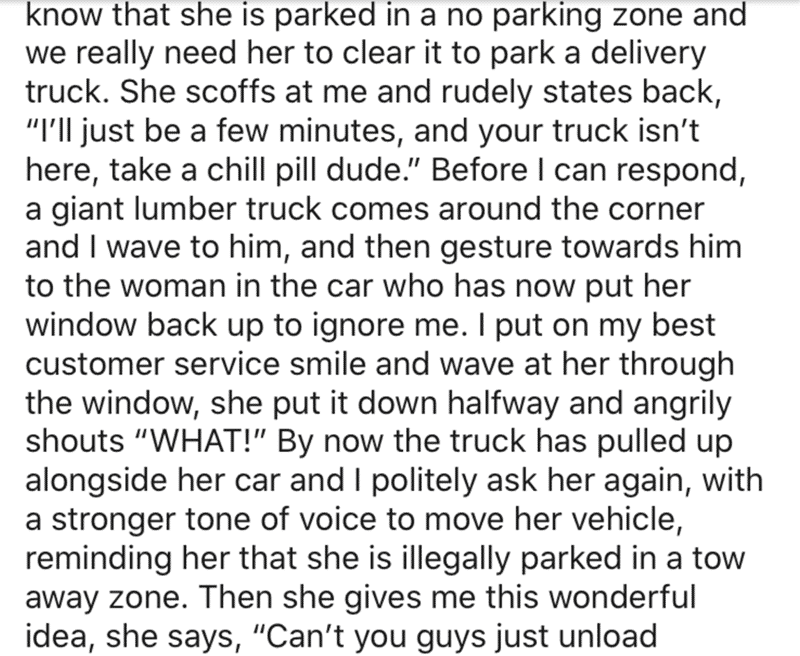 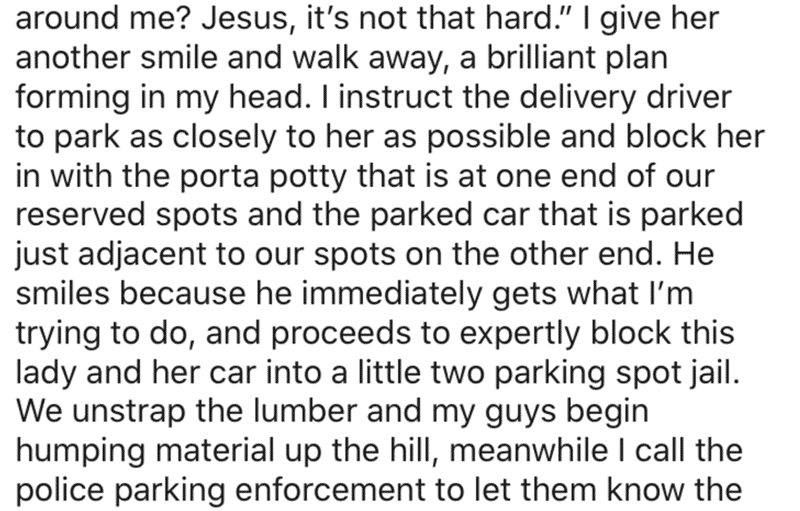 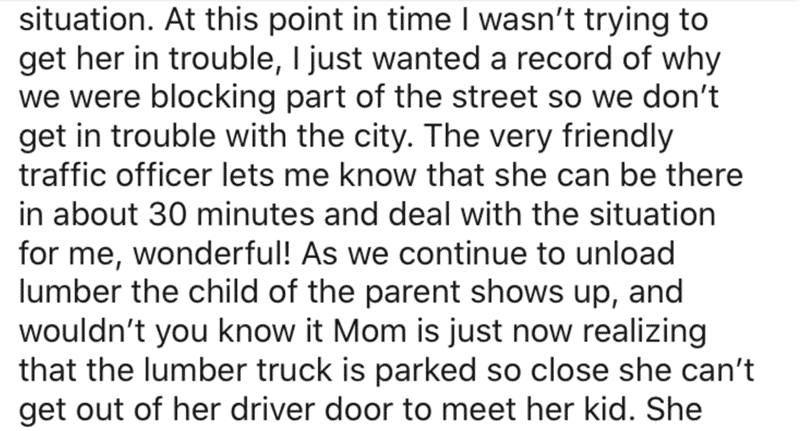 Famous last words. The OP colludes with the lumber truck driver, who pulls into the remaining spot too close to the woman’s car, basically blocking her in. He also calls the police, saying, “At this point in time I wasn’t trying to get her in trouble, I just wanted a record of why we were blocking part of the street so we don’t get in trouble with the city.”

The traffic officer says that they’ll be there in about 30 minutes. As this is happening, the lady’s kid shows up. She realizes she can’t get out of her own door, so she exits through the passenger side and helps her child inside. Then she realizes she can’t leave the parking spot.

She comes storming up to myself and the driver and states, “I’m in a big hurry, you need to move your damn truck right now so I can go.” Before I can respond the driver gets a grin on his face and says, “Ma’am in order to unload the lumber on the truck we had to unstrap it, and per our company policy I’m not allowed to move the truck with any unsecured load on it. Sorry.” This sends her into near aneurysm levels of blood pressure, meanwhile I can barely contain my laughter. “F—k your policy I have somewhere to be!” She barks back at him.

At that moment the traffic officer has arrived, but the woman can’t see them parking their vehicle behind the truck.

I just casually say, “Can’t you just pull out around it? It’s not that hard.” With the biggest sh—t eating grin I’ve ever had I watch as she realizes that I just used her line on her. “F—k you!” She yells, and storms back to her car and angrily clambers back in through the passenger door and into the drivers seat. At this point the officer is walking up to myself and the driver, before she can even introduce herself the Mom in the car slams it into reverse and stomps on the gas, crashing into our porta potty and knocking it over, and then throws the car into drive and tries to mount the curb and drive on the sidewalk. The officer, driver and I are staring in disbelief as she gets halfway over the curb and gets stuck. I can hear her screaming obscenities over the idling truck from inside her car. The officer promptly walks up to the door of the car and orders her out. My favorite part of the entire thing is watching her face go to shock as she realized she just did all of that in front of a police officer. She gets slapped in cuffs as the parking officer calls for a second unit and she is promptly sat on the very curb she tried to drive over. 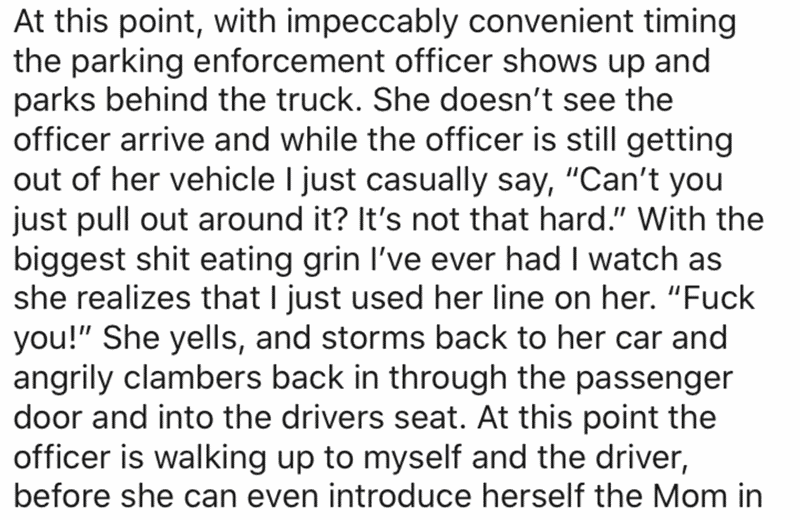 The woman tried to lie and say the OP never told her to move, unaware that the OP made the complaint ages ago to the unit that she’d refused his instruction. He claims that by the end the woman was arrested and charged with “Child Endangerment, (her kid was in the back of the car the whole time) Reckless Driving, Destruction of Property, (the porta potty) and Driving on a Suspended License.”

Her car was towed, she ended up in a cell, and her kid went home with their grandparents. The OP claims he never expected her to try and go around the lumber truck, but thinks “next time she’ll probably think twice about parking in a tow-away zone, if she ever gets a license again.” 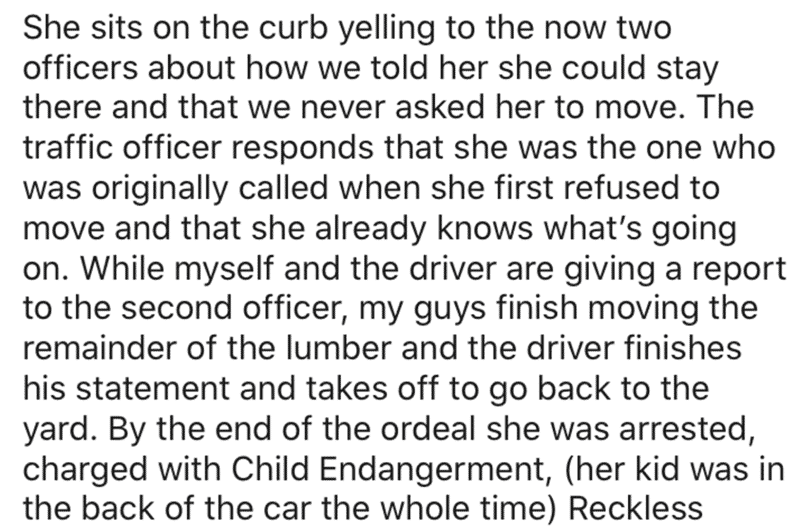 You know what this story made me think? That poor kid. I hope they’re all right.

It made most of the commenters think “F—K YEAH!” 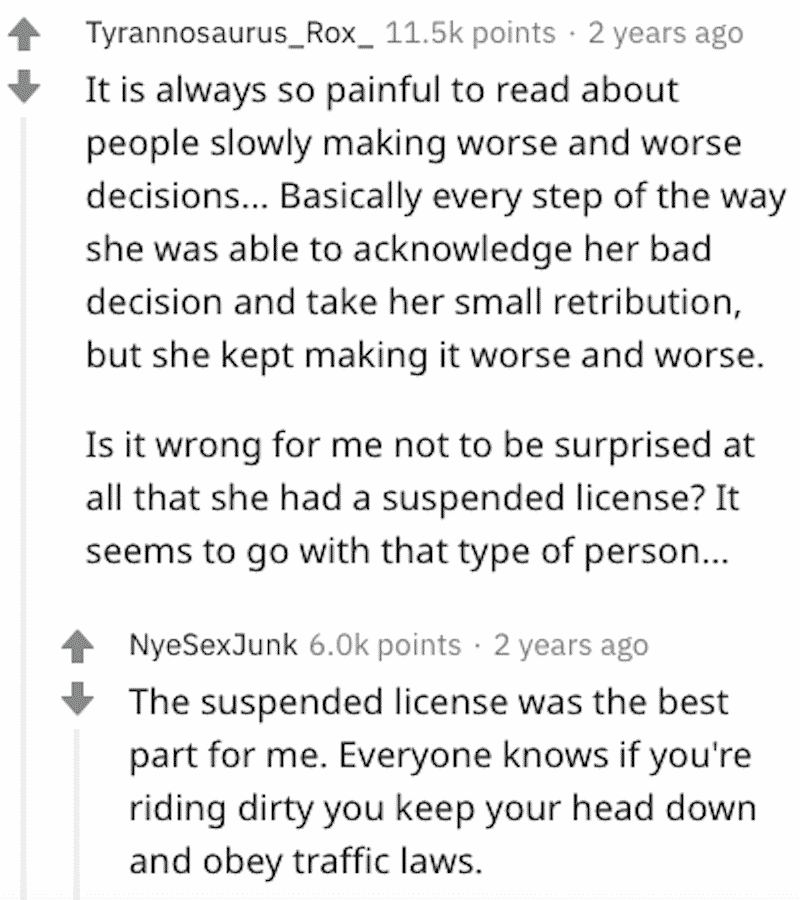 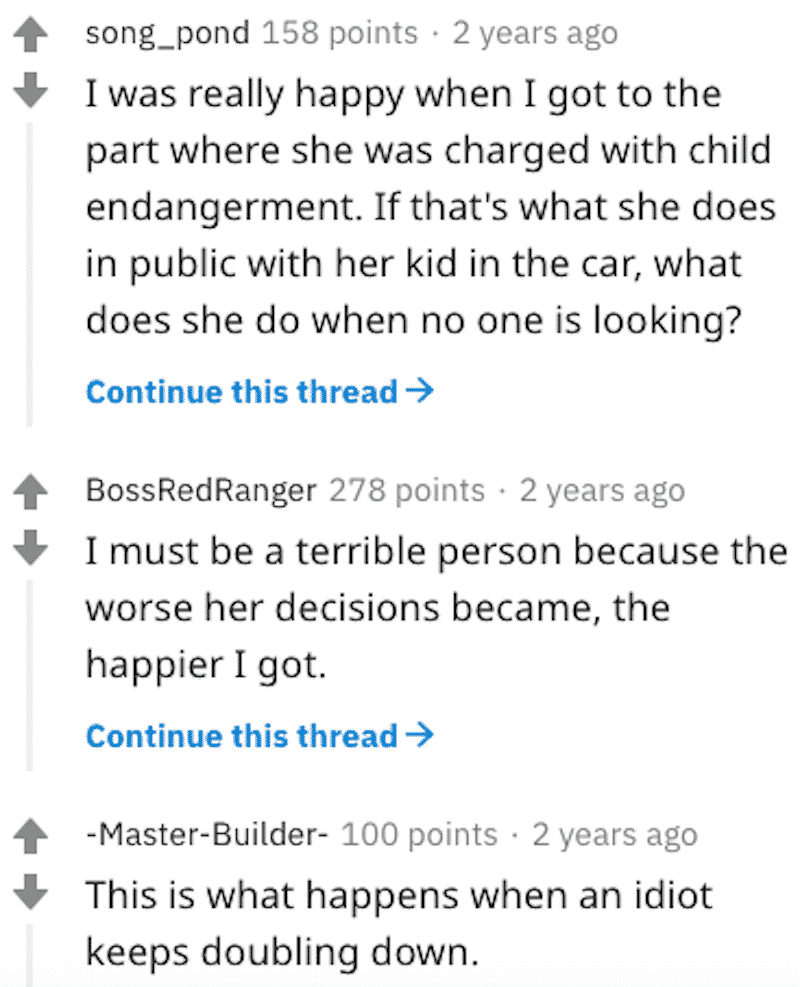 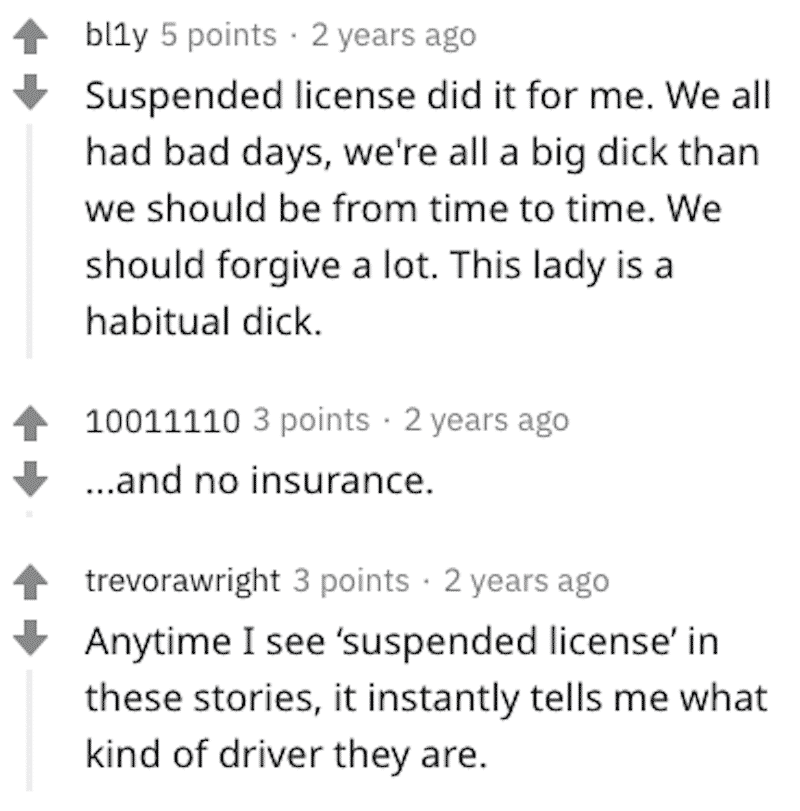 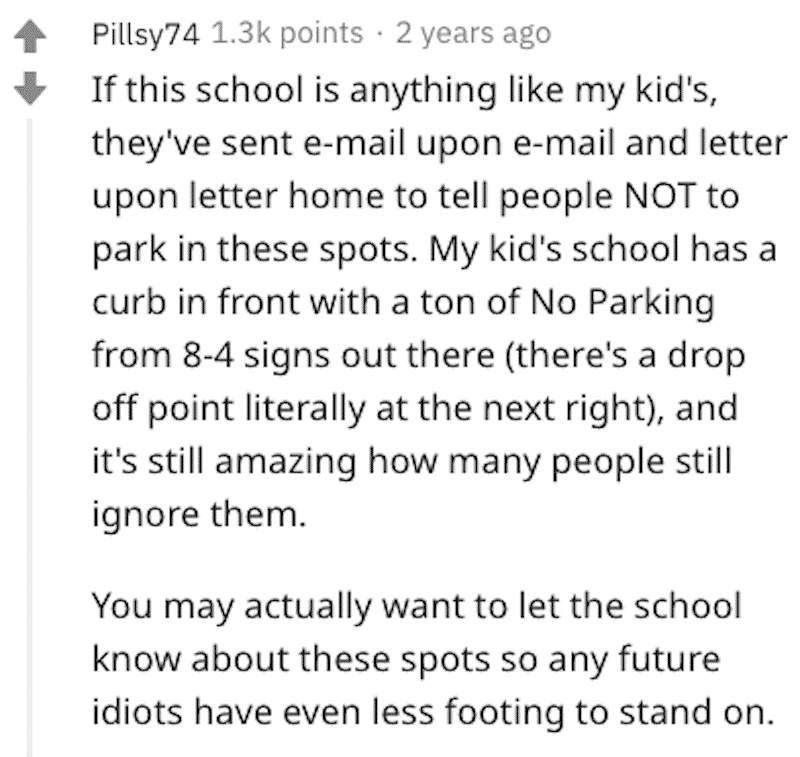 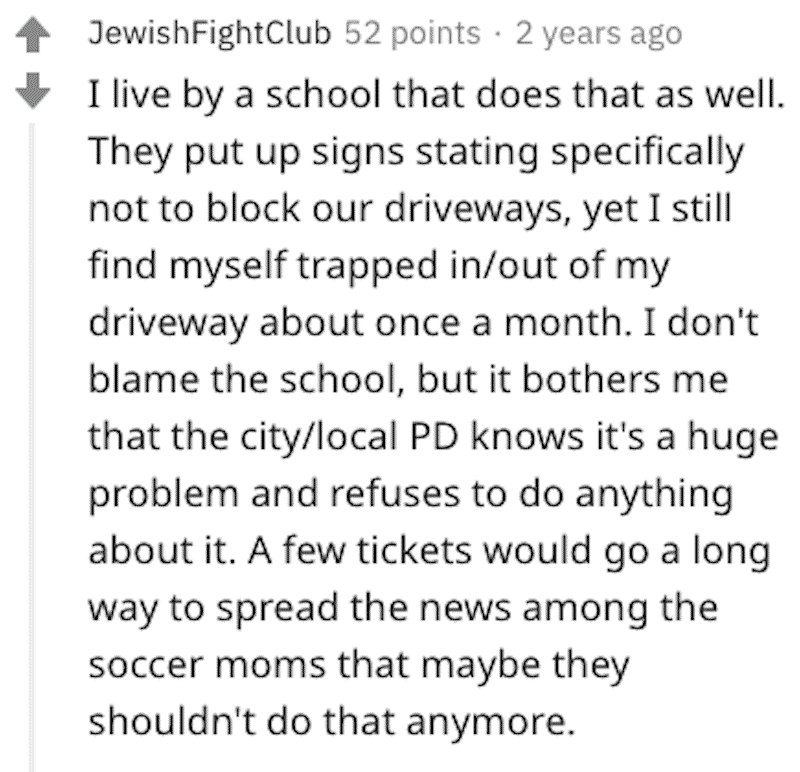 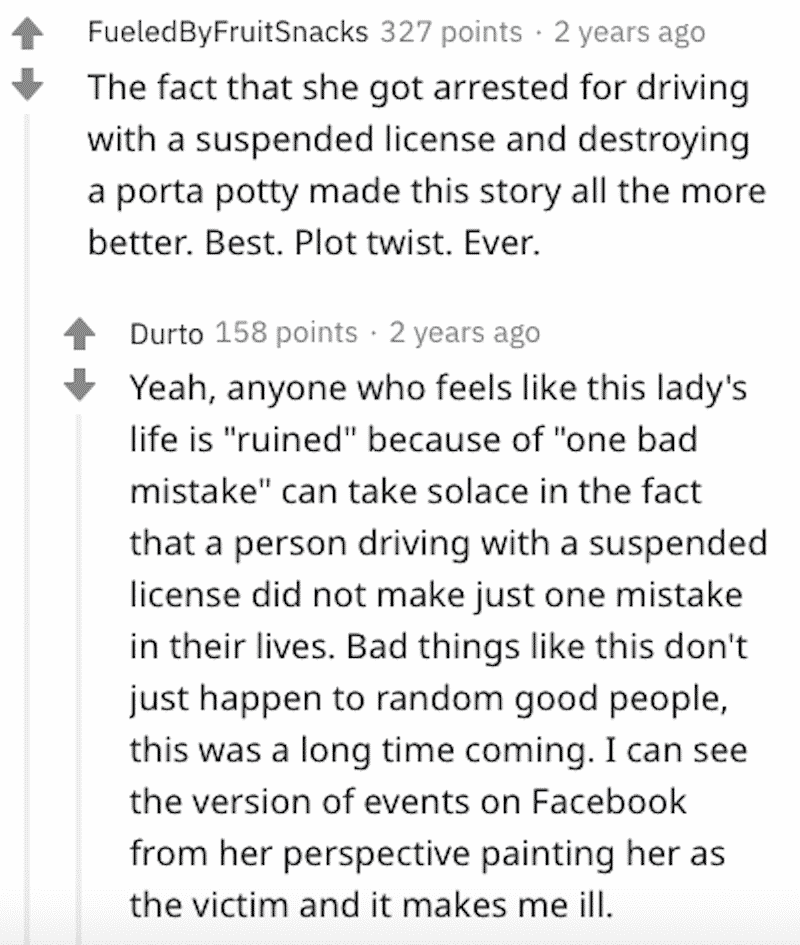 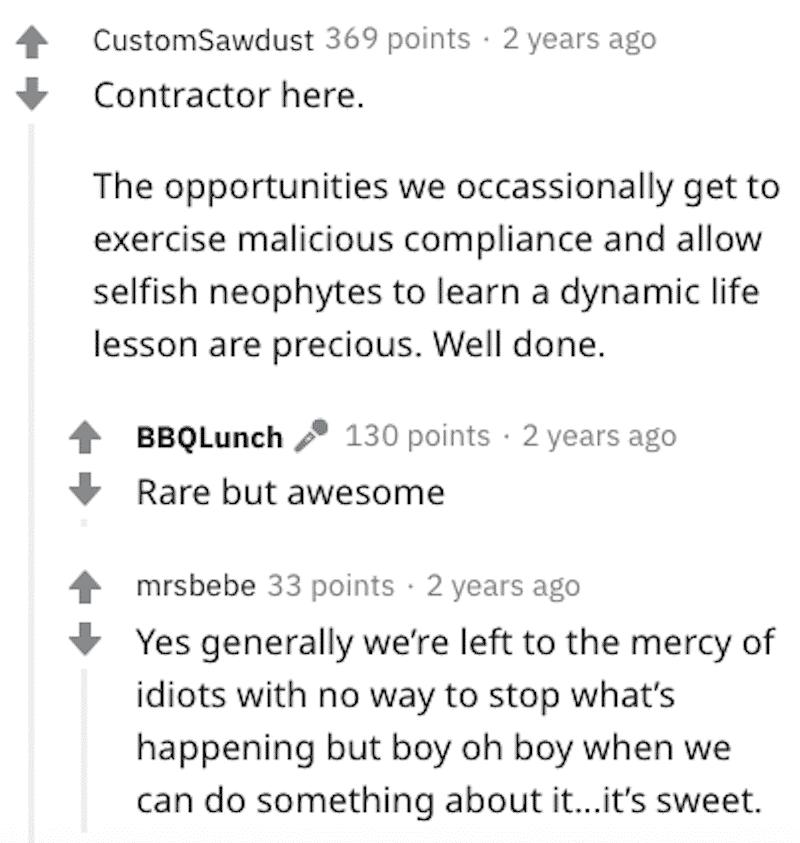 The lesson form all of this is pretty clear: even if you’ve gotten away with being rude to construction workers, breaking the law, and driving with a suspended license before, you might not this time. So don’t do it.