The stories on r/ProRevenge are always a mix. Sometimes the revenge seems really petty and often kind of misogynistic. I don’t go there a lot. But this one is basically a real-life soap opera, because of how cosmically aligned the bad guy’s comeuppance is in the end. It was written by u/AngelGuideIndi under the title “He Ruined My Sister’s Only Birth Experience So I Made Sure He’d NEVER Forget Her.”

There are a lot of people involved, so here’s the cast list:

Kinda my revenge, kinda my sisters, both of us really proud. This is gonna be long so TL;DR at bottom. Here’s our cast:

The story starts out with the OP saying her older sister Sara got pregnant by a guy named Paul when she was 22. The OP was only 14 at the time, so she didn’t have much power to intercede, but she says Paul was a douche to Sara as soon as her pregnancy started to have serious consequences for her health. 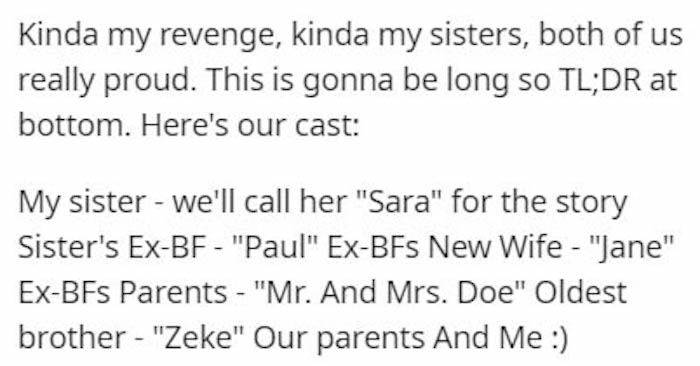 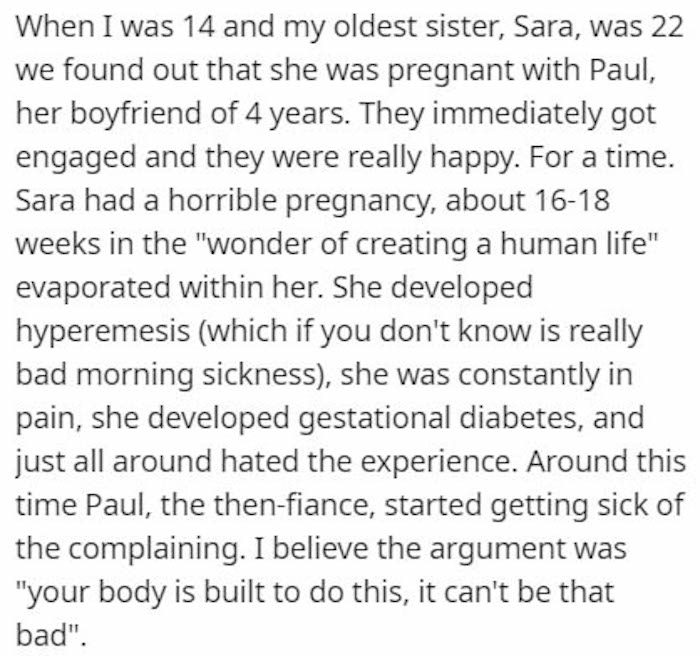 “She developed hyperemesis (which if you don’t know is really bad morning sickness), she was constantly in pain, she developed gestational diabetes, and just all around hated the experience. Around this time Paul, the then-fiance, started getting sick of the complaining. I believe the argument was ‘your body is built to do this, it can’t be that bad,'” they write.

Meanwhile, Sara was due around Valentine’s day, and Paul’s parents got it into their heads that the baby should be given a name to honor the holiday.

They told Sara, “Well if you name him Valentine or Valentino then that’ll make the day even more special to him!” Sara hated the idea. 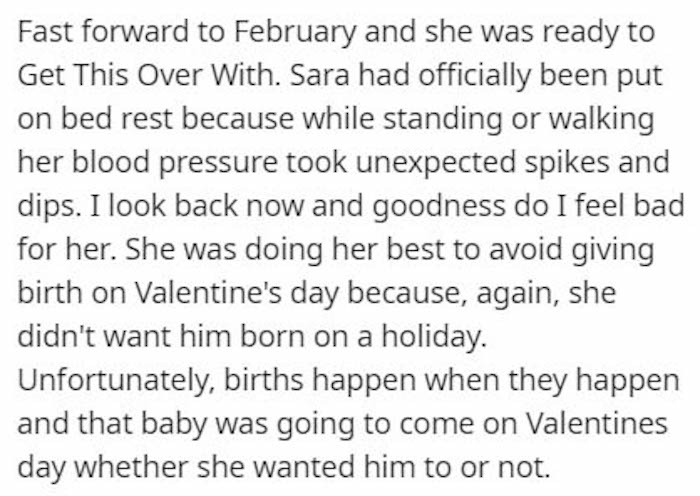 The baby boy was born on Valentine’s Day, and it was a long labor. Paul did not spend time with Sara in the delivery room. Because it was “gross.” 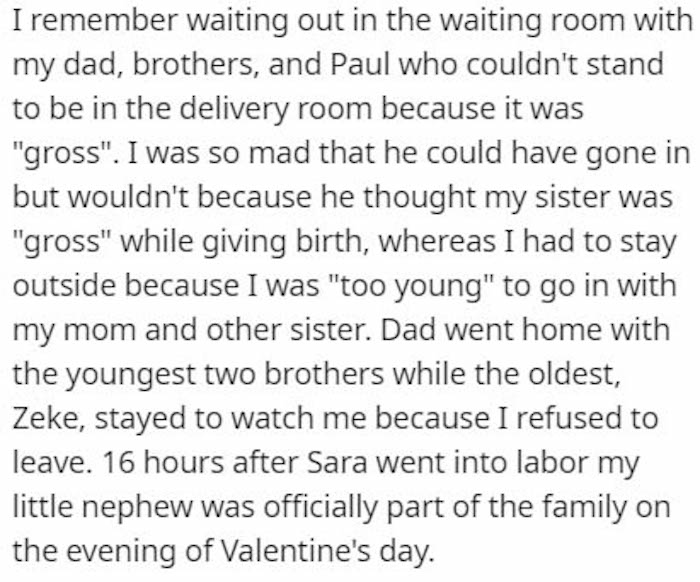 And thinks got pretty serious in there. Sara ended up having an emergency cesarean section and  the OP writes that doing the operation  the doctors “discovered that the back of her uterus (facing her spinal cord) had a very large and very severe (thankfully non-cancerous) tumor.”

That meant Sara had to go into immediate surgery instead of the post-birthing bliss of holding her baby and passing out. 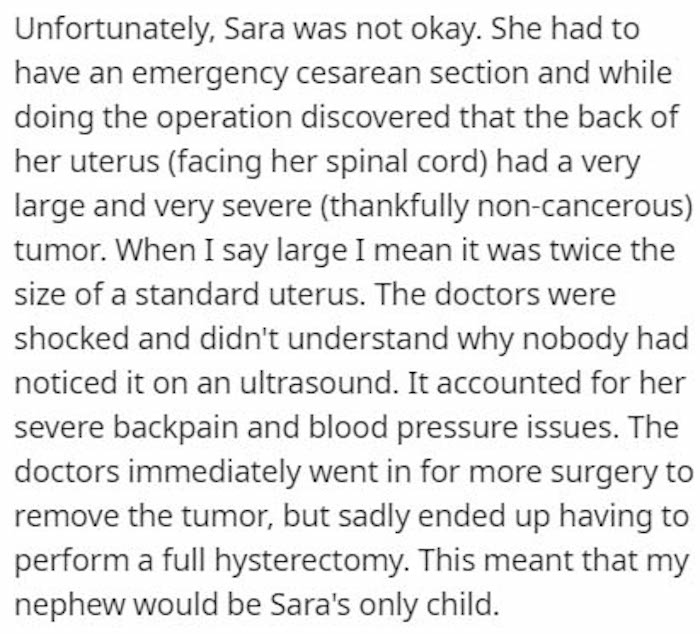 While Sara was in surgery, Paul filled out the paperwork. Can you guess where this is going? 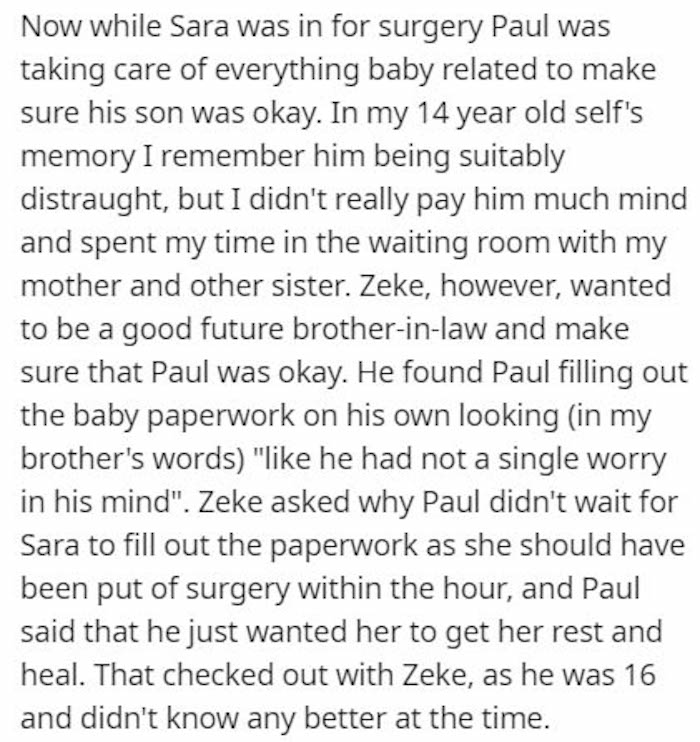 Now I know what you’re probably thinking. “No, he wouldn’t. He knows how much she hates that name. And still, she’d need to sign the paperwork too!” My fellow peoples of Reddit, I regret to inform you that Paul forged Sara’s signature on the paperwork and waited until she was out of surgery to hand said paperwork over. My sweet nephew, that was born on Valentine’s day, was named “Valentino” on his first official birth certificate. I still to this day don’t know why Paul and his family were so insistent about the name. He had even picked out a different one with my sister! And before you ask, no he was never brought up on forgery charges because his parents were “witnesses” to her signing the papers, even though they only got there at the last minute. 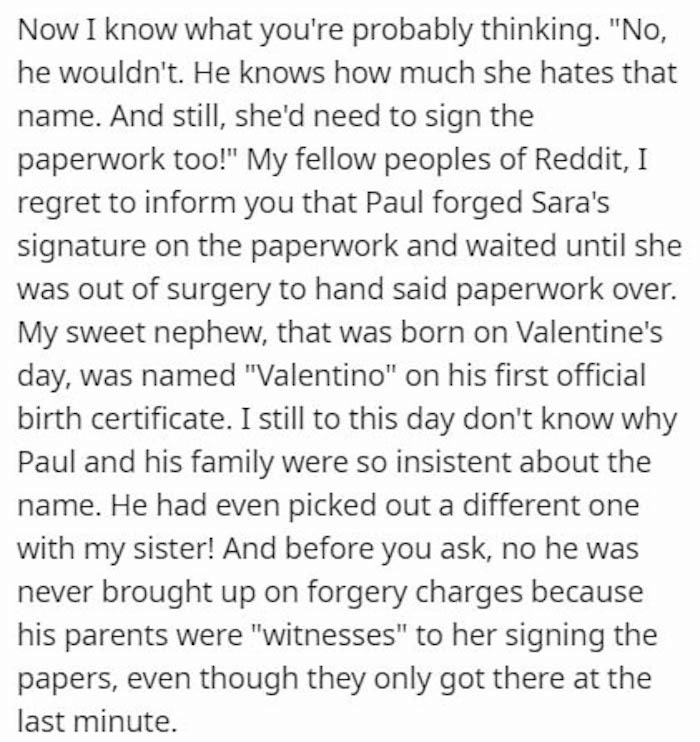 Yes, the baby was named explicitly against the mother’s wishes, while she was having her uterus removed, by her horrible fiancé. Sara did dump him and changed the baby’s name, thank goodness. Paul basically disappeared. Then six months later, some pictures of Paul surface on Facebook. Of his wedding. To a woman he started seeing while Sara was pregnant. 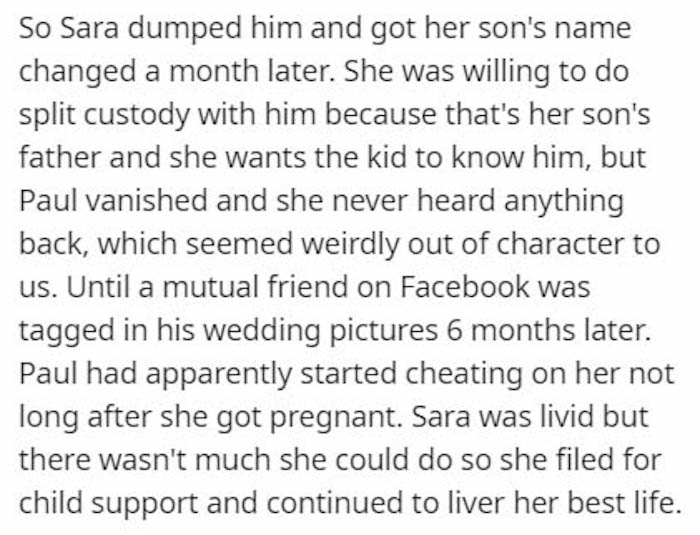 Sara filed for child support, but there wasn’t much else to do. Until the OP grew up and started working at a local salon.

“I’m working one day and who is seated before me but Jane, Paul’s wife, herself,” the OP writes. “I take her back for a trim and she clearly has no idea who I am. That adds up because a mutual friend that still keeps in contact with Paul said that Jane doesn’t know a thing. She has no idea about Sara, that she was the other woman, or that Paul actually has a kid that he’s been (infrequently) paying child support for. She’s in the dark on it all.” 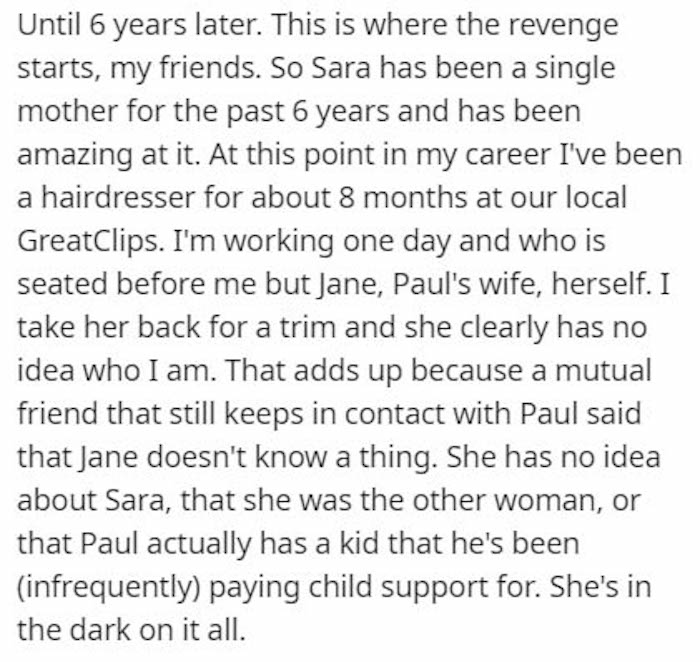 The OP tries to treat the wife politely because she has no idea what a tool her husband is. She’s also super pregnant. As they start talking, the wife says they haven’t yet chosen a name for the baby girl. 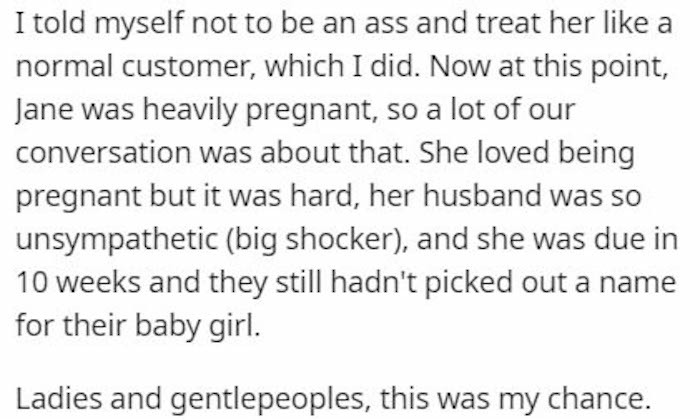 “Ladies and gentlepeoples, this was my chance,” the OP writes.

I asked what kind of name she was looking for and she said “I want something unique and unusual, but not ridiculous like Brayntleigheigh” (you know the ones I’m talking about) and Paul had suggested so many already and she didn’t like ANY of them. So I, conniving little weasel I am, said “what about Sara?”

My sister’s name isn’t actually “Sara” she was named after an older family member that passed not long after she was born, but there was no female equivalent for his name so our parents created one. It’s a beautiful name and just what Jane was looking for.

And the wife DID end up naming her baby after “Sara” which the OP hopes remind him to pay his child support.

And the little boy ended up okay, too, and still sometimes gets called “Val” at home as a nickname. 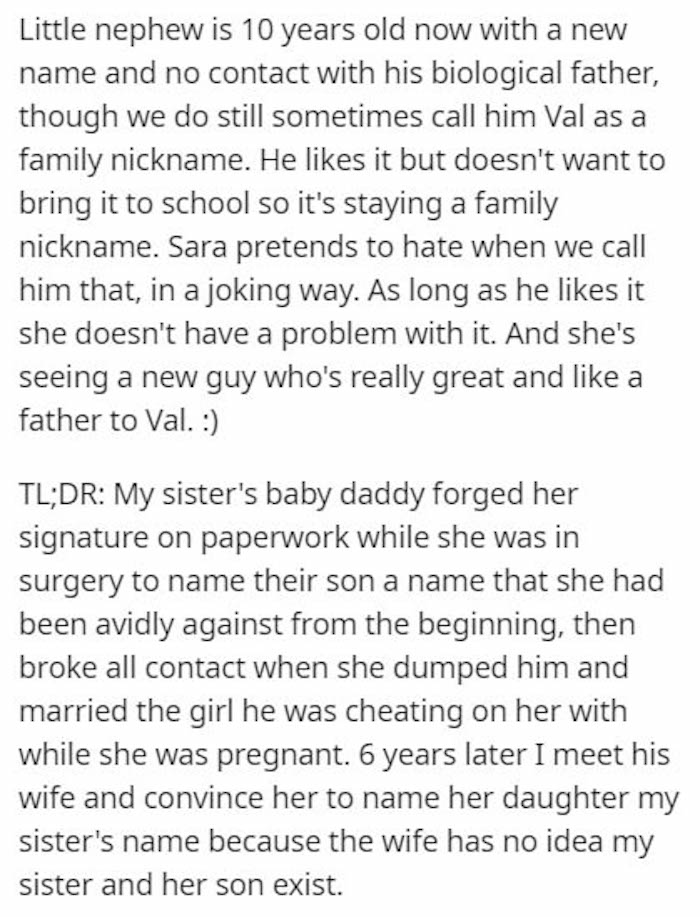 This is an amazing story, though it doesn’t sit right with me that Jane doesn’t know about her husband’s secret life. I mean, he’ll probably make her miserable in his own way eventually, but it’s not her fault she’s in that mess NOW. Oh well.

More of the best revenge stories: