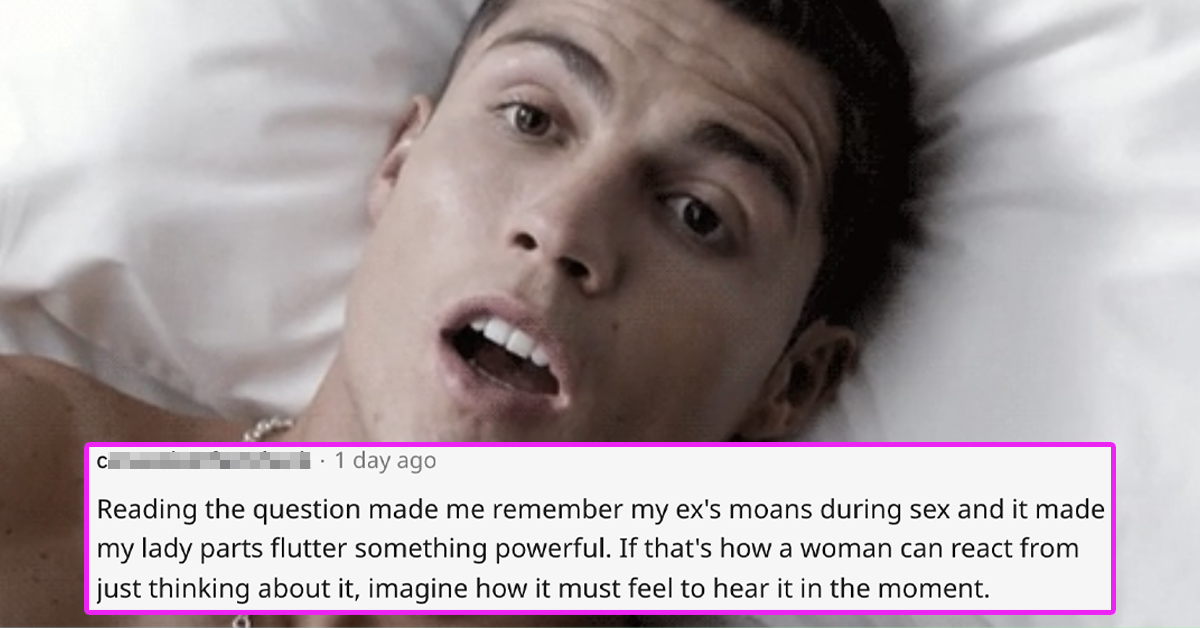 Guys, are you the strong silent type…in bed? Ever wonder if women would prefer you to be, umm, a bit louder?

Thankfully there’s AskReddit, the place to go to have your deepest thoughts answered – with sex often being a topic of interest.

Mysteries surrounding gender are often revealed, with this recent post being a true revelation for straight men.

“Ladies, what are your thoughts on men making noises during sex? Is it a turn-on or not?”

In case you didn’t get the memo, here are 20 other ways they said “Yes, we like the noises!”

Reading the question made me remember my ex’s moans during sex and it made my lady parts flutter something powerful. If that’s how a woman can react from just thinking about it, imagine how it must feel to hear it in the moment.

Of course it’s a turn on! Obviously it depends on the sound, but a silent guy isn’t telling me what he likes! Y’all know how much a moan or sigh instructs you how good things are for us, it’s the same in reverse!

Sound is rewarding, encouraging and also a turn on!

Pro tip, if you’re a fairly quiet man during sex, get your mouth really close to her ear. Even a whispered moan sounds amazing from 1 inch away. Just don’t scream when you’re that close.

I would rather have someone moaning too loud than someone not making any noise at all. It’s such a turn off when they’re silent.

I can’t with silent people we’re not filming a silent movie. if there’s people around like thin walls or something then keep it at a reasonable level. But then there’s music for that too so. Turn it all up lol.

My husband lets out a quiet moan when he first slides in to me that gives my V the butterflies. It’s such a turn on! I also love when he moans during sex. There is probably nothing sexier that he does in bed without trying.

If I know my partner is not only enjoying himself- but enjoying ME, my confidence and arousal goes through the roof!

Amazing and a huge turn on. Also, doesn’t matter what you sound like in my opinion, my husband is a real grunter which I always found sexy. We also have a casual male partner we see together who makes the sexiest little whimpers. I find both equally attractive, it just lets me know you’re into it as much as I am!

Just entered into a relationship recently. The man talks and makes noises during sex. This is SUCH a freaking turn-on and something i didn’t know i needed in my (sex) life. Ruined me for the quiet ones tbh.

Turn. On. Tell me what you like, tell me what you want me to do, and for God’s sake don’t be afraid to show me you’re enjoying yourself. Sex should be like a fight, a dance, or at least an interaction 🤦‍♀️ don’t think being silent means you’re tough or something. Have fun with it and let loose 😊

YES AND I CAN NOT STRESS THIS ENOUGH

Best sound I’ve ever heard tbh. Nothing could be bad about knowing you are doing something to make your partner feel good and they have to vocally express that.

A couple nights ago, I kissed my boyfriend’s neck in a semi-playful (but also ‘ I’m totally in the mood’ sort of way) and he let out this involuntary groan/moan and, hand to the gods, I was ready to do anything to hear more of those sounds.

Fellas (and really anyone of any gender): if someone is getting spicy with you, chances are good they want to know you are enjoying yourself and what things they are doing that get you hot. Those sounds are 1. Information I’m using to make decisions and 2. Get me even more enthusiastic to do things that make you make those sounds.

Can’t really imagine people saying no to this question though.

Massive turn on… love dirty talk and everything… the I love yous and knowing how vulnerable and open my husband is… god it’s amazing!! Gotta go now 🧐😂

Wholeheartedly yes. I love the sounds that men (and women tbh) make during sex, especially when it seems to kind of be forced out of them, like they couldn’t help but moan at how great it feels. It’s a huge turn on and also gives the signal that whatever you’re doing to them is very pleasurable and you should continue doing that thing. People who are completely silent are not great sex partners to me because I need their noises to guide how Im doing things.

If I can’t hear you, I assume you’re not into it and I’m already making plans to get dressed and leave.

Hottest thing a guy can do for sure. It’s honestly the biggest turn on imaginable. Not many of them do it, but the ones that do are to he fucking held onto. Just thinking about my guy moaning as I touch him gets me going.

I love it!! Pleas be vocal, moan, grunt, curse, it’s a huge turn on, and it’s just weird to me if I’m the only one being vocal 🌚

I personally HATE when a man is silent.

A moaning man makes me turn in to puddle.

I want to know he’s enjoying himself!

I looooove when he makes any kind of sound. It turns me on even more to know that he’s liking it. I specially the noises he makes when we’re playing on one of our kinks. His reaction really gets me going on that one.