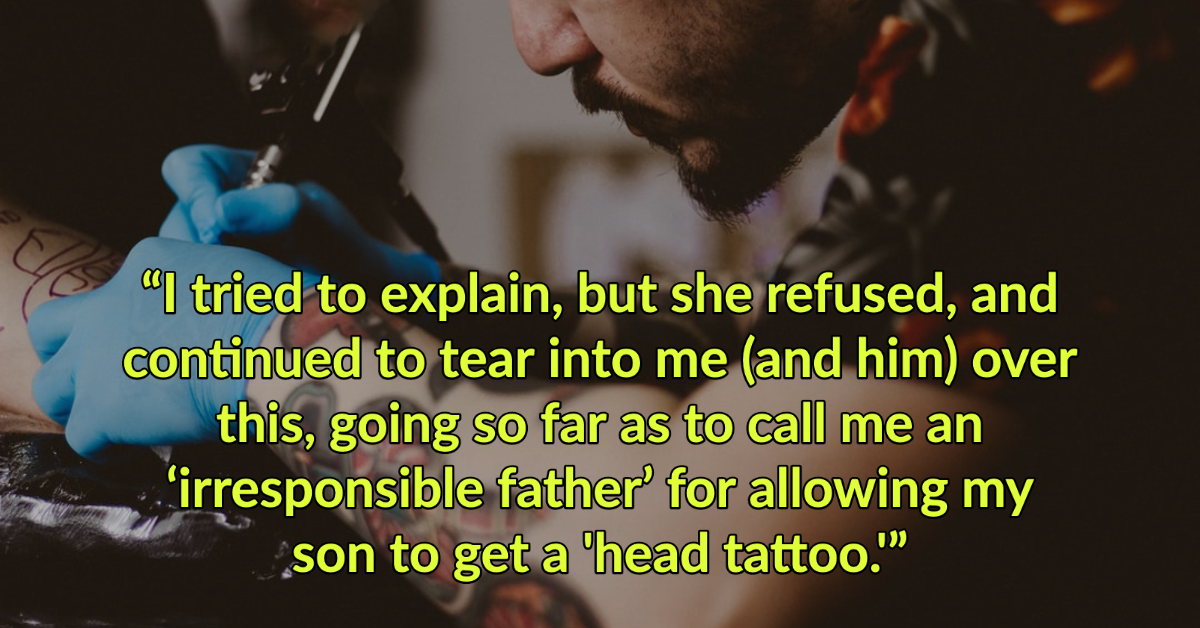 When I got my first tattoo, my mother was not pleased. Second one, also not pleased. But then a few years later, and struggling with alopecia (an autoimmune disorder), my mother got her eyebrows tattooed on.

“Now we both have tattoos, Mom,” I laughed.

She said she was so relieved she wouldn’t have to draw on her eyebrows anymore. They looked super real, and it saved her a lot of time and stress.

Now, imagine that you are a teenage boy with alopecia that causes your hair to fall out. Would you get hair tattooed on your head? One father on Reddit helped his son do just that.

When he came up against criticism at his son’s school, he went and had a teacher fired. Did he overreact or was he just being a caring Dad?

“My son ( just turned 16) has had alopecia since he was young. For those of you who don’t know, his hair falls out. It can progress with severe stress, and since elementary school, has been bullied mercilessly for it. The only real treatment was these injections into his scalp, which as I’m sure you can imagine, are super painful. It was getting to the point that he’d become anxious closer to the doctor’s visits, so I started looking at different options. I came across micropigmentation, and suggested it to my son. He agreed that this seemed like the best option, and so for his birthday, I managed to get an appointment set up under his doctor’s recommendation, which made it totally legal,” writes the OP.

The OP and her son were so thrilled with results: “Even if it’s buzzed, this stuff looks so real, and his confidence is just through the roof. He’s no longer hiding under hats…it’s just really great to see.”

“Admittedly, I should have probably asked first, but I had flipped through the guidebook and saw nothing about tattoos in their policy. However, I got an angry email on Monday evening from a substitute teacher. She overheard my son explaining his procedure and felt compelled to tell me how this ‘mutilation’ is illegal and unacceptable. I tried to explain, but she refused, and continued to tear into me (and him) over this, going so far as to call me an ‘irresponsible father’ for allowing my son to get a ‘head tattoo.’ She called him a bad example, and said that in no way is this acceptable under school rules.”

The OP says that the teacher’s behavior pissed him off. So, he took action.

“I contacted not just the principal, but also a friend of mine whose on the board and the head of school, and forwarded them the conversation (with highlights), along with my own very strongly worded letter, and other emails documenting the times that my son experienced bullying at that school, with minimum (if any) repercussion to those involved. I’ll admit I was angry, but I threatened to sue them for discrimination. Needless to say, this prompted a lot. Apparently the board is panicked about this, and the sub was fired. Word has gotten around due to the gravity of it all, and a few parents have called me the AH, saying that I took the threats too far, as this substitute was not a normal part of the school, and I shouldn’t have taken such an aggressive approach.”

Was the OP out of line for getting the teacher fired and also causing a stir? I’m confident I would have done the same if this was my son. What do Redditors think?

“She was way out of line and the tattoo in question was a quality of life issue done with a doctors approval. I would have done the same as you,” said liz_eliza.

“He didn’t get a ‘tattoo’ he got medically important pigmentation to correct a valid medical issue so he could be bullied less and focus on his schooling. That sub was way out of line and she doesn’t belong around your child. She claimed you were an irresponsible father while she was actively acting irresponsibly as proven by her swift dismissal,” said infiniZii.

“It is *not* far fetched for some nosy, opinionated, holier than thou old lady who happens to be a substitute teacher to act like this. I’ve had several in my lifetime, and I can practically *hear* the tone of her voice as she spoke to OP. Since she was a teacher at the school before this, she’s probably harassed and abused kids her entire career with impunity and never thought twice about continuing that trend when she stepped out of the full time role. Subs have way less sway or protections so she’s not be worth it to the board to keep on if a pricey lawsuit came down. Good riddance to her, I say. She shouldn’t darken any more kids formative years. Teachers like her give teaching a bad name,” opined Sweet-heart-.

“You stood up for your kid against a bully that he could never beat. You should be proud. And anyone should be very aware that if they mess with your son, they will have to deal with you, and that you’re up to escalate any fight to protect him, as a good parent should. Good work. Rest at ease being sure that you made your son stronger and more confident today. We learn to stand up for ourselves seeing examples like this from our parents,” said Hypnotic_Mind.

“First I’m going to say that you didn’t get her fired over this she got herself fired by being a judgmental AH and attempting to bully a 16 year old using her position of authority. She then attempted to bully you, a grown ass adult who had no problems going nuclear on her ass. Only you did it professionally, went to her boss and threatened to sue, which you most certainly would have won as he was being discriminated against because of his alopecia. The school knew this. They knew getting rid of her was easier than dealing with a lawsuit they had no hope of winning and throwing their reputation through the mud. Also her history(as you described in other comments) of overstepping her boundaries and calling parents personally to inform them of their child’s actions is a huge factor here; I can assume a good reprimanding towards the parents was also a part of those conversations. Teachers don’t just get fired over one incident, not even subs, there is usually a trail of incidents logged and once a big one comes up, like yours, the school finally decides to act. NTA. You did an awesome thing finding a solution that worked for your son and gave his confidence a boost. His mental health is sure to improve further and knowing you stood up for him is bound to help also. In this case he doesn’t have a head tattoo really, it’s more like his head is artfully covered in permanent hair,” explained Taliasimmy69.

“My sister has alopecia areata. She was in school a looong time ago and was horribly bullied. Got the shots in her head, too. Also, steroids, which added weight problems. No one did much about bullying back then. It’s great to see you stick up for your kid, and you can never go too far when you’re in the right. Those school years permanently affected my sister’s self-esteem and her inability to value herself for the awesome person she is. So great to see the strides that have been made since then, aesthetically. No, it’s not ‘just hair.’ You rock,” said uplatetoomuch.