Well, welcome to our worst nightmare.

On a recent flight, a passenger noticed a plane window was broken, right next to his seat. People became aware of the situation via TikTok, where user Karl Hadded shared his experience discovering the window and alerting plane staff.

In the video Haddad records himself touching the window, which has become loose. He then alerts a flight attendant, who brought the issue to the plane captain. Apparently, the crack was only the window’s first layer, but the plane still needed to safely land to address the problem.

The video went viral, with 5.1 million views and nearly 800k likes. People were immediately freaked out by the video, for good reason.

Truly, seeing him play with the window was… a lot. 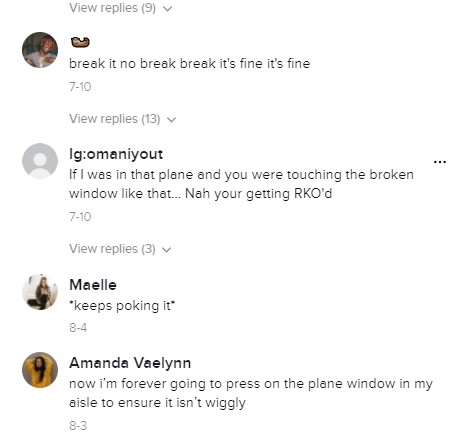 According to BuzzFeed News, the flight was toward the end of a 27-hour trip. The news outlet also reached out to Air Canada — the airline the plane belonged to — and was told there is no need to worry.

“The part in question is a window blind frame assembly where the window blind slides up and down. This is a plastic part of the trim around the window and not a critical structural part.”

We’re just happy everyone is safe!