Deciding who to invite to a wedding is a sensitive process, even if you have all the money in the world. You want to surround yourself with people who love and support you, not every rando you’ve been to a Bible study class with.

A bride-to-be who posts under the name u/Lioness_96 on Reddit clearly had a grasp on who not to invite when she didn’t extend an invitation to an old friend she’d fallen out of touch with.

She shared the conversation that resulted from that decision to the subreddit r/weddingshaming under the title, “Girl I rarely speak to anymore asks if she’s invited to our wedding. After telling her that she isn’t she tells me I should rethink marrying my fiancé.”

That is a pretty good summary of what happened, but you have to read the texts to believe it. It started with her “friend” asking about the wedding date, then asking straight out if she could come. “We’re actually gonna have a really small wedding with immediate family and close friends,” the bride wrote.

“Oh well that shows me where I stand, cheers,” the woman responded.

Yes. Yes it does. But she wasn’t happy to let that lie. 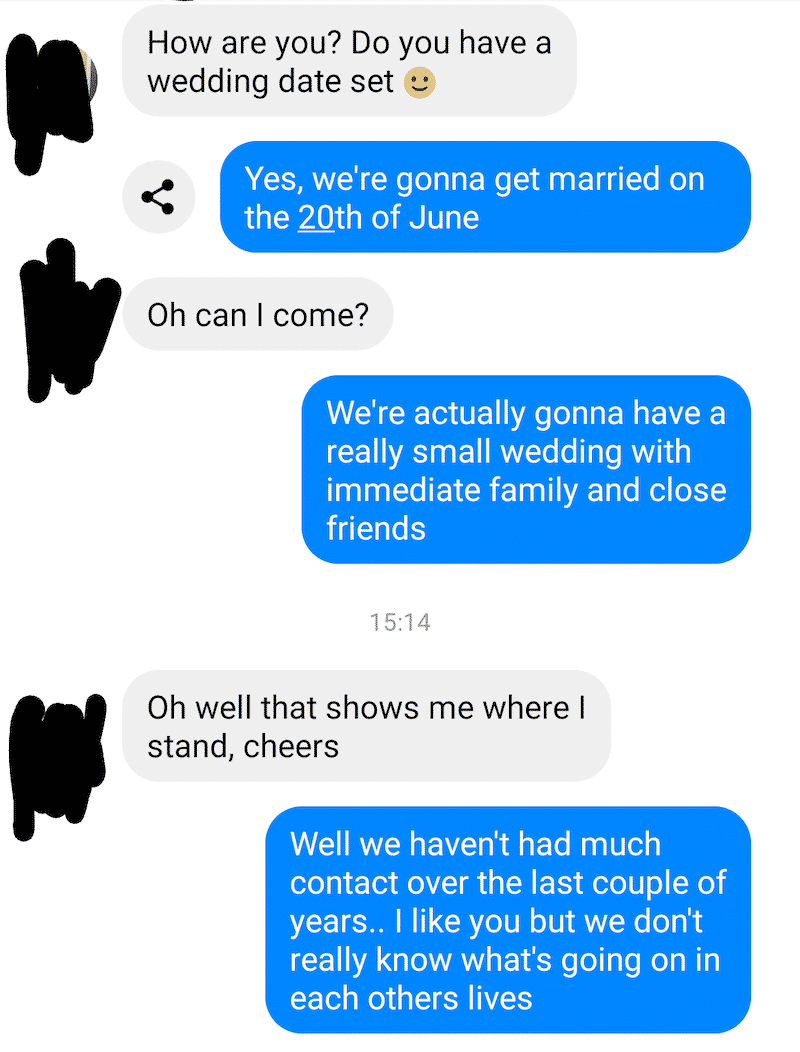 When the bride answered that they haven’t had much contact over the past few years, nor do they know what’s going on in one another lives, the old friend launched into a monologue about how she’s kept the bride in her prayers over those years of disconnect. And it’s brought some revelations.

“To be honest, I think this marriage is something that has been more forced than something that has come to you both,” she explained. “[He] never had the natural desire to marry you and you are…so so young. I have known you for a long time, and you have been in constant prayer about this. I honestly don’t think you are making the right move and that this will bring long sustainable happiness to you both. Please take more time to pray about this, and remember to take time to be still. Marriage is a very massive commitment.” 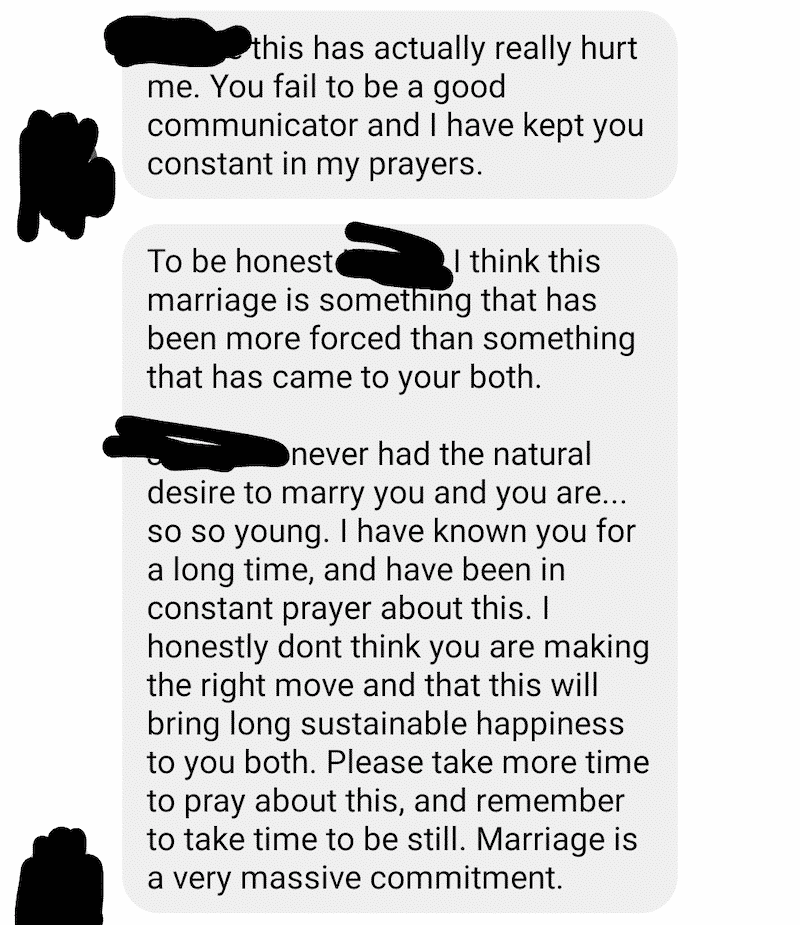 She still had more to say:

I know it’s not easy to hear but part of me knows that of this you already know. Yes you have stayed celebate [SIC] for him, prayed together and supported one another. But I cant help but feel God has so much more for you, something more golden. Please don’t think I am telling you this to hurt you. I woudn’t be a friend of before if I didn’t share this with you.”

Honey, you’re not a friend now! And God is not interested in this petty attack, I assure you. 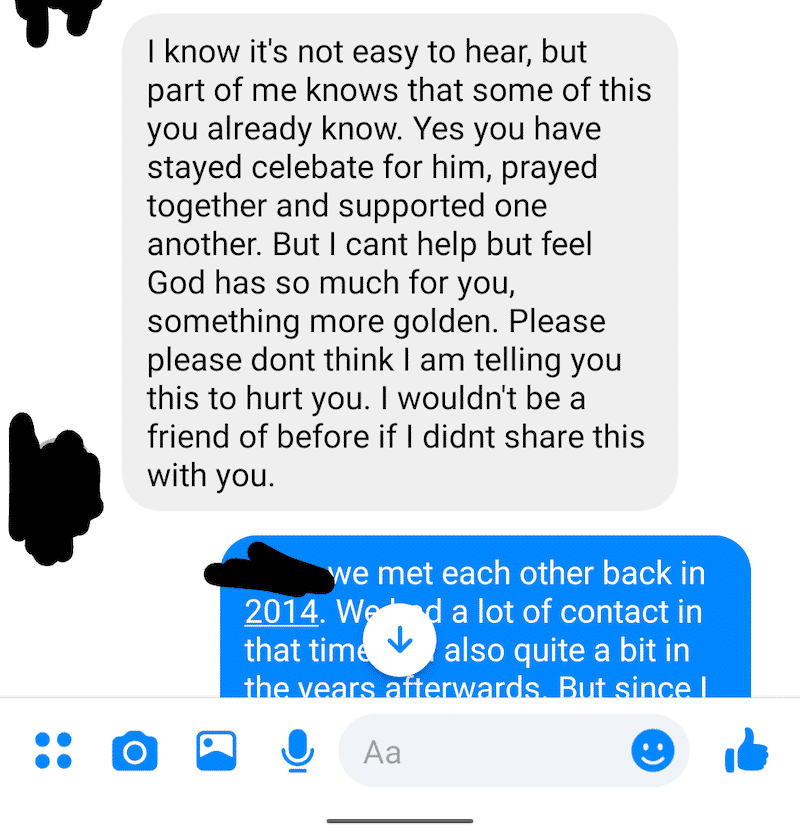 The bride’s response to that is cut off, though it’s pretty surprising she responded at all. This woman would have been perfectly happy to celebrate the bride’s choice as long as she got a free plate and a chance to do the Funky Chicken in her Sunday best. But now that she’s not invited, God is sending her “cancel the wedding” messages.

Some people were curious how old the bride is, wondering if it’s a child wedding, but in a comment she says they’re both 24 and her fiancé is 28:

I’m 24 so not super old. But we have been dating for 6 years so it’s not like we’re still in the honeymoon phase. Sad and kind of ironic part is that she’s the one who didn’t make great choices in regards to her partners for the last years.

So a 22-year-old dated a teen? Not great, but still not technically illegal and I doubt her friend would care about that with so much talk of celibacy. The people in the comments were fed up on the bride’s behalf, too: 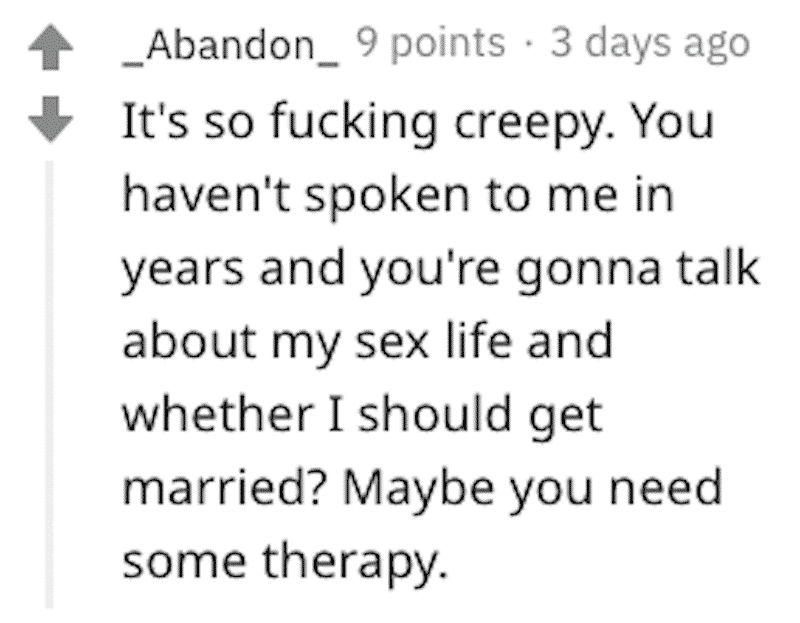 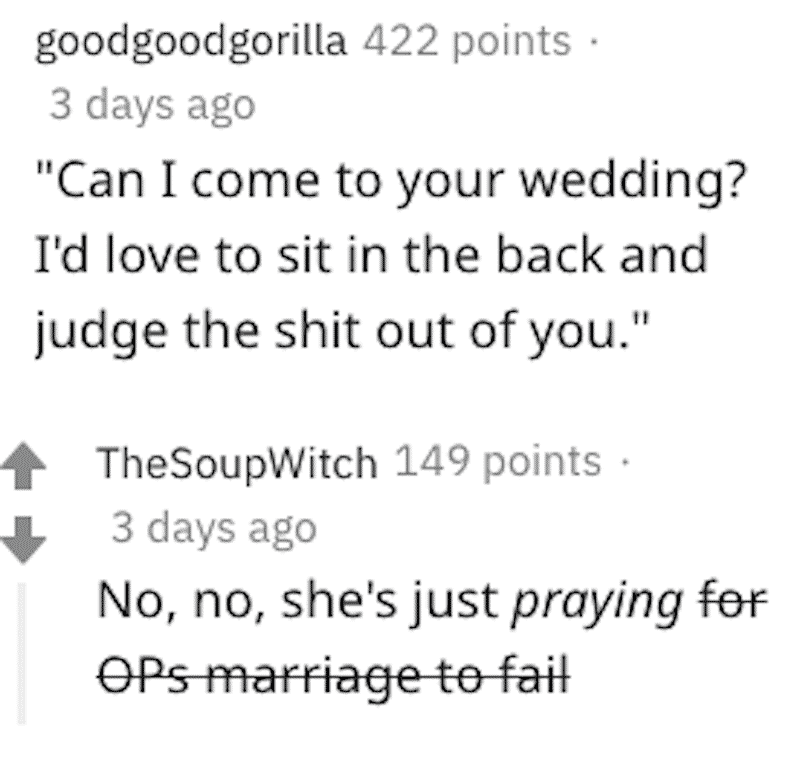 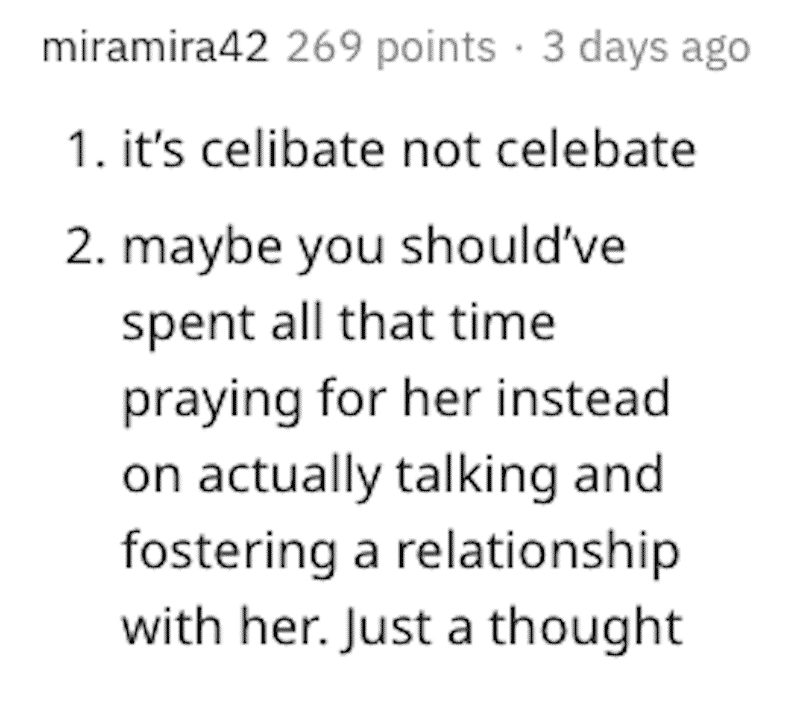 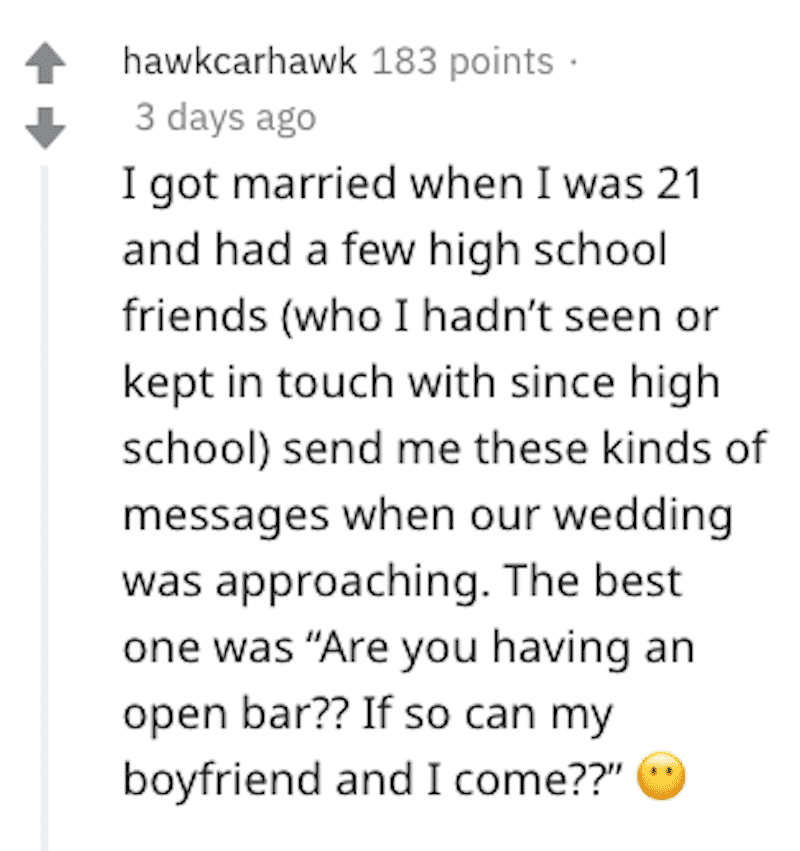 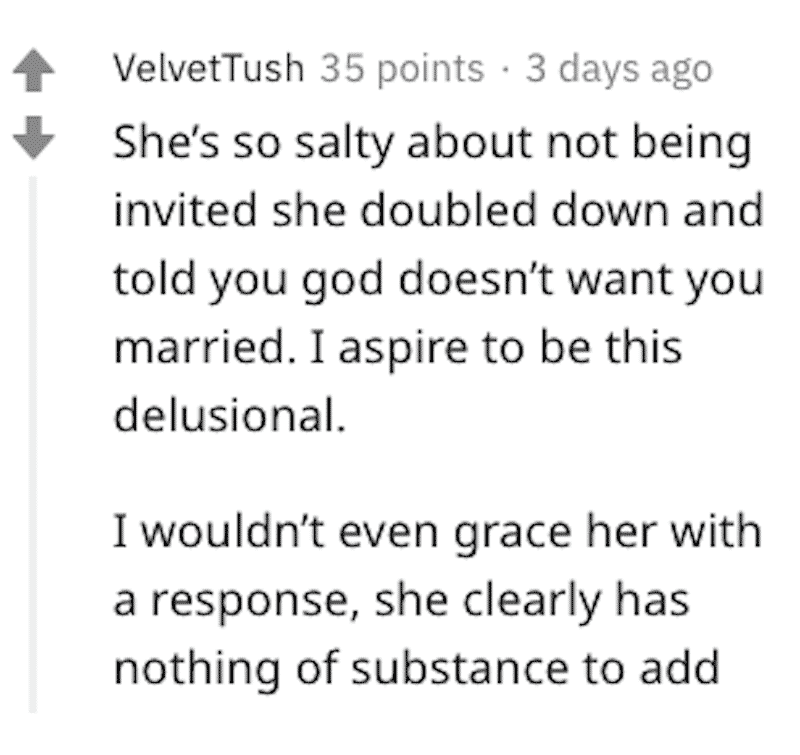 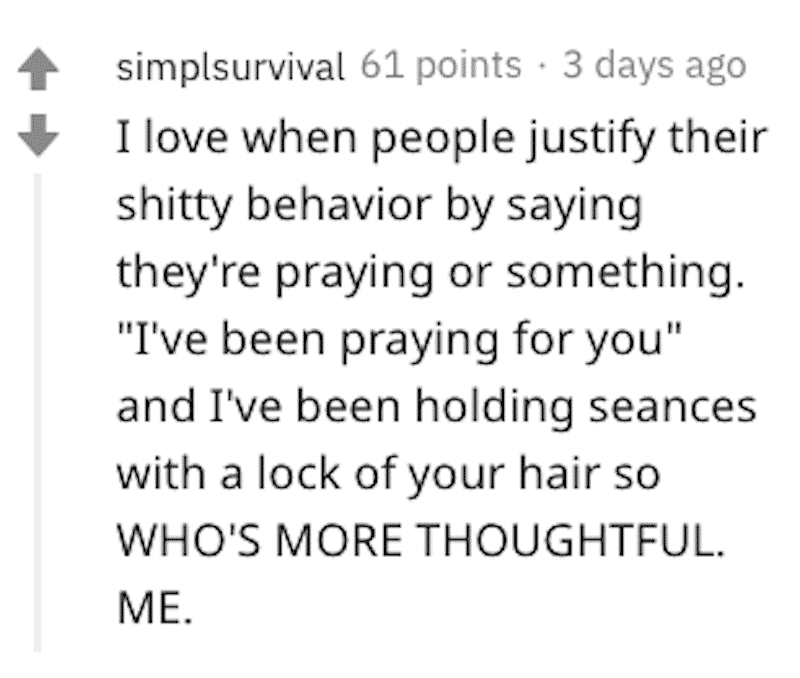 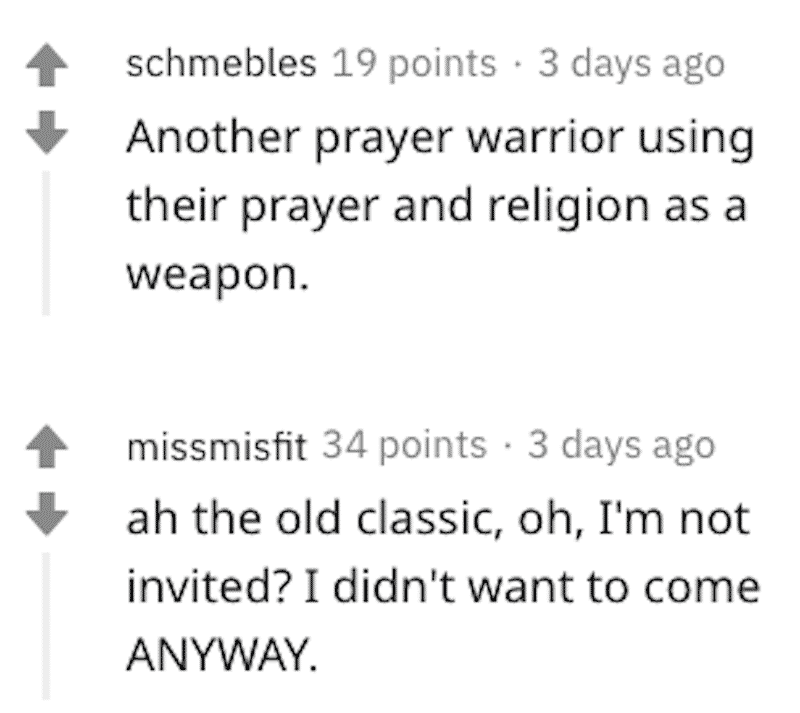 The lesson here is that if you haven’t gotten an invitation through the mail, you’re not gonna get one from another person’s mouth. They had a good reason not to invite you. Pray on it.

More of the worst wedding guests: