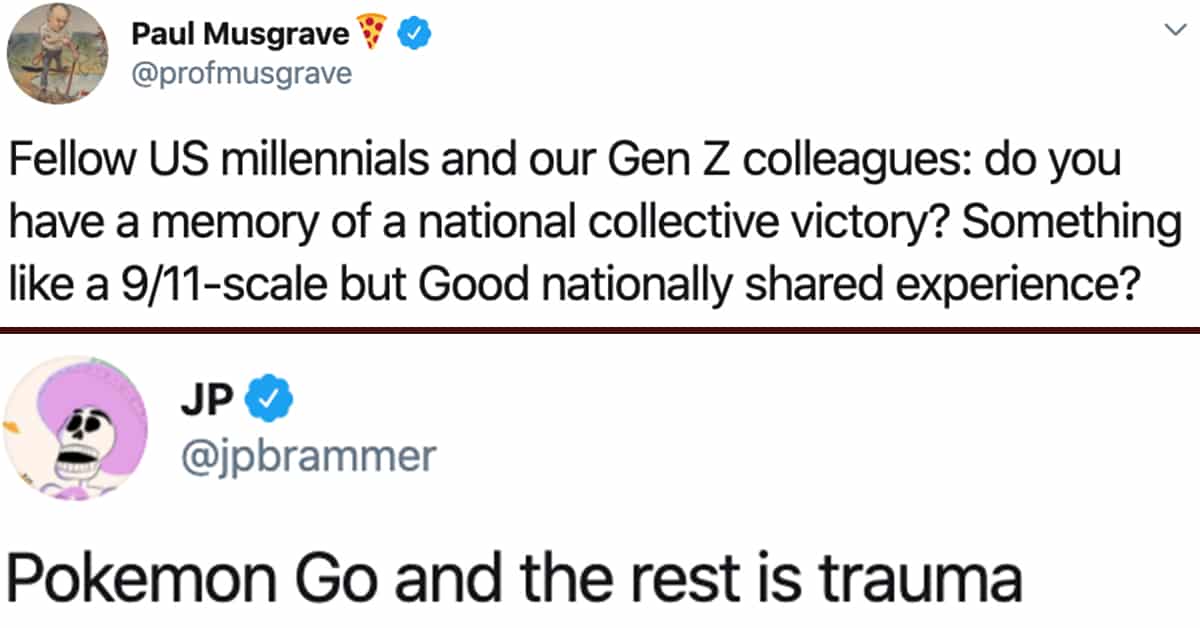 Generations are often defined by the conflicts they lived through in the U.S., at least for the last hundred years or so. The greatest generation will always remember winning WWII as a moment of shared triumph, as an example. It’s also a pretty good example of how a memory of triumph is usually preceded by some pretty horrible events.

Right now, people are trying very hard to believe that current horrible events will be survived—that there might be a moment of success and unity ahead.

And it’s really hard. Political scientist Paul Musgrave posed an interesting question of millennials and Gen Z: when was the last time it felt like we were sharing something good together, on a national level?

Fellow US millennials and our Gen Z colleagues: do you have a memory of a national collective victory? Something like a 9/11-scale but Good nationally shared experience?

The question left people really scratching their heads. What do we remember that’s Good? Maybe the legalization of gay marriage? The only other answer that seemed to come up again and again was when Pokémon Go was released. On the other hand, there are some good memories in here, even if some of them are jokes.

There is a possibility that we will one day share a sense of triumph again: when we can finally come out of quarantine together. I’m gonna high five everybody.

Pokemon Go and the rest is trauma https://t.co/GfuFvaQmak

Growing up at the same time the Harry Potter movies were coming out https://t.co/D4s1s4pJnB

Does legalization of gay marriage count? And I guess Obama’s election but that feels disappointing in hindsight and happened against the backdrop of economic catastrophe.

That got pretty creepy too. I mean good riddance but millions of people cheering for an assassination sounds not great.