After the Super Bowl LIV‘s halftime show performance with Jennifer Lopez and Shakira—who both absolutely killed it—plenty of people took to the Internet with their panties in a twist after seeing women dancing. Even though the performance was incredible (*fans self*), some people thought it was vulgar, trashy, too sexy, too crotch-y. The pole dancing? A sin. And forget about Shakira’s tongue-wagging (a Zaghrouta). Over their heads.

Absolutely the worst, most vulgar halftime show ever. I was embarrassed for my kids and and ashamed of Fox for televising it. J LO must have had and STD the way she kept grabbing her crotch #NFLHalfTimeshow

But the show more than that, of course. The performance lovingly included Lopez’s 11-year-old daughter Emme, various references to politics and lots of Latina and Middle Eastern pride (Shakira is both Latina and Lebanese). Plus, people seemed to love the idea of two women in their ’40s and ’50s being way, way hotter than the rest of us.

In the post she wrote, “I’m also seeing posts that are saying things like “well, that just set women back 10 years,” and “there are kids watching, why were there ropes and leather?… Dancing on a pole is a challenging, athletic and beautiful form of dance. It’s called POLE DANCING. ⁣ ⁣ Was it hot? Yeah. ⁣ ⁣ Was it entertaining? Yeah. ⁣Was it inappropriate for kids? No.⁣ Was it anti-feminist? No. ⁣Happy to discuss this more, but I couldn’t stay quiet seeing these posts. ⁣ ⁣ Womxn being awesome is just that.” 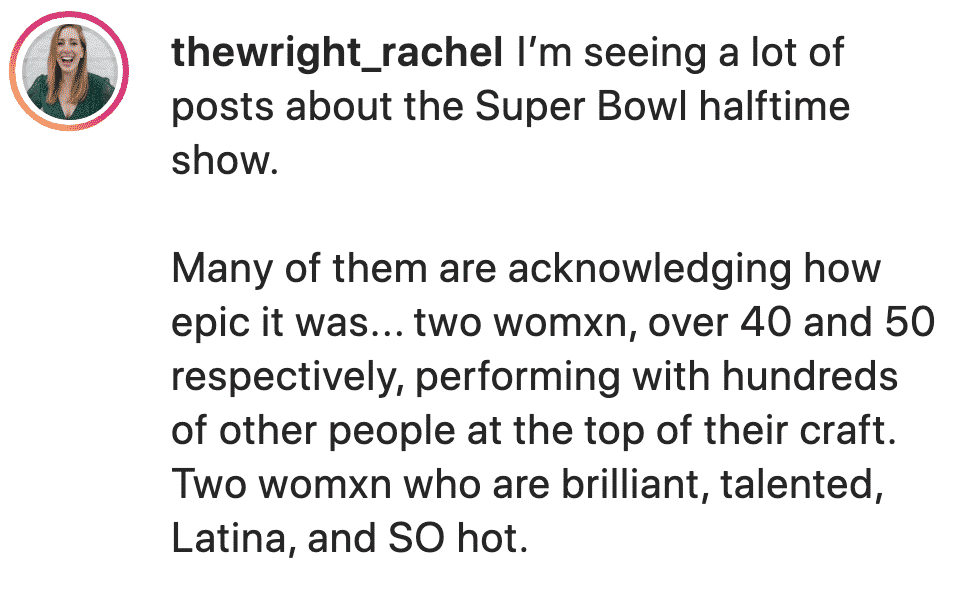 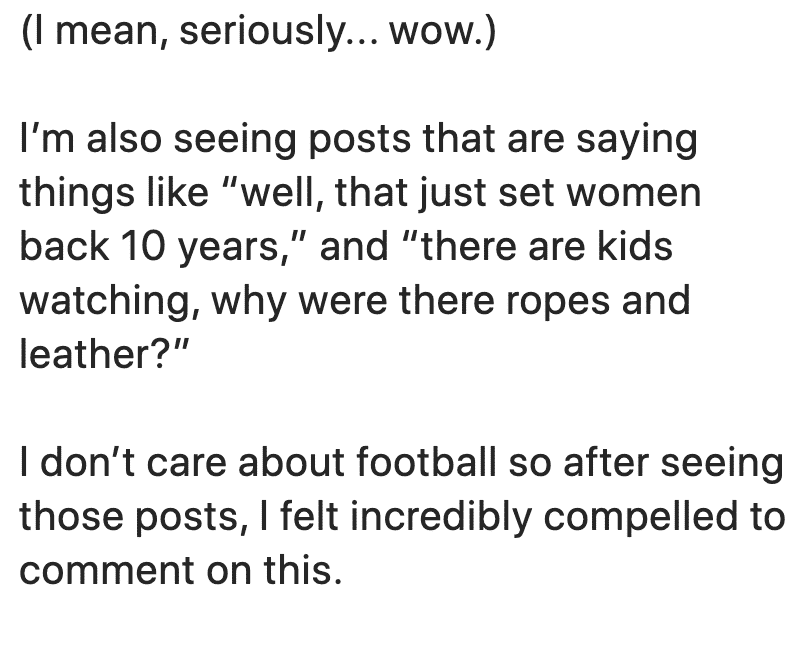 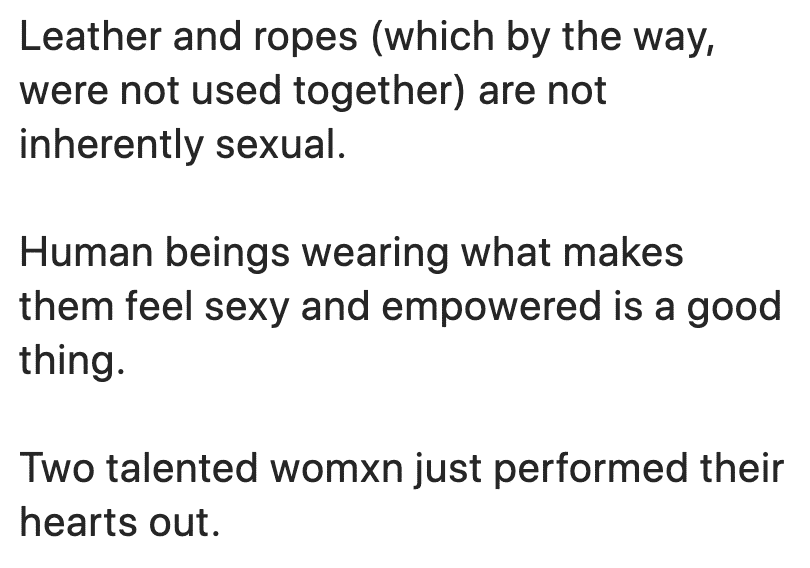 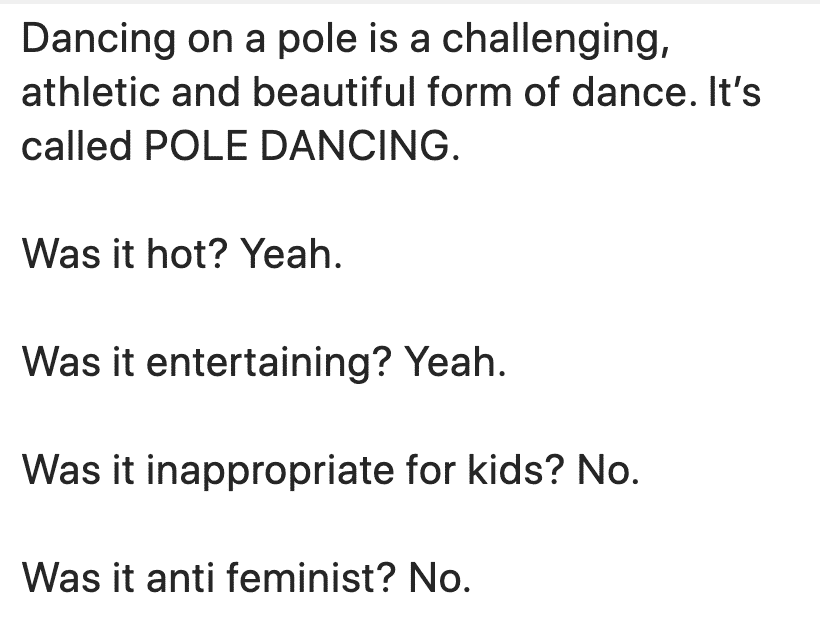 And people agreed with her: 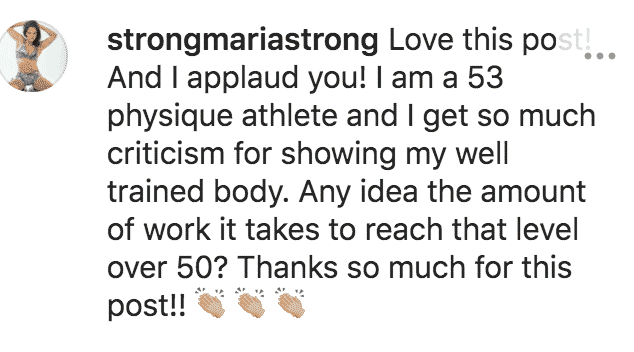 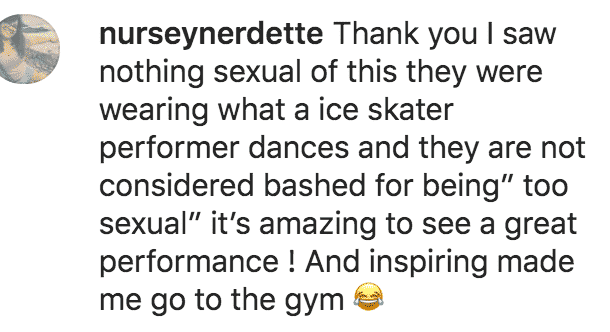 On Adam Levine taking his shirt off at the Super Bowl, “Don’t get me wrong, it was beautiful. But he had his nipples out, and no one felt that wasn’t family-friendly. So, why are these two women, [who are] showing off their talents, considered inappropriate, even though they were fully clothed?”

Wright also discussed how the show was in no way a disservice to feminism: “It’s the exact opposite. The whole point of feminism is that people should be able to do what they want and wear what they want because it’s their basic right. If you respect women, you have to respect them while they’re sexual, not sexual or anything in between.”

Her opinion? “We have to start taking responsibility in these situations. We need to ask ourselves why these things make us uncomfortable and be willing to hear other people’s opinions.”

Here’s what people had to say on Twitter. Thankfully, more people are using their brains and appreciating J-Lo and Shakira’s art and skill.

Human beings wearing what makes them feel sexy and empowered is a good thing. Commenting on people’s bodies, appearance is not. – full stop. https://t.co/dmfJdfl33V pic.twitter.com/rjbIrEDgLB

Pole position 🏁🏈💃 @shakira and @JLo delivered the greatest Super Bowl halftime performance ever. Its critics need to get a grip. And a life. https://t.co/DyUYhLXrNy

So upset at the outrage of people towards this #SuperBowl halftime show, calling @shakira and @JLo vulgar. They were amazing, and did ya’ll forgot about Levine last year? Double standards people. We can be sexy if we want.