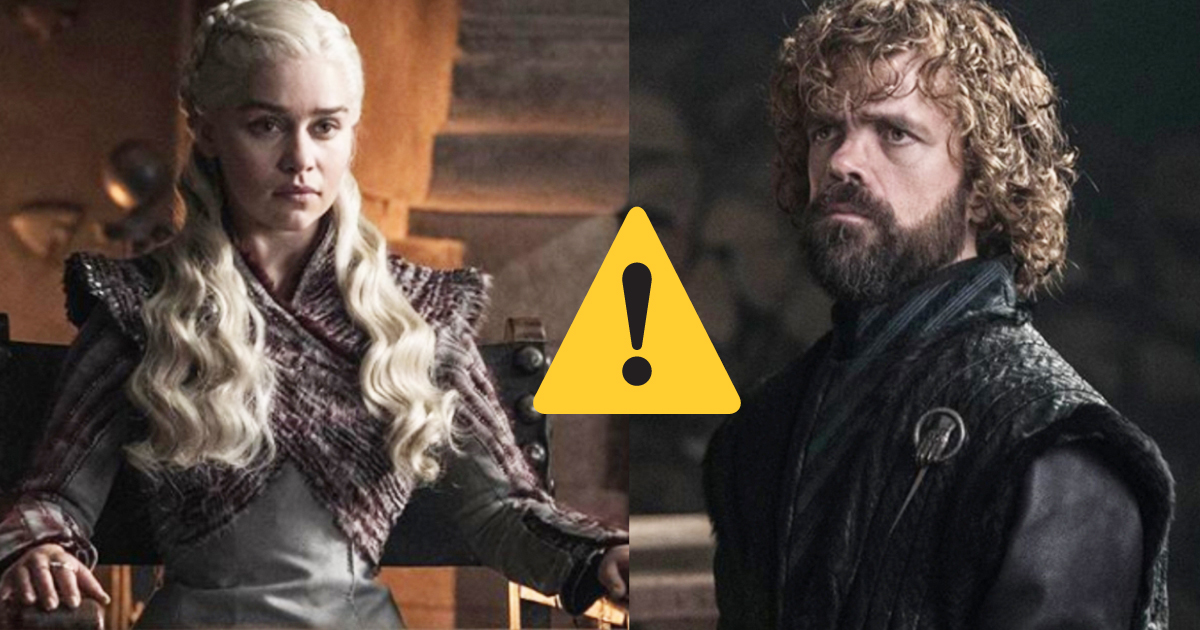 We’re currently four episodes into the eighth and final season of the HBO hit show Game of Thrones, with only two more episodes to go. People are losing their minds with anticipation over what happens, but nobody wants the ending spoiled for them before it actually happens (well, most people don’t). Which is why it really sucks that, because this is the internet and clearly we can’t have nice things, someone has gone and released the ending of the whole show ahead of the final episodes.

The info was posted on Reddit by user cgmcnama, who said that people wanted to know what happened in the end and that the post had been heavily requested. He also gave some disclaimers, writing, “To be clear, these are leaks that could be true,” and “Believe all, some, or none of the content but it for you to decide.” So dude’s not saying this is absolutely, definitely true, but it’s important to keep in mind that this is all 411 collected from people who’ve leaked accurate details about Game of Thrones before. So we’re going to go out on a limb and say it’s probably true.

So seriously, if you’re not interested in knowing HOW THE WHOLE SHOW ENDS then don’t read any further.

So many of the characters we thought would die in the Battle of Winterfell (the third episode) made it through, so there are still quite a lot of characters whose fates have not yet been determined. And you can find out below, but be aware: this will totally ruin the show for you.

Just so you understand, these are not “spoilers” from episodes that have already aired. These are things that HBO hasn’t yet shown. You probably shouldn’t look. This is the last warning.

Still here? Okay, then it’s safe to assume you want to have the show ruined for you. Look, this brings me no pleasure. You’re on your own…and the rest of the post is VERY DARK AND VERY FULL OF SPOILERS.

I’ll go ahead and break down the predicted outcomes for each of the characters. Read on if you hate yourself and like having things ruined.

The Mountain and The Hound aka Cleganebowl

Remember those “Sunday Sunday Sunday! You pay for the whole seat but you only need the EDGE!” commercials for Monster Truck rallies? That’s how people feel about “Cleganebowl,” the name that fans have given to the much-anticipated clash between the Hound, Sandor Clegane, and his brother, the Mountain, Gregor Clegane.

It’s the fight that everyone has known is coming since the finale of the seventh season, when the brothers faced each other for a moment in the dragon pit outside King’s Landing. “Remember me? Yeah, you do,” the Hound told his brother. “You’re even uglier than I am now. What did they do to you? Doesn’t matter. That’s not how it ends for you, brother. You know who’s coming for you. You’ve always known.”

Not a whole lot of details, but according to Reddit, the duel will probably take place during Daenerys’ attack on King’s Landing, and it kills them both.

All we know about the show’s most hated character is that Jaime kills him sometime during the attack on King’s Landing. I will honestly be so happy to see him die and so will probably everybody else.

Varys, as truly the sanest character, wants to do what’s best for the realm, so we know he’s going to betray Daenerys. That means he has to die. Details are scarce, but one poster says he’ll be burned alive. Will it be when the Dragon Queen sics Drogon on King’s Landing and it all goes up in flames? No idea.

Tyrion isn’t a violent man so it makes sense that he asks Daenerys to bestow mercy upon King’s Landing. But, as you can probably guess at this point, she refuses, and he tries to resign as Hand. He frees his siblings, Jaime and Cersei, who Daenerys has captured, and she, in turn, has Tyrion arrested. He does get a trial, a big scene in the dragon pit. Here’s a description directly from Reddit:

Tyrion’s trial in the dragon pit is a major scene and has no Jon, Dany, or dragons. Sir Davos is present not wearing the Hand of the King pin along with all 3 stark children. Samwell Tarly, Brienne, Robyn Aryn, Grey Worm, an unknown man wearing golden clothes (likely Dornish), and another unidentified man (n older short bearded one dressed in green) will be there as well. Bran will flash back to season 1 where Tyrion Lannister told Catelyn Stark, “I never bet against my family”. Tyrion is filled with anger and resentment against them because he saved them against Stannis and they still turned on him. Thinks people of King’s Landing deserved it. He saved them and were ungrateful (trial of Joffrey’s murder) Will fall to his knees in the middle of the speech dragged down by the weight of his actions. His death was filmed in studio so not sure how he dies.

So he does die, but it’s unclear through what means. And the spoilers do say that Sansa will betray him, although she’d promised that they’d rule together.

The show had a ton of secrecy around Tyrion’s death, according to the leaks, with the showrunners even pretending to film a fight scene between the Unsullied and Lannister soldiers in the dragon pit.

Last we saw Jaime he was riding away from a sobbing Ser Brienne. He’ll get captured by Daenerys’ army, but freed by Tyrion, who tries to get him and Cersei out of King’s Landing before the attack. Jaime will kill Euron, but he’ll be injured mortally and will make it to Cersei, where they’ll die together.

Tyrion, a good person to the very end, tries to save his sister. But she does die, by the hand of Arya Stark, or by Arya disguised as Jaime (not clear). She was on her kill list, after all. And then she dies with Jaime.

You know both Jon and Daenerys can’t survive, so either one or both of them has got to die. And it seems it’s going to be her (although maybe him, too).  She does destroy King’s Landing, but she gets killed, we *think* (it’s really hard to tell) by Jon Snow. It’s looking a bit like he’s forced to do it, which is pretty much the only way we can imagine it going down.

Like Tyrion, Jon isn’t a fan of Daenerys savage attack on King’s Landing. Also, Tyrion had told Jon that his family would never be safe because they’d be a threat to Daenerys’ claim to the Iron Throne. So Jon supposedly stabs her in the throne room.

As she’s dying, Daenerys manages to touch the now-destroyed Iron Throne, and then Drogon flies away with her body. Why do the CGI dragons mean so much more to me than any of the other characters?

And finally, Jon Snow. Finally, because as far as we know, both Arya and Sansa survive. (And I guess Bran, too? Although really, who cares?)

Supposedly Kit Harrington shot two different endings (which isn’t really that surprising): in one, he joins a new Night’s Watch crew instead of going into exile, and in another, he dies. The Night’s Watch thing is sort of confusing, because as far as we know, there are no White Walkers anymore?

And apparently, in the fifth episode, Jon will consider fighting Grey Worm after the Unsullied start their massacre, because of the brutality of their attack. From Reddit:

I think Unsullied are just indiscriminately killing (women and children) and Dothraki go on a rape rampage. Source didn’t get specific but I don’t see Unsullied doing any penetrating except with an actual spear. Cleganebowl happens this episode (5) and they do both die. Grey Worm and Jon have a big stare down and Grey Worm thinks Jon is gonna start killing Unsullied so he’s like waiting for Jon to turn on Dany so he can kill him but a Lannister soldier distracts Jon instead. Source says they are heavily saying Dany is going mad so I would put some weight to the leaks saying Jon kills Dany. I mentioned that to the source and they just said “Oh yeah definitely leading up to that” so take that for what it is. No mention of Arya unfortunately, she must be more for episode 6? Not sure. Honestly when they told me “bells make her snap” my jaw hit the floor. I’m personally not liking these, and the more silly ones (Bran becoming the King) have a very real possibility of being legit IMO. Hopefully the execution is better.

Well, are you happy now? You know what’s (probably) going to happen at the end, and there’s no point in even watching the show (but you know you’re still going to). Just do everyone a favor and, for the love of Arya Stark, don’t spoil it for anyone else!