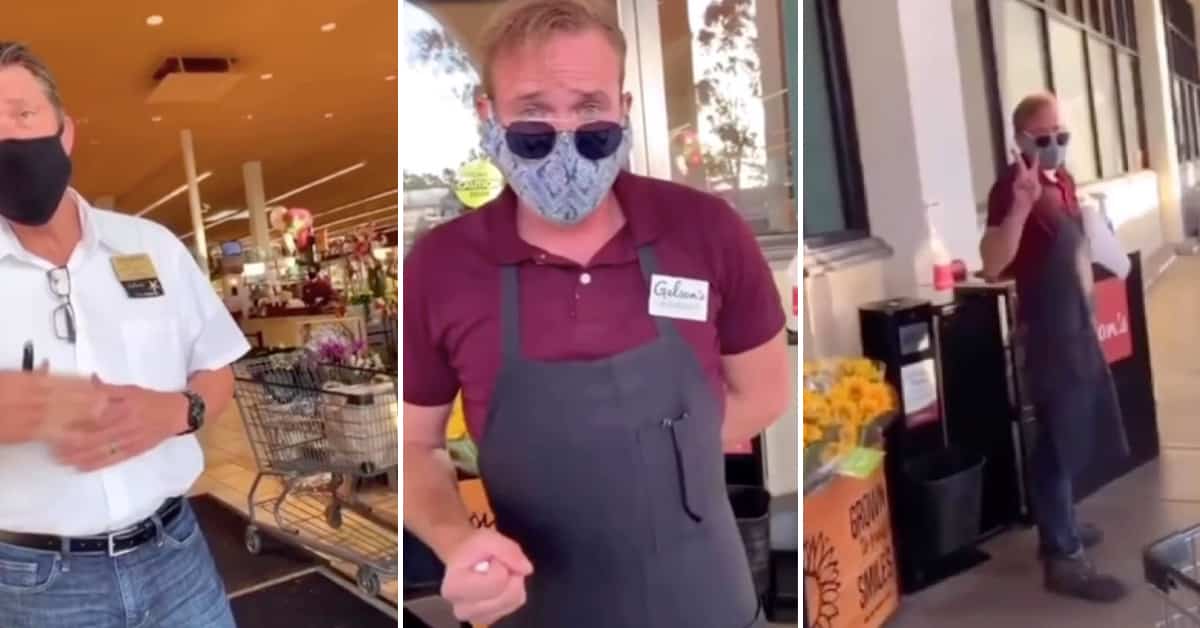 Whenever there is a reasonable request, there’s some conspiracy maniac trying to garner an online following by refusing to do it. A woman named Shelley Lewis has been dubbed the latest Karen, or white lady making a scene for not getting her way. In my opinion, Lewis goes far beyond the classic Karen. She’s also a flat-earther and anti-vaxx. This video of her being an absolute idiot at the Gelson’s isn’t just a freak out caught on camera—she very deliberately planned to have a confrontation with the management at a grocery store, and their ability to remain polite and chill in response is what makes it so perfect.

The clip was originally posted on Reddit on r/PublicFreakOut by u/bobamilktea1, and eventually made its way over to Twitter. It starts with Lewis having been denied entry to a Gelson’s supermarket in Dana Point, California, after refusing to wear a face mask.

She claims to have a disability that makes it impossible for her to wear a mask. The employees offer to shop for her. She claims she has “personal” things to buy at the Gelson’s she doesn’t want them to see! And that she would never give them her credit card or money!

I guess she doesn’t know what the checkout process at a supermarket involves because she was born ten minutes ago.

Karen gets upset that a store won’t let her shop without a protective facemask. She then tried to pretend like she’s the victim, despite the store giving her options. This is pure arrogance. https://t.co/qgFLhKjgxd #COVIDIDIOTS #COVID19 pic.twitter.com/OXV4EQLOgD

Lewis is so obviously hoping to get into a fight, but the manager, Brian, just keeps being polite and absolutely refusing to let her in. She claims he’s violating “HIPAA” which is absolutely wrong for the situation. A HIPPA violation is when someone’s medical information is being given out without their consent. It’s possible she means the store is not being ADA compliant, meaning refusing to accommodate disabilities, but those laws only ask for reasonable alternatives. Like offering to shop for her.

In short, no one is violating Karen‘s rights. And if she is up in arms over wearing a mask, just wait until she hears she has to wear a shirt and shoes to receive service.

To that, he says that he is grateful to have a job. Owned. Lewis is getting dragged in Twitter because people find her mix of entitlement and ignorance hilarious:

My favorite part is when Karen invokes Hipaa at the grocery store lmaoooo https://t.co/dSMxbZaTJv

Someone tell this Dana Point dunce that unless she gets her Pap smears done on aisle 4, HIPAA doesn’t apply.

I don’t know if she has a point about Hipaa but I DO know that she had options. If she couldn’t wear a mask she could have ordered pick up or delivery or had someone shop for her. She could have cared about protecting her fellow human but instead she chose to be a selfish POS. https://t.co/ny5yDtl0iW

Shelly… that’s not how HIPAA works, nor is there any discriminatory practice involved if you’re offered a reasonable accommodation. Shelly has no medical condition that prohibits mask wearing- this tactic is widely circulating in Antivax groups. #COVIDIOT https://t.co/UAgGZhFVu2

A continued thank you to our grocery store and frontline workers who have the patience and professionalism of saints these days. https://t.co/WZ2AIA4Gg0

Man, people these days use HIPAA like they use “free speech” https://t.co/DYwsOUHV8L

The story shouldn’t be about Dana Point Karen, aka Shelley Lewis, who demands to enter the Gelson’s store without a mask claiming some medical condition yet refuses to let others shop for her. It should be about the bartender who’s so happy to have a job he’s unfazed and dancing. https://t.co/VUzj0U39Va

The woman named Shelley Lewis at Dana Point has a poor understanding of what discrimination really is. Being denied entrance because you refuse to wear a mask during a pandemic is not an act of discrimination pic.twitter.com/REbHkpp6ud

The bad news is that Lewis is clearly stupid enough to consider this encounter a win.