An image shared to Reddit’s “Wedding Shaming” forum is making the rounds for its questionable…let’s say composition. The image, which is believed to have been taken at a wedding in the U.S., shows five women in red dresses kneeling in front of a row of smiling groomsmen. They’re definitely trying to make some kind of statement with the photo—I just don’t know exactly what. I don’t think I want to know. 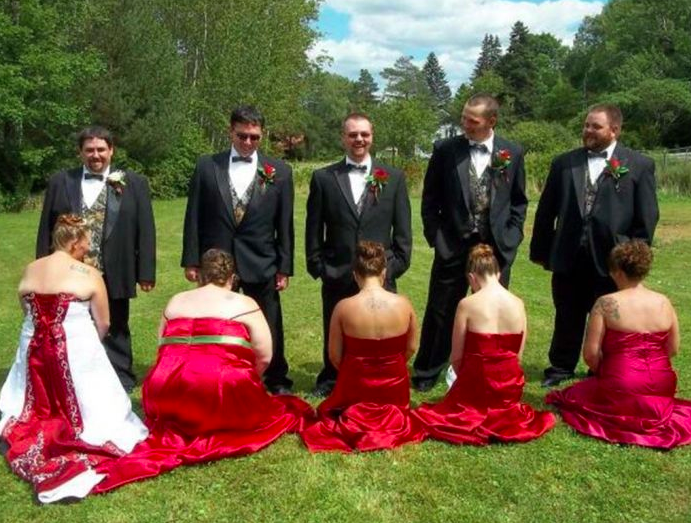 Folks have likened the photo to a scene from “The Handmaid’s Tale” because the women are dressed in red and are posing like they live in an oppressive patriarchy that demands they get on their knees and worship at the altar of male crotches. If that was the vibe they were going for, success! But also, gross!

“This trend is universally bad, but this iteration is the worst I’ve personally seen to date,” said u/Twaheela, the Reddit user who shared the image.

Reddit users were shocked and horrified at the “Handmaid’s Tale” wedding photo, saying it was “humiliating” and debating whether or not it was meant to signify submission or be a tacky sex shot.

“Definitely wouldn’t be part of this weird Handmaids Tale-inspired shoot,” one user said.

“Do you really want to show this to your children one day ‘Oh look at the picture where I’m pretending to b*** your Dad dear’,” another wrote.

“What the hell are they doing? Are they meant to look like they are b***ing the guys or is it meant to be a submissive thing? Either way this is really f***ing odd,” another user added.

“Tacky as it gets. I would be the bitch that would absolutely refuse to do the photo even if it made a giant scene at the wedding. Just being asked would probably end the friendship,” said one user.

“Yep. I’ve been a bridesmaid more times than I care to discuss and I would 100% not do this. The bride had better have said something about it ahead of time so I could tell her and she could replace me because Jason Momoa himself couldn’t convince me to do this,” added another.

What do you think? Tacky, disturbing, or it’s their wedding and they can take whatever kind of pictures they like?