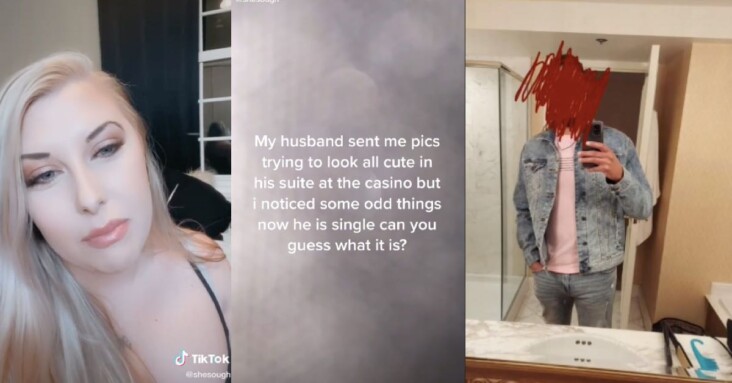 Cheating on your spouse is really awful thing to do…especially when you’re stupid about it.

Who can forget Meghan, for example, helped her boyfriend’s cheating go viral because he was clumsy about being on Tinder…

Recently, something equally as dumb and clumsy happened…

A man got dumped by his wife after sending her all the evidence she needed in a couple of selfies.

TikToker @shesough shared her story about getting some pictures from her husband while he was on vacation with some guy friends at a casino.

“My husband sent me pics trying to look all cute in his suite at the casino, but I noticed some odd things, now he is single. Can you guess what it is?” she wrote, before sharing two images.

The TikTok sleuths in the comments jumped on it immediately. The most common clue people noticed was the flat iron on the sink. Some came back, defending the man by saying that all hotel rooms have flat irons. Personally, I have never ever seen anything like that in a hotel, but even so, why is it out and plugged in?

The other thing is that he’s missing a wedding ring, there are some suspicious products out, and what might be a make-up bag or purse. Plus, the hair comb.

The TikTok has been really popular, so she popped in with a new TikTok, saying, “I just wanted to give you all an update.”

“So the very first thing I noticed when he sent me those two pictures was of course the straightener, it was just right there in plain sight,” she said, describing her own process. “The second thing I noticed was the purse on the floor, it looked like a Coach bag or maybe a Michael Kors bag.”

“And basically he has said that it wasn’t his hotel room and it was a friend’s room he was in, like another guy’s room that has a girlfriend or something. But I’m not believing it because it’s all too sketchy, why are you in somebody else’s room taking photos?”

“So if you’re there and you see somebody who is 6 ft 5 with brown hair then let me know, I’m trying to see if he’s lying,” she concluded.

She also wrote in the caption: “I think he’s lying he goes by the name pryze he will most likely be at the craps table somewhere in Biloxi at casino.”

A man who goes by the name “pryze” never is one.