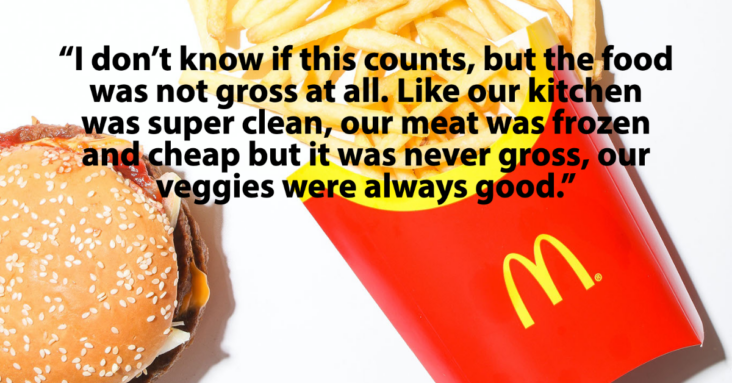 McDonald’s is a part of almost everyone’s lives. You either ate there a long time ago as a kid, still pop in every now in then, or you’ve had experience working at one. All McDonald’s serve the same food, but they are not all equal.

Growing up, I remember my McDonald’s had a fish tank—it was seriously the coolest thing (it was not for the Filet O Fish). Other McDonald’s, according to Redditors, are regular locations for drug deals.

People who worked at McDonald’s are spilling the secrets they discovered while putting together breakfast sandwiches and scrubbing the counters.

“My old McDonald’s had a basement.” — Neottika

“My first day on the job I was told to be on the lookout for the elderly gentleman who would try to sneak around the counter and pour the entire coffee pot into his mug while everyone was too busy to stop him.” — dustractor

“Drop any unopened chicken nugget sauce on the ground once — you’ve got yourself a sauce grenade.” — MisterFisk

“Depending on which one you work at, the parking lot is basically a meet-up for druggies/drug dealers and (at least where I was in New Mexico) people to meet up and have sex in their cars. As long as they kept their business to the middle of the night and didn’t cause any serious problems, we were told not to call the cops or make a fuss, mostly because they’d come in and buy food after their shenanigans. Soda and mini pies were really popular with heroin addicts. What I later found out is that management was actually told to let it slide by corporate, since everyone higher up was aware of how much money the “night crowd” brought in. I got to see many, many drug deals. I’m convinced I saw at least one arms deal, but I of course have no way of verifying that.” — Weird_Church_Noises

“The pickles are surprisingly aerodynamic. They stick to walls and (if you have the stones) managers shirts pretty well.” — MikelGazillion

“The official deodorizing spray they gave us is the most pleasant thing I’ve ever smelled in my entire life. Even now, I wish I could smell it again.” — tardissomethingblue

“Worked there in high school. Found out that if you put the middle of a Mac bun in the fryer and then add soft serve and strawberry topping, it tastes just like a funnel cake. Custom creations were the best part of working there.” — abbazabba_3000

“Former employee here. I found out that, when making 5 gallons of sweet tea, an entire 4-pound bag of sugar goes in. Sandwiches with round egg use real, cracked eggs. Folded and scrambled come from packaged goods in the freezer or fridge. I also had a manager that insisted more people purchase Filet O Fish when it’s raining out because they subconsciously associate the watery weather with fish. Anyway, he did some research by poring through sales of Filet O Fish for months and months and comparing it to weather data for each day. Turns out he found something like a 3% increase on rainy days and was very pleased with himself.” — AmbivalentWaffle

“I worked there when I was in high school. Not a secret, but I hadn’t known much about franchises before then. I hadn’t realized that McDonald’s could vary quite a bit in quality and professionalism based on who the owners were and what type of management/workplace they set up. I worked at a really good one (with good management, I mean), but some are shit.” — kara_anna

“Dehydrated onions, you put them in a metal thing and just add water. The thing is they still taste great! But I was shocked and happy that I didn’t have to go cut onions.” — HawkTheHawker