This TikTok user @Reesehardy_  uploaded a video of herself dancing while crying. Why? Self-expression. It is maybe the most teen video I have ever seen, expressing that particular sexual drama that comes with young love and access to Mariah Carey’s discography:

It became a pretty popular meme for expressing deep grief:

Me on the dance floor with my friends at 2am when I really just want tacos and my bed.
https://t.co/HvIwCJe1h6

Broke as shit but still agreeing to go out

when the pitch is accepted but now you have to write it https://t.co/gGOZymrxCP

And Reese recently posted an update:

She’s working some stuff out.

5. Smudge the Cat versus Taylor Armstrong

These are two memes brought together in perfect side by side photo format form.

According to the Daily Dot, the first image is a screenshot from The Real Housewives of Beverly Hills, in which Taylor Armstrong got into a pretty heated fight with Camille Grammar. The episode aired in 2011, but the picture has been used by people pretty frequently, because…well, look at it. Those are feelings and feelings can only be expressed through memes sometimes.

The second picture of a sour-faced puss became popular on Tumblr after it was posted by Tumblr user deadbeforedeath with the caption, “he no like vegetals.”

The tweet from @MISSINGEGIRL is what really set the meme off and it became the perfect way to illustrate when one person has a lot to say and the other person is refusing to engage. Or just doesn’t know what’s going on.

Smudge seems unaware of their viral fame, though the person who runs their account is taking full advantage of the “woman yelling” hashtag.

Taylor Armstrong is getting these kinds of comments on her Instagram, however: 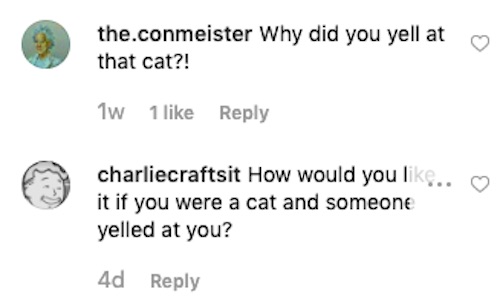 This is the dark side of becoming a meme.