Tensions are high and the pandemic is taking its toll on relationships everywhere. On the subreddit r/AmITheAsshole, many people are asking about pretty petty grievances, because even small things seem to be blowing up relationships. Poster u/woah_vertigo shared exactly that kind of story, in which his relationship got exploded over something pretty ridiculous.

The OP says he and his girlfriend “Jess” have been together two and a half years, they live together, they get along great and he was planning on proposing to her. So this whole fight is weird in a lot of ways.

Jess has a doll that her late grandmother passed down to her. She always has it on display because it reminds her of her and “brings her peace” (her words). The doll never bothered me much, besides it being a little creepy; I’m freaked out by dolls and clowns and the like. It was a bit uncanny that it was always in her room staring at us while we had sex and slept, but she was adamant on not moving it and I let it go because it was her room and her apartment. However, since we’ve been living together, I’ve started pressing her more about moving the doll. She keeps it in the corner of our bedroom facing perpendicular to our bed, so it’s not looking straight at us (a compromise we made) but it still makes me uncomfortable at times. For example, I’ll walk into the room or walk out of the bathroom and forget that the doll is there, and it will scare the hell out of me. 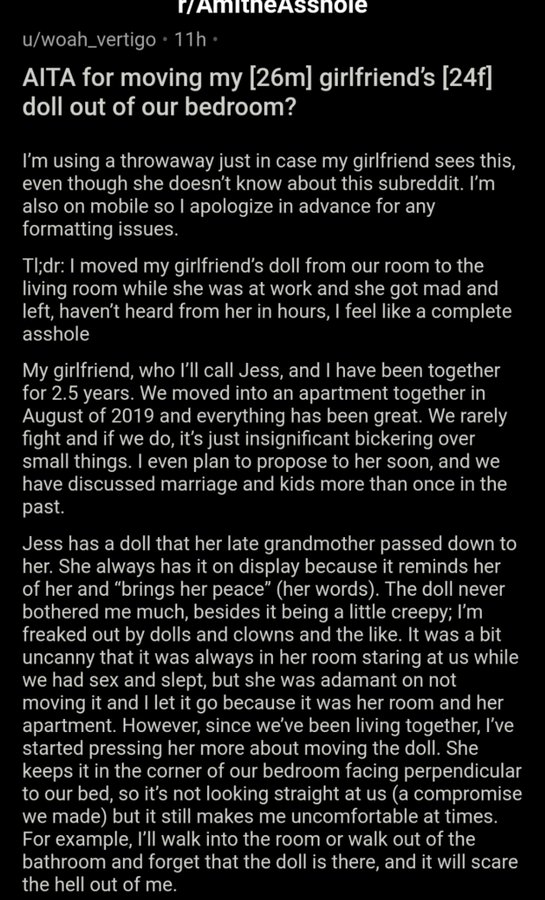 He says they’ve both essential workers and are in an out of the house. When he came home from his shift at the pharmacy, he saw the doll was once again facing the bed. He put it in the living room to take a nap:

I … woke up to her shaking me and asking me why I moved her doll. I told her I didn’t want it staring at me while I slept, and told her she shouldn’t have moved it to where it faces the bed. She should have known not to do that since we compromised on it before. She burst into tears, called me a “f*cking inconsiderate asshole,” grabbed the doll, and left the apartment. It’s been three hours and I have no idea where she is. I’ve called her phone and it goes straight to voicemail. I’ve called her sister, her best friend, and her mom and none of them have heard from her. I’m starting to get really concerned and I feel extremely guilty at this point. If she isn’t home by morning, her mom and I are going to try and file a missing persons report.

AITA for moving her doll? 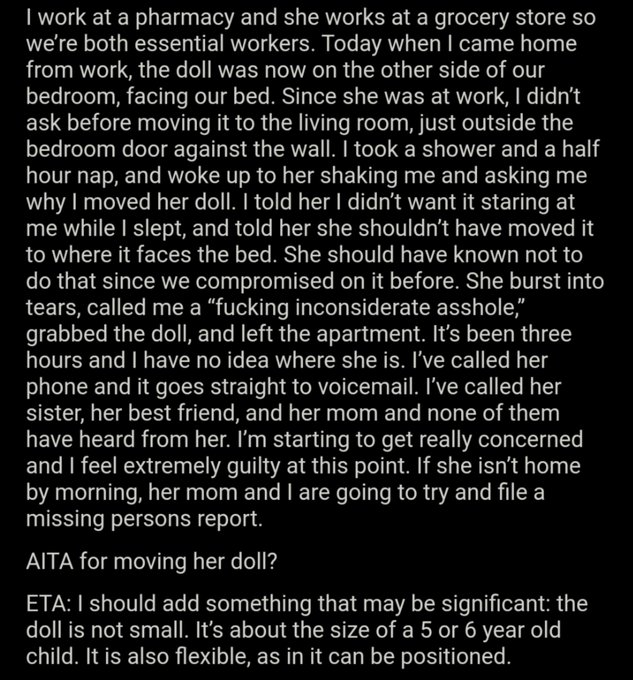 He later added some more info about the doll, saying it’s as big as a five or six-year-old child. He didn’t have a picture, but offered this as a comparable example:

Yikes! Folks told him adamantly that he is not in the wrong. Even if he shouldn’t have moved the doll per their agreement, refusing to talk to him about it is pretty unfair: 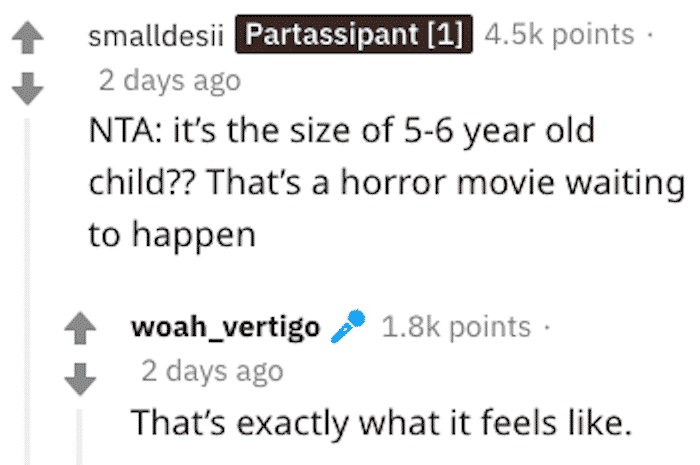 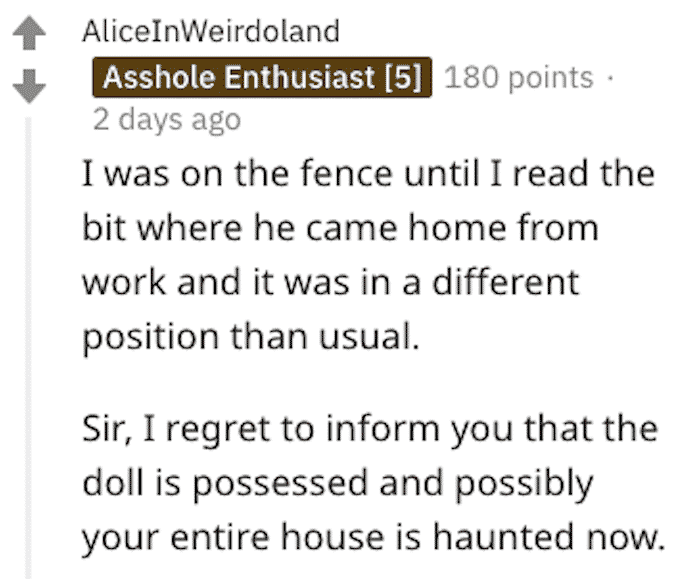 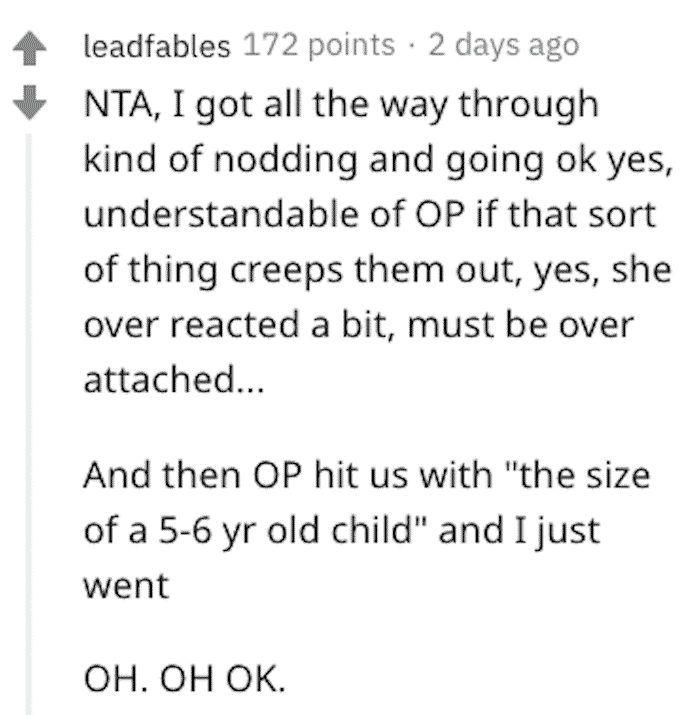 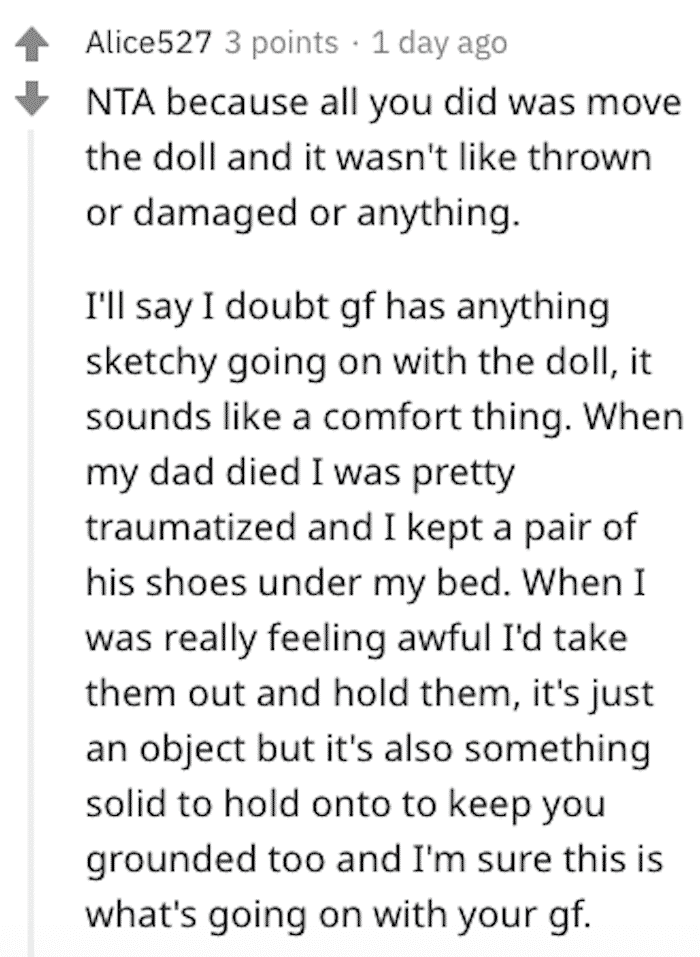 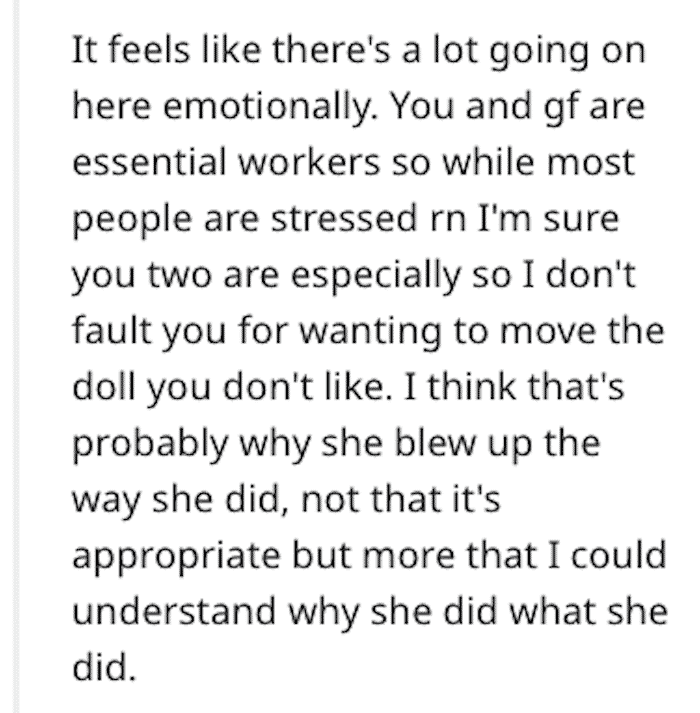 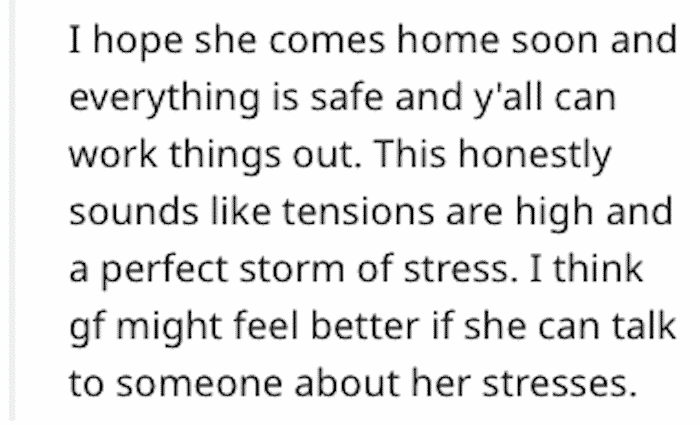 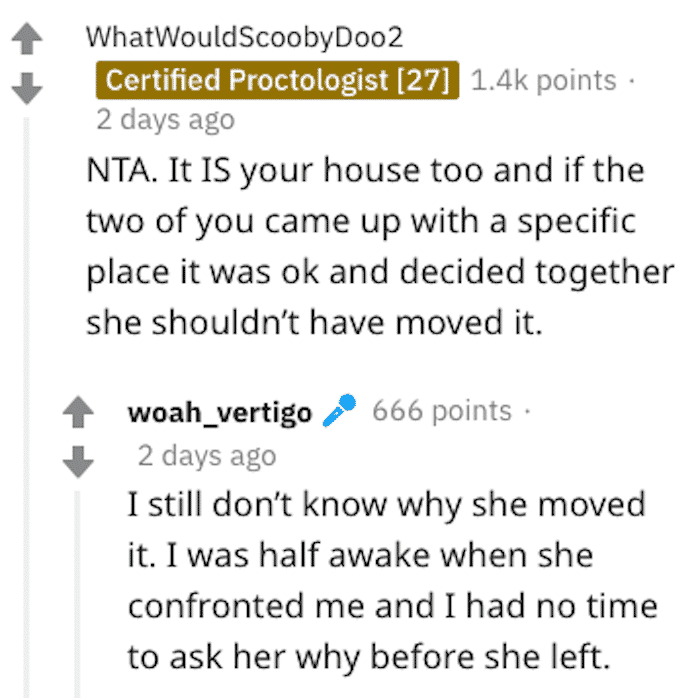 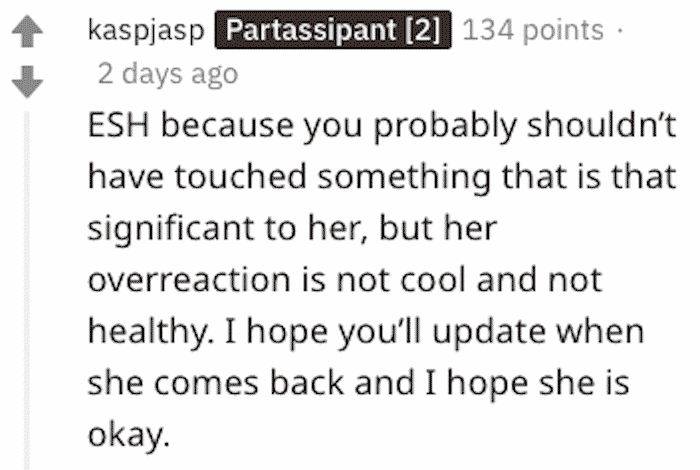 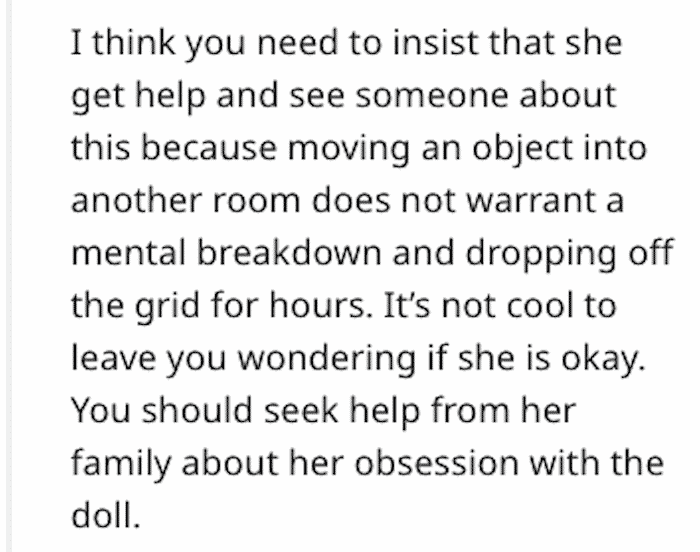 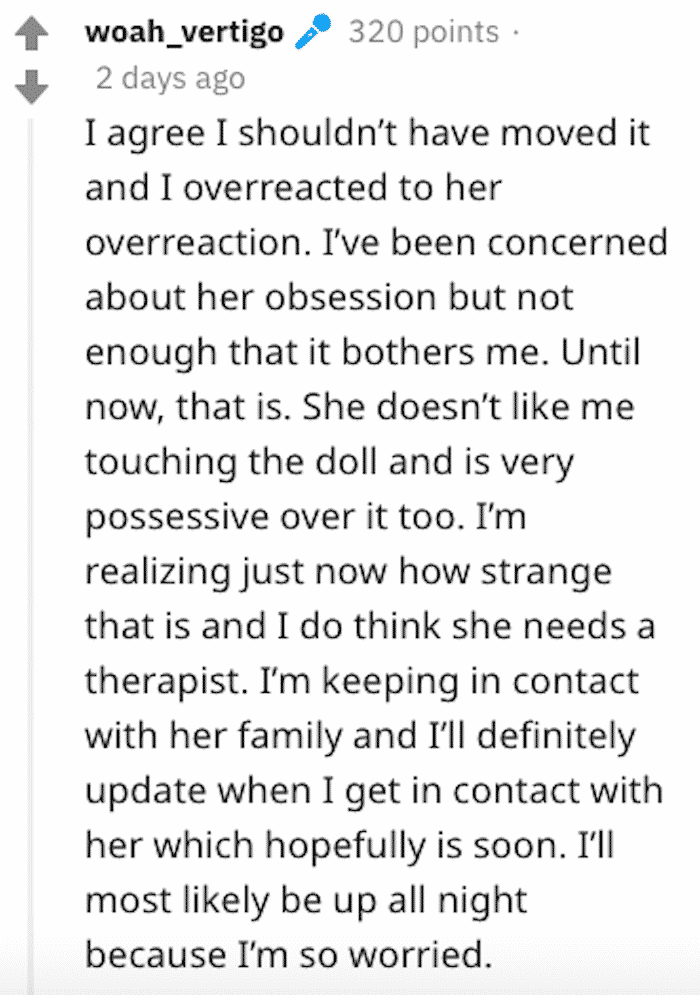 But it doesn’t really matter what the Internet thinks, because his girlfriend isn’t okay with it, according to an update:

Jess has been located at a friend’s house, and unfortunately has broken up with me. She refuses to come home until I’m completely moved out so I’m leaving to stay with my parents. I’m so confused and wish she would just talk to me. She refuses to talk this over. She just wants nothing to do with me. My heart is completely broken. Thank you to everyone who gave me advice and validated my feelings. I really needed it. If she ever decides to speak to me again, I’ll update. Thanks again guys.

Something tells me this is about more than a creepy doll, folks.  Sometimes a creepy doll is just a red herring.