There are a lot of people out there who dare to ask for far more they deserve and then get rude with people who don’t give it to them. Most of them end up on the r/ChoosingBeggars subreddit.

This story is about a guy who is getting married and wants to drive a fancy car on the day. He just doesn’t want it to be HIS fancy car.

The screenshots of the Facebook post highlighting this drama were shared by u/weezy_latez  who captioned it, “Anon doesn’t want to drive a free BMW or Tesla to his wedding.”

It starts with the groom writing, “Looking to borrow a car for my wedding say,” specifying the date and saying they’d need it for about six hours.

“Thank you,” he finished. Hey, if you like your friend and want to help them out with a car loan, that’s fine. It’s not too crazy to ask. It’s the responses to his friend’s offers that really make this wild.

“You can borrow my Tesla is you want,” a friend replies. The groom then asks for a picture. 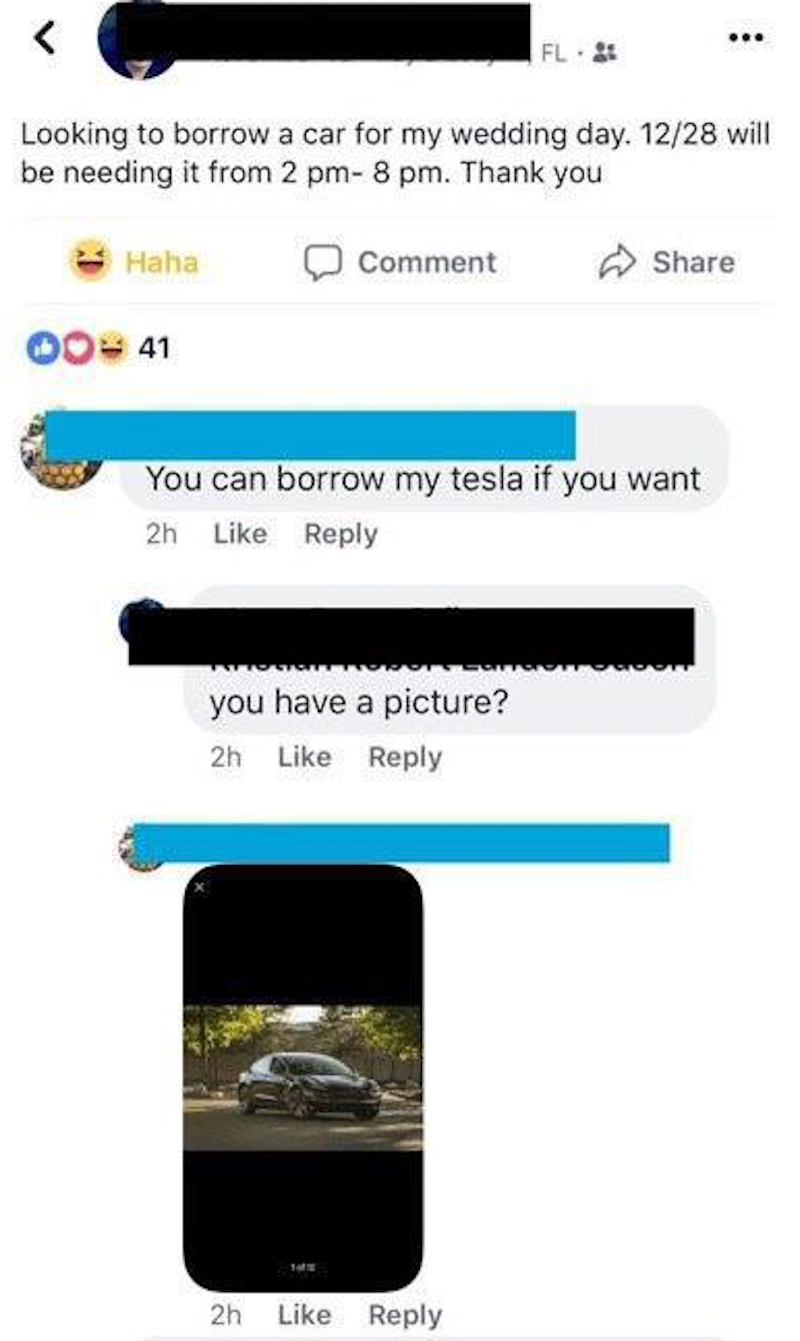 After seeing it, the groom answers, “Seriously? A mode 3? Trade it in for a model X and then maybe I’ll consider.”

Understandably, his friend is a little annoyed by this answer, and comments, “Dude, it’s just an option, you don’t have to be a d–k about it.”

“You offer me a model 3 and you think I’m the d–k?” the groom answers.

“Okay then NO,” the groom says, quickly whittling down his guest list. 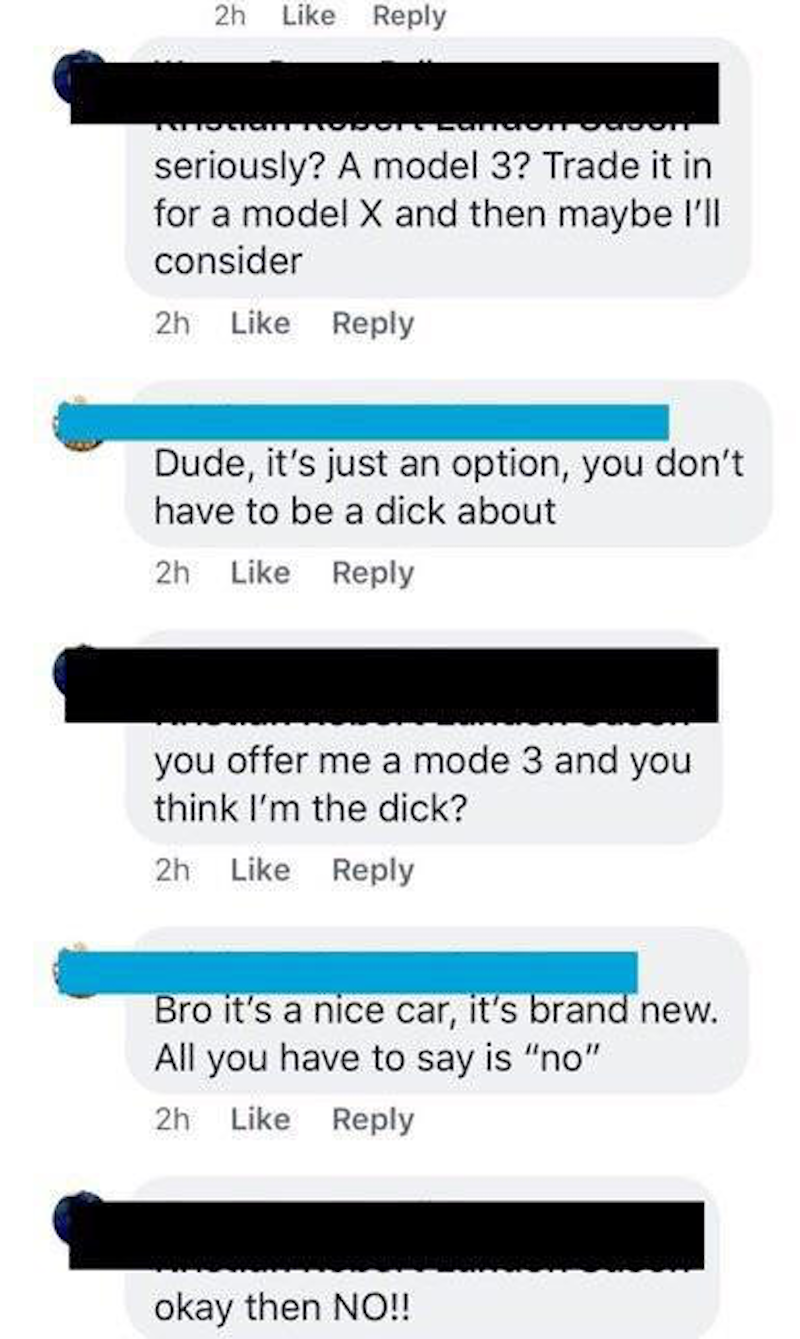 Despite this public exchange, another friend dares to try and help him, writing, “I will be out of town so I can’t make it to your wedding. You can borrow the M3 if you want.”

They include a picture, having learned half of their lesson from the first offer.

“Lol no thank you!!” the grooms replies, “Looking for something at least  over 100k it’s for my wedding not my 18h birthday party.” 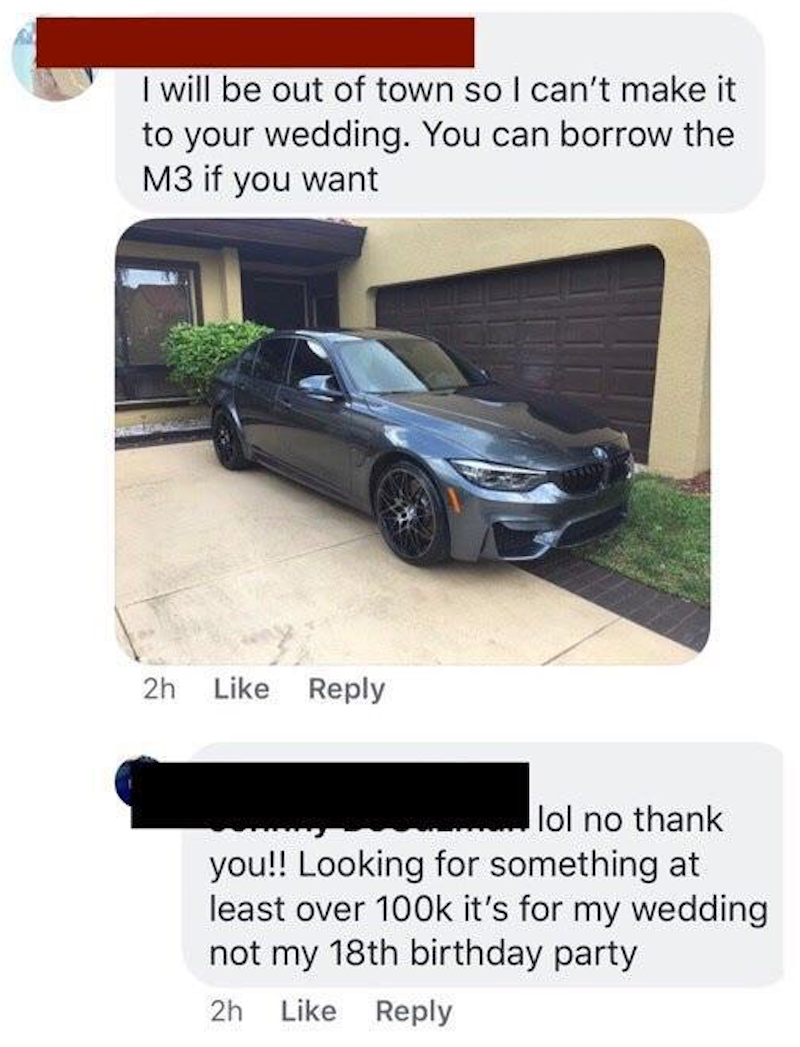 I really can’t believe this guy is for real. He thinks he’s too much of a big shot to ride in a car that costs less than 100k on his wedding day, and won’t shell out the cost of renting one.

The commenters really enjoyed picking his BS apart and discussing what they rode to their weddings: 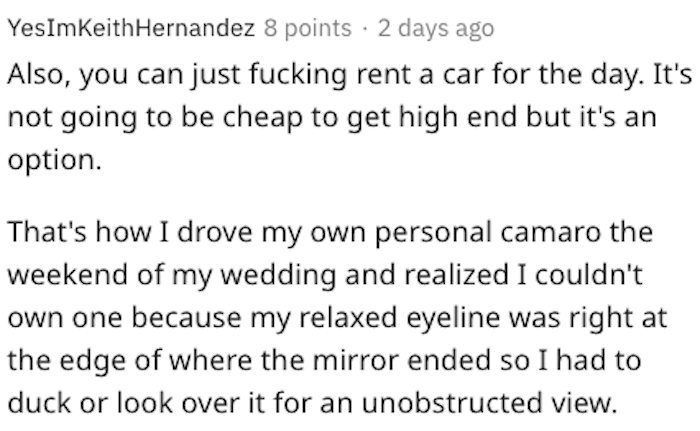 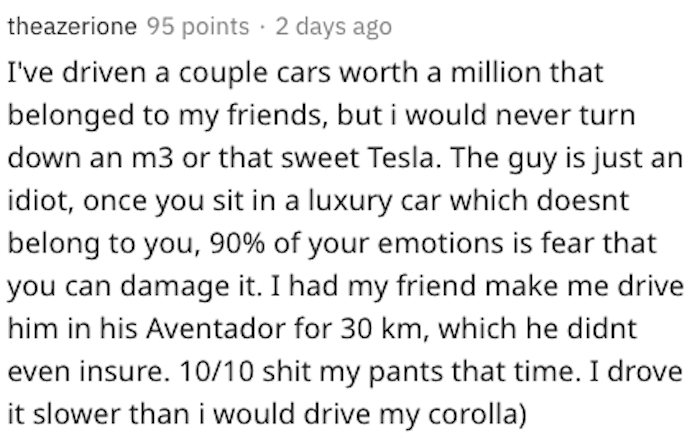 And a bunch also thought the story was staged or fake. That could definitely be, but I’ve found that often the strangest stories are the ones that end up being real. I hope this guy is real, just so he has to drive his piece of junk to the church.